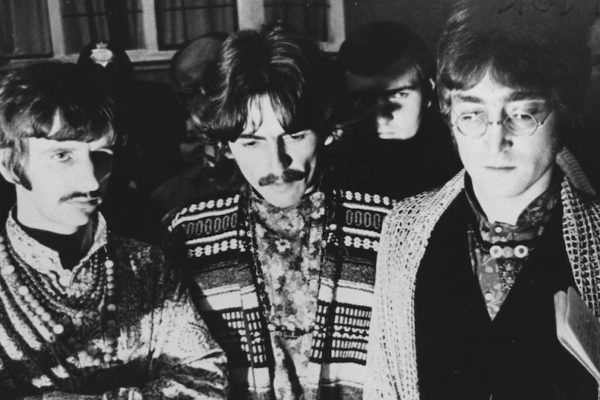 Several years back, we marked the 50th anniversary of the release of The Beatles’ “I Am The Walrus.” Written primarily by John Lennon for the TV movie Magical Mystery Tour, “I Am The Walrus” features a cryptic Lennon lyric with a bizarre chorus, an innovative arrangement from producer George Martin that includes sprechgesang (don’t worry, I’ll define it in a moment), studio trickery from engineers Geoff Emerick and Ken Scott, and an excerpt from Shakespeare’s King Lear. All of this adds up to create The Beatles’ psychedelic masterpiece. Here are ten things you may not know about “I Am The Walrus.”

See Related Post: “We Are All Together: George Martin and ‘I Am the Walrus'”

1. The song owes a huge debt to Lennon’s favorite hallucinogenic…
Lennon wrote the bulk of the song during several LSD trips. During one trip, he heard the two-note pattern of a police siren passing by. The sound morphed into the opening notes of “I Am The Walrus.” They are even mimicked in the two-note motif in the verse (“Mis-ter ci-ty p’lice-man…”).

2. … And to Quarry Bank High School
“He has too many of the wrong ambitions and his energy is too often misplaced.” That was a description of John Lennon written by the headmaster of Quarry Bank High School in 1956. Just ten years later, a student at Quarry Bank wrote Lennon to tell him that they were analyzing Beatles lyrics in class. Lennon decided to give the students (along with music critics) something a little more difficult to analyze. So, he turned an old playground nursery rhyme that he sang as a child (“yellow matter custard/green slop pie/all mixed together with a dead dog’s eye”) into the line “yellow matter custard dripping from a dead dog’s eye.”

3. The Mysterious Eggman
The title of the song was based on the poem “The Walrus and The Carpenter” by one of Lennon’s favorite authors, Lewis Carroll. It wasn’t until later that John realized that the walrus was the bad guy in the poem! There is no “egg man” in the poem, although Humpty Dumpty does make an appearance in Through the Looking Glass. Surprisingly, Eric Burdon, lead singer of The Animals, stepped forward to claim that he was the egg man referenced by Lennon. Burdon was known as “Eggs” to his friends, due to his strange fetish of breaking eggs over naked women.

4. The Beatles Were Crying
At the end of each verse, Lennon sings “I’m crying.” The Beatles had been doing a lot of crying around this time since their manager Brian Epstein had recently died. In fact, “I Am The Walrus” was the first song The Beatles recorded after Epstein’s death four days earlier. “I’m crying” could also be an allusion to one of The Beatles’ favorite singers Smokey Robinson who had sung the same phrase in the 1965 song “Oooh, Baby Baby”.

5. A Vocal from the Moon
Lennon, one of rock’s best vocalists, was always frustrated by the sound of his voice. For “I Am The Walrus,” he asked engineer Geoff Emerick to make his voice sound like it was coming from the moon. As always, Emerick turned Lennon’s strange request into the perfect effect. Violating EMI’s strict rules, Emerick had Lennon record his vocals using a low-fidelity talkback microphone (typically used by an engineer in the control room to “talk back” to musicians in the recording studio). This helped create one of rock music’s first distorted lead vocals.

6. The Human Click Track
The recording of “I Am The Walrus” was incredibly complex, ultimately taking 25 takes to complete. On one of the earlier takes, Lennon was playing an electronic keyboard called a Hofner Pianet (some sources say it was a Wurlitzer electric piano) and was making a lot of mistakes. Ringo was having trouble keeping a steady tempo — understandable, considering the song was long with a slow tempo. On top of all this, emotions were high due to Epstein’s recent death. George Martin was getting frustrated and his temper was beginning to show. McCartney jumped into action and saved the day by playing tambourine next to Ringo, acting as a human click track to keep Ringo in sync with Lennon’s keyboard.

7. What the Hell Am I Supposed To Do With This?
When Lennon first performed “I Am The Walrus” for George Martin, he asked Martin for the producer’s opinion. “Well, John, to be honest, I have only one question,” Martin said. “What the hell do you expect me to do with that?!?” Luckily, the always inventive Martin came up with an innovative orchestral arrangement that fit the song perfectly. It features eight violins and four cellos, three French horns, and a contrabass clarinet — a rare member of the clarinet family that was a favorite of Frank Zappa. In fact, Zappa loved “I Am The Walrus,” and played it often in his concerts.

8. Stick It Up Your Jumper
Martin’s arrangement didn’t stop with the orchestral instruments. He clearly felt that Lennon’s song needed something more. So, he hired the Mike Sammes singers, known for their work on Disney films and TV themes. Rather than create a standard vocal arrangement, Martin took advantage of the singers’ excellent score reading skills and created a sprechgesang arrangement. Sprechgesang, which means “spoken singing”, is a vocal technique halfway between singing and speaking. In his score to “I Am The Walrus,” Martin had the Mike Sammes singers make whooping sounds, laugh, snort, and shout phrases like “Oompah, oompah, stick it up your jumper!” Nothing like this had ever been heard on a popular music recording.

9. Thou Hast Slain Me
At the end of the very complicated mixing sessions for “I Am The Walrus”, Lennon had an idea that made Martin roll his eyes — mixing a live radio broadcast into the recording. It took some engineering work from Geoff Emerick (plus some paperwork to get permission from his bosses at EMI) to patch an AM radio into the console. During the mix, Ringo manned the radio while John instructed him when to turn the knobs. Coincidentally, Ringo stumbled on the BBC production of Shakespeare’s The Tragedy of King Lear. The broadcast was at the point of Act IV, Scene VI, where the steward “Oswald” is killed.

10. Walruses in White Satin?
Many artists have claimed that they were part of a Beatles recording even though no proof exists. A few years ago, Ray Thomas of the Moody Blues claimed that he and Mike Pinder sang backing vocals on “I Am The Walrus.” This claim is not backed up by any other source. (Thomas also claimed that it was his idea to put harmonicas on “The Fool on the Hill” and that an adventure with a groupie inspired McCartney to write “She Came In Through the Bathroom Window.”)

Bonus: Who IS the “Walrus?”
When John wrote and recorded “I Am The Walrus,” it was weeks before he donned the costume for the famous sequence in Magical Mystery Tour. Mysteriously, the soundtrack album included a comment below the song listing: “’No, you’re not!’ said Little Nicola.” John confused things even more when he sang, “The walrus was Paul” in the White Album song “Glass Onion.”

Some conspiracy theorists claimed that the walrus was a symbol of death in Greek and Eskimo mythology. The fact that this was blatantly false didn’t matter. It was one of the clues (along with the King Lear death scene) that helped to create the “Paul Is Dead” myth.

Eventually, Paul had the last laugh when he wore a walrus mask for the video to George Harrison’s 1988 song “When We Was Fab.” Finally, he was the walrus.