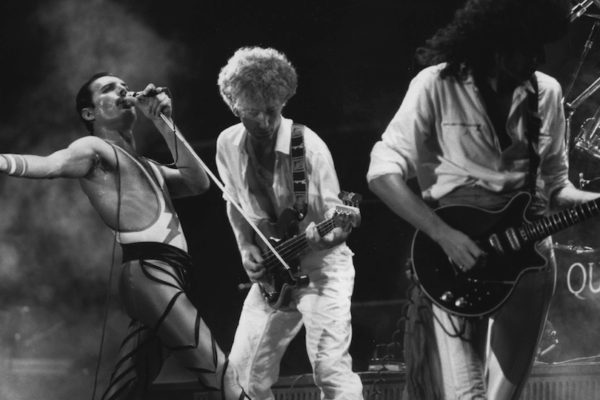 Although Queen is one of the biggest bands of all time, they are still a hit-driven act in the eyes of the general public. There’s nothing wrong with successful singles, but I’ve always thought that at the core of the band’s philosophy lies a playfulness and musical diversity that can only be experienced when listening to their full albums. So forget about Radio Gaga for one second and let’s explore ten of their most interesting deep cuts.

10. “Liar”
Although credited to Freddie Mercury, my favorite thing about “Liar” is that it’s a showcase for the band as a whole. The rhythm section is incredibly tight, while May’s crunchy guitar drives this 6-minute, multi-part epic taken from their debut album. There are some people who swear Queen was never better than in their pre-fame early years, and while I don’t necessarily agree, a song like this would definitely make a convincing case for that statement.

9. “Dragon Attack”
“Dragon Attack” is one of the songs that indicated the band’s shift towards a more rhythm-driven sound with the 1980s The Game album. Every member seems to be having fun playing this funky, groovy gem, and the fact that it became a live favorite proves that it was equally as fun for the audiences to hear. Plus, bassist John Deacon once said it was his favorite Queen song ever, and who are we to disagree?

8. “Back Chat”
If “Dragon Attack” merely signaled a change, then “Back Chat” represents a full dive into that new style with no looking back. It is one of the band’s full-on funk/disco tracks, taken from an album that still polarizes listeners to this day. Me, I think it works wonderfully – it is another testament to just how many genres Queen could do convincingly and how tight of an instrumental groove they could lock into. It is impossible to sit down when listening to this one.

7. “You Take My Breath Away”
Those under the impression that Queen was all about pomp and stadium anthems should give “You Take My Breath Away” a listen. I know the effect it had on me – having grown up with “Bohemian Rhapsody” and “I Want to Break Free” being played to death by radio stations, this song felt like a fresh breath of air (excuse the pun). It’s nothing more than Freddie singing a love ballad accompanied by his piano, but what a gorgeous and affecting ballad this is, making the subject of the lyrics sound more like a deity than an actual human being.

6. “Mustapha”
“Mustapha” may sound like just a warm-up exercise for Freddie Mercury’s voice, but even so, it is the exercise of one of rock’s greatest vocalists. He seems to be making up the lyrics as he goes along (featuring words in both Arabic and English), but they’re set to such an infectious melody that it’s impossible not to sing along. And that metallic guitar break? Classic Brian May right there.

5. “Stone Cold Crazy”
One of my favorite Queen characteristics has always been their knack for experimentation. Especially in the ‘70s, it seemed like the band outright refused to settle upon only one genre, no matter how well it suited them. The fast, frantic rocker “Stone Cold Crazy” became one of the earliest examples ever of the thrash metal genre and was later even covered by Metallica. It seemed like just another day in the Queen world though – they pioneered an entire genre and then rapidly moved on to other things never to return to it again.

4. “Spread Your Wings”
An interesting chapter in Queen’s history is John Deacon’s evolution as a songwriter. 1974 saw him make his debut with “Misfire,” a nice enough song, and by the following year he already wrote his first classic with “You’re My Best Friend.” Fast forward five years later and his “Another One Bites the Dust” proved to be one of the band’s biggest US singles. Largely forgotten between those two we can find “Spread Your Wings,” a song that is no less impressive. It shows just what a good ear for melody Deacon had, and even the lyrics are among the band’s best: an encouragement to quit your dead-end job and fulfill your potential that is highly relatable.

3. “The Prophet’s Song”
Perhaps Brian May’s own answer to Freddie’s “Bohemian Rhapsody,” this is one of the two lengthy epics on their magnum opus A Night at the Opera. “The Prophet’s Song” was inspired by a dream May had about the Earth being flooded and indeed, this is the feeling that they tried to convey with the song: one of total apocalypse and chaos, where “The earth will shake in two will break / And death all around will be your dowry.” The only thing that’s left after Mercury announces this apocalypse with all the might in his voice is a couple of lonely, desperate voices echoing from one side to the other in the song’s ambitious mid-section.

2. “White Queen”
Queen’s second album was conceptually divided into two sides – White Side is almost entirely written by Brian May, and Black Side with compositions by Freddie. On one hand, it showcased the band’s “prog” sensibilities; on the other, it established two equally distinctive and prolific song-writing forces (with a third one on its way). May’s “White Queen” is as gorgeous a ballad as any that Mercury has ever written, featuring one of my personal favorite Queen melodies at the end of each verse – right when they sing “The white queen walks and the night grows pale…” It creates such a majestic, nearly “royal” feel, especially with those haunting harmonies underneath and the way it transitions into the heavy chorus.

1. “Death on Two Legs”
Rock music is no stranger to artists revolting against their record labels and managers, whether its The Rolling Stones recording “Cocksucker Blues” just to spite Decca or Pink Floyd parodying the whole music industry in “Have a Cigar.” Freddie Mercury wrote “Death on Two Legs” in the same line of thinking, a “fuck-you” letter to the band’s ex-manager, and ended up with what is perhaps Queen’s most vicious song ever. Never mind subtly hinting at the target, the song assassinates its character head-on with lyrics such as “You’re a sewer rat decaying in a cesspool of pride”. Conducted by Freddie’s always-impressive vocal acrobatics and orchestrated by Brian’s guitar riffs, this is simply one of the band’s most accomplished compositions.

PS. David Bowie was a famous partner of Queen — and he had a secret talent.  Plus, Queen is included in the list of the world’s best-selling albums.

16 comments on “10 Underrated Songs by Queen”