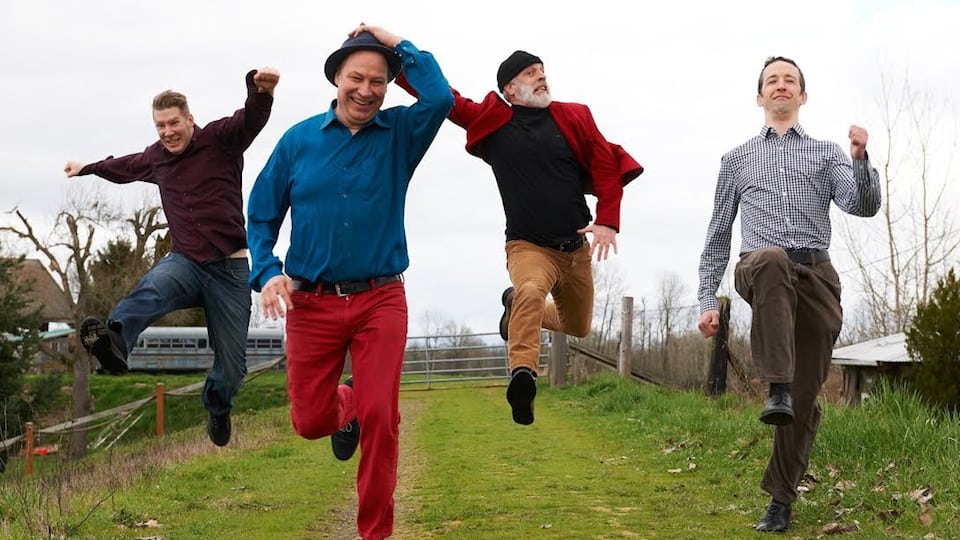 Contemporary classical ensembles don’t get a ton of mainstream attention. Undoubtedly, you’ve heard of Kronos Quartet and maybe Bang on a Can, or Ethel. But how about 3 Leg Torso? This Portland chamber group has been described as “a unique American treasure” by Steve Berlin of Los Lobos and a “band of great whimsy” by Oscar-winning filmmaker Joan Gratz. On the eve of their performance with the Portland Festival Symphony, CultureSonar fielded some questions to accordionist Courtney Von Drehle and violinist Bela Balogh, the two founding members who have been composing for and performing with this band through its various iterations as it’s traveled all over the world for the last 20 years.

Related: ”Who Are the Rock Stars of Classical Music?”

CultureSonar: Your self-titled debut album came out 20 years ago. Are there any songs from that release which still pop up on your setlist?

Courtney Von Drehle: We do play “Divertissements for Performing Bears,” “Morrocan Jig,” and “Baym Rebyn in Palesteena.” Even though we were a violin/cello/accordion trio back then, and now perform as a quartet up to performing with full symphony orchestra…, these tunes sound great with our expanded lineup.

Bela Balogh: Yes, I would like to re-visit “Stolen Tango,” “3+3+3+3+3”….these are Courtney’s tunes, and for some reason, he’s not interested in playing them again. I think they’re brilliant compositions.

CS: You did a pair of CDs with spoken word artist David Greenberger: Legibly Speaking and Whispers, Grins, Bloodloss and Handshakes. How did this come about?

CVD: We were paired with David through the Portland Institute of Contemporary Art. They had had David come out the year before and interview and record the residents of some local elderly homes and then had suggested that we work together, as David has a history of working with musicians to come up with music to his encapsulation of these interviews… What a great experience. David is a very interesting fellow, a good communicator, [and a] super nice guy who notices odd details. I think he is interesting because of the unique way his mind works and how he sees things. He came out to Portland and we threw it all together in a fairly short period of time, us playing music and him shuffling through pages of transcribed interviews looking for what would fit; as we got things paired together then we’d fine tune them. We went on an East Coast tour with the show and stopped in at WGBH in Boston and recorded a live stereo direct album of pieces that we had come up with to add to the East Coast Tour. That CD — Whispers, Grins, Bloodloss and Handshakes — I like a lot due to its spontaneous nature. Some of the things we were just making up on the spot. David and 3 Leg Torso have plans to work together again in the future.

BB: I look back with great fondness of our work with David Greenberger. I especially loved our three-week tour of the East Coast performing in a number of unique venues, including the Peabody Essex Museum in Salem, Massachusetts.

CS: 3 Leg Torso has played at CBGB, the Getty Center, the deYoung museum. What’s the strangest place you’ve ever performed?

BB: Wasn’t quite strange, but performing half naked on a beach in Thailand for a wedding was probably the most unique.

CS: Are there other practitioners of contemporary chamber music that you’re fans of?

CVD: I’m a huge fan of Mark Orton, whose band, Tin Hat Trio, was coming up at the same time that 3 Leg Torso was, and Tin Hat – with a violin, accordion, and guitar – had a sound that seemed tangentially related to what we’re doing. Mark is now a full-time film composer, and he’s always writing at the highest level and I’m always interested and liking what he is doing. Being an accordionist, I also keep an ear on some of the stuff in the accordion world. Motion Trio, an accordion trio out of Poland, is exceptional and composes a wide diversity of music that utilizes the orchestral potential of the accordion. David Douglas’s project, Charms of the Night Sky, with Greg Cohen, Mark Feldman and (one of my accordion heroes) Guy Klucevsek, put out an album eponymously titled that just blows my socks off. Amazing compositions and moody, intimate playing. Lastly, although not still active as far as I can tell, The Amestoy Trio, a French trio with guitar, tuba, and accordion, put out an amazing album called Le Fils, which sits somewhere between gypsy jazz and chamber music. It is one of my all time favorites.

CS: If you were to pick one 3 Leg Torso song to share with someone unfamiliar with your music which one would it be?

CVD: For me, that would be either “The Life and Times and Good Deeds of St. Penguin” or “According to Chagall.” “St Penguin” has an orchestral feel and a wide expanse of emotions — a kind of tour de force through much of what we do. “According to Chagall,” which is more mellow than some of our pieces, has an endearing nature and I like the way it unfolds compositionally.

BB: I agree with Courtney about this one.

CS: I can hear echoes of Nino Rota, Satie, Saint-Saens, even Danny Elfman perhaps. Who’s a contemporary composer you find inspiring that people might not expect?

BB: George Harrison’s escapade into Indian music has indirectly inspired me to write one of my most recent tunes “In the Morning Sun”

CS: You’ve toured all over the country. Outside of Portland, what’s your favorite city in which to perform?

BB: I’ve always liked San Francisco because in the morning after a show, I get up early to walk around the city by myself. It stimulates me as well as clears my head.

CS: Courtney, how many accordions do you own? Do you have a favorite? Why?

CVD: I do have a lot. I’m not sure how many. I think I’ve had upwards of 20 but recently sold off a few. I have a few favorites and more recently one of the things I’ve looked for and enjoyed in an accordion is both great sound (good reeds) and being as light as possible! Probably the one I use the most, a Giulietti accordion (an Ernie Felice style accordion for those that are curious), I first heard when my friend and great local accordionist Russ Rossi was performing with it over 20 years ago. It had a smooth sound, like a rich-leather upholstered Cadillac… Several years later Russ was willing to sell it to me, but that didn’t mean he stopped loving it. We sold it back and forth between each other a total of seven times!

BB: I have five violins, and I f**king hate them all except for one. It’s a Wurlitzer – a production violin from the 1920s that I got from my dad. It sounds great, I don’t care if I spilled beer on it. Now that I am a teetotaler, I love it even more.

0 comments on “Talking to Two Legs of 3 Leg Torso”