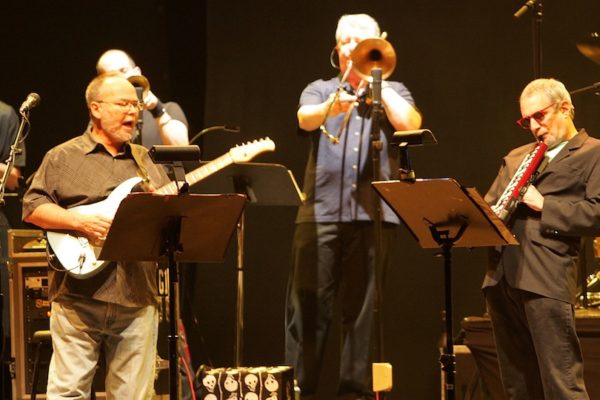 How far would you go in your devotion to your favorite band? Sure, you’d make your friends listen to their music. Maybe you’d drag them along to a show. But would you write a whole book on them? How about creating and recording arrangements for tunes that they’d only tested out as “piano with vocals” demos? Because writer-rocker Anthony Robustelli has gone to those latter extremes with his book Steely Dan FAQ: All That’s Left to Know About This Elusive Band and his CD The Steely Dan Sessions: Interpretations of Unrealized Classics. Need further evidence of his passion for all things Steely Dan? Read on.

Q: Was there a moment or song when you knew your appreciation for Steely Dan exceeded that of the normal fan?

A: When Steely Dan’s sixth LP Aja was released, my older brother got a copy and as soon as I heard it I was hooked. I might have only been seven but I had already been playing piano for a few years and was an obsessive Beatles fan. My father had a big band in the late ’40s and early ’50s so I had been exposed to jazz music from a young age and had seen everybody from Buddy Rich to Ahmad Jamal live. So when I first heard Steely Dan I realized that it was the perfect amalgamation of rock and jazz. The sophisticated chord changes played over an R&B backbeat laid the foundation for heady lyrics that told stories that seemed otherworldly to a second grader.

A few years passed and Steely Dan had broken up, so when I entered Tower Records and saw a copy of the new Donald Fagen album, The Nightfly, I was extremely excited. The album was on constant rotation and I soon filled out my Steely Dan collection with the albums I was missing. I began turning on any friends that would listen, and when I heard that Fagen was playing at The Beacon Theatre with the New York Rock and Soul Revue I immediately bought a ticket. The next year, Becker joined the tour. In 1993, I began my quest to see them live as much as possible.

Q: Do you have a favorite album within their canon?

A: It’s hard to pick just one album because they’re all so different. Although many people think of Steely Dan simply as a jazz/rock band, they’ve explored various genres throughout their career including country, Latin, west coast pop, Beatlesque rock, funk, and R&B.

If I’m in the mood for the more rockin’ side of Steely Dan I’ll gravitate toward the first two albums. If I’m feeling like a hodgepodge of different genres I’ll put on their third, Pretzel Logic. For a mix of blues and jazz I’ll head for Katy Lied. The Royal Scam is always good for a funk workout and Aja and Gaucho will satisfy my craving for the slicker side of the band. Their two albums from the 2000s find their way into heavy rotation as well with their funk grooves, complex horn arrangements, and intricate keyboard and guitar interplay.

Q: What’s a song you feel is unjustly overlooked that you’d like to turn fellow Steely Dan fans on to?

“Night by Night” from their third album Pretzel Logic is an overlooked gem. It’s arguably one of the funkiest songs that Steely Dan ever recorded with Becker and guitarist Dean Parks laying down a unison line over the foundation of Jeff Porcaro’s syncopated drum groove and future Toto band mate David Paich’s Stevie Wonderish clavinet part. The horns round out the production with a blend of smooth unison lines, harmonized hits, and chordal pads, a sign of what was to come on future recordings. Once again Jeff “Skunk” Baxter steals the spotlight with his distorted rhythm guitar hits and lead licks before ripping into yet another fantastic solo. He returns for another solo after the last chorus that builds the song to a frenzied fade out.

Donald Fagen delivers this tale of despair as a solo vocal for the entire song with one exception: whenever the title is sung. During the chorus the background vocals support the lead vocal and are relatively tame, but on the outro the vocal harmonies become especially dissonant creating an apocalyptic mood behind Baxter’s frantic and furious guitar solo.

Q: The core of the band was always Walter Becker and Donald Fagen while, over the years, the other members have changed. Who would you say is the most important of their collaborators?

It depends on how you define “collaborator.” I think that in the early days guitarists Denny Dias and Jeff “Skunk” Baxter were essential to their sound. They were polar opposites as guitarists, which gave Becker and Fagen myriad options when it came to solos and rhythm guitar parts, although they still found space for guitarists Elliott Randall, Rick Derringer, and Dean Parks on the first three albums.

Once they began using session musicians things changed. Bassist Chuck Rainey played on more Steely Dan tracks than any other musician, besides Becker and Fagen, and his playing style had an effect on how they approached certain songs. He contributed to every album from Pretzel Logic to Gaucho and is featured on classics like “Kid Charlemagne,” “Josie,” “Black Cow,” and countless others. Since they used so many different drummers and guitarists over the years, but only a handful of bass players, I’m going to give Chuck Rainey that honor.

Q: You’re a musician yourself. How has Steely Dan most influenced you in that regard?

I have always been into harmony and interesting chord changes and although I’ve been influenced by the Beatles, Stevie Wonder, Elvis Costello and numerous other artists, I think that my music tends to be compared to Steely Dan because of its harmonic and lyrical content and its use of funk and R&B grooves. I got my Bachelor’s Degree in Jazz Performance from NYU so I not only played in jazz ensembles but learned arranging as well, which took my writing to a new level. I have always tried to blend my love of straight ahead jazz, rock music, and funk and R&B into my own unique style and Becker and Fagen were the first band that I ever heard do that successfully. I have always strived to achieve their level of stylistic integrity in my own work.

1 comment on “Looking for the Ultimate Steely Dan Expert? We Found Him!”