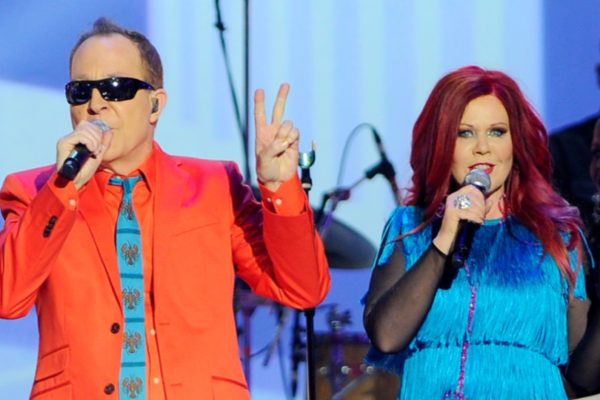 It can be hard, given the harsh light of nearly three decades to rip away context, to see how a song that peaked at number 56 counts as “narrowly missing” the Top 40, but in 1980, the B-52s placing their debut single even that high counted as a major and unforeseen victory for what was then being called “New Wave.” While several New Wave acts — Blondie, Talking Heads, the Cars, and others — had already scored Top 40 and even Top 10 hits, the triumph of “Rock Lobster” is that, unlike most of the other New Wavers, the B-52s sacrificed not a trace of their characteristic weirdness.  “Rock Lobster,” like the band that created it, represented a radical departure from pretty much everything that came before it. Readers of a certain age (*ahem*), if they were lucky enough to live where the single was in radio rotation, will never forget how incredibly goofy and zany the song was when played alongside the era’s more standard pop music. This was not the Bee Gees or the Eagles, and it most certainly was not Linda Ronstadt or Neil Diamond.

Unfortunately, most larger radio markets — particularly those in the South and Midwest — failed to play the song, much less put it in rotation. In retrospect, it’s hard to blame them. Between the downfall of free-form FM radio and the rise of MTV, pop radio became a breeding ground for the safe, the unimaginative, and the tried and true. Even legitimate hit singles — think along the lines of “Brass in Pocket” or “Cruel to be Kind” — met with resistance and found their audience despite programming resistance. Kate Pierson’s cheesy Farfisa organ and Ricky Wilson’s neo-surf guitar, to say nothing of Fred Schneider’s bizarre lead vocal and the, uh, sounds, Pierson and Cindy Wilson made with their throats, were never going to have much of a chance breaking the band in a big way nationally.

Which is not to suggest for a moment that the song and the band were without their adherents. John Lennon, on vacation in the Caribbean, famously heard the track in a disco and immediately noted the confluence of the band’s vocalizations and those that made Yoko Ono a rock and roll pariah a decade earlier. Rolling Stone magazine gave the band a prominent feature late in 1980 that, despite calling them “a tacky little dance band” and dubbing them “wonderfully ridiculous looking,” was generally positive and did an excellent job of relaying the sense of fun that the band cultivated. Lastly, the band made a smoking-gun appearance on Saturday Night Live in which they not only rocked the hell out of the single, but also brought the house down with a version of “Dance This Mess Around” that didn’t stop in time for the commercial break. By the end of 1980, despite missing the top 40 with their debut single, the B-52s were generating a terrific buzz and more than one critic thought of them as being poised for major-league success.

It didn’t quite work out that way, at least not immediately. Their sophomore album, Wild Planet, while still plenty fun and plenty danceable, failed to produce a single that captured even as much radio play, much less more of it, than “Rock Lobster.” In 1985, Ricky Wilson — the band’s most notable instrumentalist by far— died at 32 of AIDS-related complications and the band seemed adrift until the 1989 release of Cosmic Thing, which finally broke the band commercially with two number three hits (“Love Shack” and “Roam”) as well as the Top 30 “Deadbeat Club.” The band finally and permanently broke out of the new wave/dance/weirdo ghettos and became a platinum monster, at least for a little while. Their 1992 follow-up, Good Stuff, contained a Top 30 hit with its title track, but Cindy Wilson’s absence (she felt like she had never properly mourned her brother’s loss) hurt, as did the wholly unexpected transformation of the band’s signature sound into formula. Good Stuff proved the band’s last studio effort until 2008.

Still, though, the B-52s count as legends to this day. They’re considered by both those of us who were there, as well as by the new generation, as being a quintessential “80s band,” and continue on to this day as a successful touring band. That’s quite a journey for a band whose first-ever single recalled nothing so much as a surf-punk Yoko. They are probably rightfully not in the Rock and Roll Hall of Fame, which in no way denies or demeans their very real contribution to the art form.

So, does it matter, in the end, that the single that introduced the B-52s to the world (at least some of the world) missed the Top 40? Not one iota. “Rock Lobster” will always stand as the definitive B-52s song, even after several much bigger hits. That a song written by Fred Schneider about his distaste for crustaceans should remain the band’s most well-known dance anthem and one of the most instantly recognizable tracks of its time speaks volumes about the relative importance of the pop charts, even when they were in their heyday. You will never, ever stop hearing “Rock Lobster” on the radio, which is exactly as it should be.