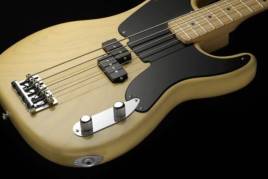 Turn up the bass! That’s a rallying cry I can almost always get behind, being a lover of music that rattles my rib cage and makes me want to move my butt. But how did we get to the point where that was a request that could be honored? For most of human history, with a few exceptions, the only available bass instruments were drums. There are three chief strands that led us to a world of massive and pervasive bass. First, there is the collision of cultures in the Americas and elsewhere due to slavery and colonialism.

I’ve written elsewhere about West African music and its key influence on modern ideas of harmony. But of course that influence goes deeper and wider, most obviously in the elevation of percussion instruments to a central role in an ensemble, rather than just light timekeeping or decorative accents. This shift prompted the development of drum kits incorporating bass drum, snare drum, toms and cymbals, which in turn raised the volume level for early jazz and music hall groups. Tubas were used in groups like Louis Armstrong’s Hot Five to bridge the sonic space between the horns and stringed instruments and the drums.

Upright bass gradually replaced the tuba as the foundation of choice in jazz, and as bands got bigger and bigger, keeping enough low frequencies in the mix became more and more of a challenge. And that’s when the second strand of bassification emerged: electricity.

Specifically, a man named Everett Hull recognized the problem and came up with a clever solution. He built a pickup that replaced the standard peg at the bottom of an upright bass, and plugged into an amplifier. He called it the Ampeg, which gave his company its storied name.

Once this rubicon had been crossed, it was probably inevitable that someone would start thinking about the instrument itself. Seattle musician and inventor Paul Tutmarc made the first electric bass guitars, but only sold about 100, and the product did not take off, despite the later marketing efforts of his son Bud.

The man who brought us the bass guitar as we know it was Leo Fender. It seems almost unfair for one man to have created the Stratocaster, the Telecaster, and the Precision Bass. But he did, and Wes Montgomery’s brother Monk was the first to tour with it, with Lionel Hampton in 1953. Elvis’ bassist Bill Black made the switch in 1957, and for the most part rock and R&B never looked back. Gibson and others began to make their own electric basses, and the market exploded in the 1960s.

Electric basses don’t make noise without amplifiers. Fender and Ampeg both made amps to go with their instruments, but these early efforts were pitiful creatures compared to what came later, hovering around 20 watts of output at best. Over the course of the 1960s, all aspects of bass reproduction were ramped up, including the introduction of large bass speakers in PAs, and much more powerful and elaborate rigs for amplification.

The third crucial step in the triumph of the big boom came from a Cornell PhD student named Robert Moog, and was made possible by the invention of the transistor. Synthesizers, of which Moog’s were the first truly practical and creatively powerful models, have gradually erased many prior limitations and boundaries in music. They did away with any lower limit on pitch except the ability of the ear to process it, and they allowed the creation of tailor made “envelopes” and “filters” to shape the character and dynamic curve of sounds.

Early uses of synthesizers in pop music, such as “Here Comes the Sun” by The Beatles, tended to occupy the higher registers. But gradually, pioneers like Stevie Wonder, the late lamented Bernie Worrell, and many others began to use synthesizers to augment or replace electric bass. By the time the second British Invasion came along in the 80s, songs with strictly synth bass were commonplace.

Since then, engineers and players have extended the power and flexibility of bass sounds in pop music. The use of compression (which results in a more constant volume within a part), among other things, helped give consistency and clarity to the mercurial power of virtual bass instruments, resulting in the overwhelming, club-shaking, in-your-face-and-your-gut tones we first knew in EDM, and which are now standard fare on the pop charts.

So when you hear the cars that go boom, or you’re being carried on a tidal wave of low end in a club, or you’re just cranking up your favorite band in the car… perhaps take a moment to reflect on the hard work and innovation and creativity that made it possible.

0 comments on “All About that Bass!”