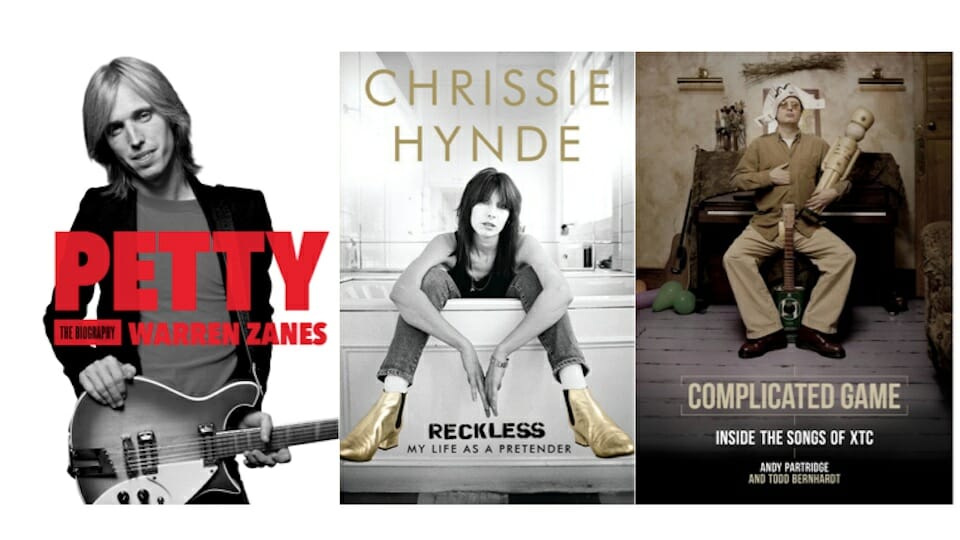 Over the past coupla weeks, we’ve talked about podcasts and music to keep you company on your summer road trips. Today, we’d like to recommend some cool summer books for when you get to where you’re going. Being music geeks, we naturally have a bunch of pop biographies on the list. You can listen here to our weekly radio segment, or read on…

Chrissie Hynde’s Reckless
Songwriters, by nature, are good storytellers — so it’s no surprise that rock legend Chrissie Hynde has delivered a no-holds-barred bio in Reckless: My Life as a Pretender. Back in the ‘70s, she left Ohio for London, where she got by selling handbags on the street, working in a clothing store owned by Malcolm McLaren — who discovered the Sex Pistols — and writing for the famed New Musical Express. Along the way, she nearly married Sex Pistol Sid Vicious, which would have been quite an adventure. Chrissie eventually found her tribe in The Pretenders, a mashup of this restless American and three Brits equally obsessed with music. Their in-your-face pop-rock served them well – even if Chrissie often wrestled with demons like rogue bikers, drugs and even gang rape. As a musician, and now an author, Chrissie is unapologetic and defiant. Just hear what she has to say about current pop stars like Miley Cyrus. For a shot of straight-up badass, you can’t do better than this.

Andy Partridge’s Complicated Game
Speaking of snarky Brits, XTC was one of the great post-punk bands of the 80s. They created cleverly-written, tightly-played tunes that made you want to dance even if the subjects were really dark. XTC gave up touring in 1982, after leader Andy Partridge suffered a nervous breakdown on a Paris stage. After that, the band became a studio group, releasing cult classics like 1986’s Skylarking, produced by Todd Rundgren. There’s good news for fans, though: Partridge has just co-authored a new book, Complicated Game: Inside the Songs of XTC , which reveals the story behind 30 of the band’s best songs, straight from the source. There’s also more than a bit of reflection by Partridge on the struggles for both money and critical respect for this often-overlooked band.

Warren Zanes’ Petty: The Biography
Closer to home, Tom Petty fans will dig Petty: The Biography by Warren Zanes. Zanes has worked with Petty and is a personal friend, so he’s a natural for getting the real story straight from one of music’s biggest names. From Petty’s days growing up in Florida, to his work with Mudcrutch, the Heartbreakers, The Traveling Wilburys and beyond, it’s a truthful, unvarnished glimpse into a complicated rock life.

Now let’s switch gears, or more to the point, horses, to discuss one of the oddest, but coolest, travel books you’ll ever read.

Rinker Buck’s The Oregon Trail
For reasons you’ll have to read for yourself, author Rinker Buck decided to buy some mules, hitch up a covered wagon, and travel the 2,100 rough miles of the original Oregon Trail from Missouri to the Pacific Northwest — Old-School-style. For more than four months back in 2011, Buck and his brother Nick journeyed through farmland, deserts, desolate hill country and steep mountain passes following the still-evident ruts of 19th-century wagon trains, the first men in more than 100 years to complete an authentic covered wagon trek on that trail. [amazon template=right aligned image&asin=1451659172]Chances are good you’ll actually be fascinated with the personalities of individual mules, the mechanics of braking a 6,000 pound covered wagon on a steep downhill slide and the ingenuity it takes to cope with broken wheels, cracked axles and the natural disasters that regularly threaten the trip. Along the way, they re-discovered the pioneer spirit that helped build this country. For a trip back in time, and maybe a dose of hope for our future, The Oregon Trail: A New American Journey should be on your reading list.

Lauren Groff’s Fates and Furies
The last book on our list is for sure a bit “out there,” but long summer days and nights are great for letting your mind wander — and for sometimes thinking Big Thoughts. So, when you’re feeling maybe a little philosophical, take a look at Fates and Furies. [amazon template=left aligned image&asin=1594634475]In Greek mythology, the Furies were female goddesses of vengeance. The three Fates controlled the thread of a person’s life from birth to death. Those old Greeks knew very well how quickly that slender thread could unravel. Before you start thinking this is all too heavy — it’s not. The story of Fates and Furies centers on an apparently perfect couple whose life and passions spin in and out of control over the years. It’s got all the usual entertaining elements: the scheming family, the plot twists, the sexual intrigues. You know, your basic summer page-turner stuff. We look at the story more-or-less from two sides: the husband’s (the Fates) and the wife’s (the Furies). Suffice to say, “nothing is as it seems.” Anyway, Fates and Furies won pretty much every kind of literary award last year. Even President Obama recommends it as his favorite novel of 2015. So if you’re looking for a trashy summer novel that isn’t really trashy, this is the one.