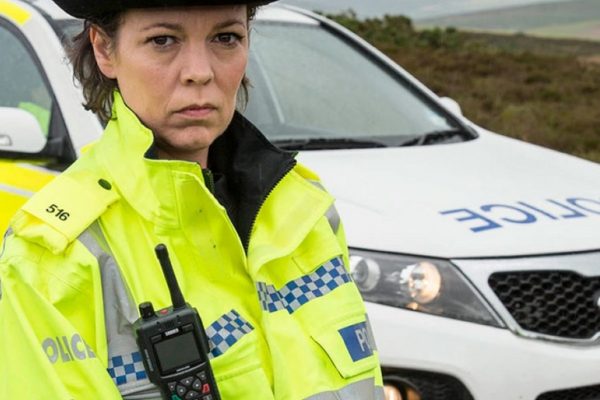 Bye-bye, Miss Marple. You’ve been replaced by a series of brooding, charismatic leading ladies who are confidently redefining the British mystery on TV. Ever since Helen Mirren arrived as the tough-as-nails chief inspector Jane Tennison in the mega-hit Prime Suspect starting in1991, the genre has been expanding, in a nail-biting fashion, as it addresses race wars, global terrorism, and questionable policing methods in marginalized communities. Three recent shows that inspire particularly rabid followings are Happy Valley, Broadchurch, and Marcella. In each instance, the lead detective isn’t just a lady. She’s a smart, no-nonsense, audacious type who’s juggling the demands of children, partners and the entanglements of her own imploding interior world.

Happy Valley: Sgt. Catherine Cawood
Set amid a world of lush greenery and woolen-mill rivers like a meth-head’s Wuthering Heights, this moody thriller features Sarah Lancashire as Sgt. Catherine Cawood, a woman haunted by her teenage daughter’s violent rape and suicide. Obsessed with vengeance at any cost, she becomes a seething mastodon upon learning that someone close to her may be entangled in a new set of violent crimes. Cawood is flawed in a way that Tennison couldn’t possibly be when she first smashed through the glass ceiling. With performances and writing that are equally wrenching, Happy Valley is not for the faint-hearted. At the end of her day, you might be game to meet up with her for some wicked gossip over a Guinness but you’d need a long, hot shower afterward. Although a Season 3 release was announced by BBC1, there are questions about Sarah Lancashire’s return. It would be a crime if she didn’t come back!

Broadchurch: Det. Ellie Miller
Filmed in Dorset (a.k.a England’s “Jurassic Coast”), the fictional seaside village of Broadchurch is shattered by the murder of a local boy. Detective Ellie Miller (Olivia Colman) is close friends with the boy’s family, the Latimers. When big city Detective Inspector Alec Hardy (Doctor Who’s Broadchurch were shot sequentially which contributes to their taut structure and deliberate pacing. Like its gorgeous coastal locale, Broadchurch is at once raw and enchanting. Luckily for us, a third installment is anticipated in 2017.

Marcella: Det. Sgt. Marcella Backland
The newest of the bunch, Marcella is framed by London’s urban conceits, multiculturalism and corporate greed. At the show’s start, Detective Sergeant Marcella Backland — played with a compulsive frenzy by Anna Friel — returns to her police squad after an extended leave. An unsolved serial murder case that she handled eleven years ago has been reactivated. Understandably, she is depressed; more dramatically, she suffers from vexing psychotic episodes that suggest she may have compromised the crime scene. And it gets better from there: Her lawyer husband (Nicholas Pinnock) may be cheating on her; their beautiful interracial children are shunted away to boarding school — to be protected from their mother?! Because Marcella is an unreliable narrator, her story unravels as it unfolds. A second season, featuring many of the same actors, has already been commissioned by ITV for a 2017 airing. This was riveting the first time around; we’re guessing the same will hold true in the future.

0 comments on “What Makes These 3 British Cop Shows So Enthralling? Complex Women Detectives”