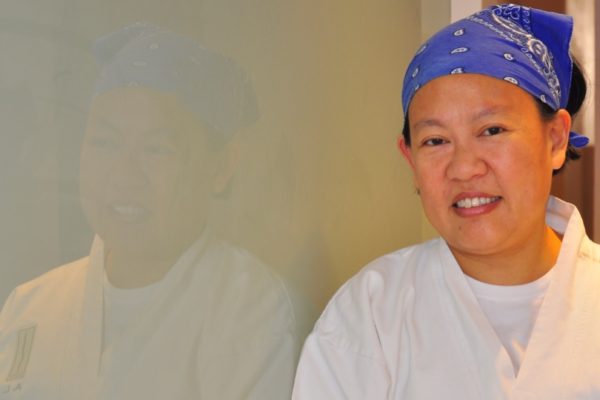 There aren’t too many chefs out there who have soundly beaten Mario Batali on Iron Chef, cooked a state dinner at the White House, been dubbed one of the top 20 chefs by Food & Wine magazine, had a recipe anthologized by a museum, and run their own restaurant in New York City for over 15 years. In fact, there might be only one: Anita Lo (who’s also cooked for David Byrne and Devo, by the way). In this exclusive CultureSonar interview, the author of Cooking Without Borders talks about her time in and out of the kitchen, on and off camera.

Q: Do you listen to music when you cook? If so, which artists are you listening to now when you’re in the kitchen?

A: Yes. We just saw Hamilton so we’ve been listening to that soundtrack a lot. In the kitchen at Annisa we listen to our various cooks’ music on their iPhones through a speaker system.

Q: Your restaurant Annisa has been open for 17 years! What kind of music did you like to play in the restaurant? Did it change much over the years?

A: We’ve always played jazz. Jennifer Scism, my opening partner, loved jazz and had a huge playlist. We’ve never changed it. Wynton Marsalis came in one night and commented on how much he loved the list.

Q: You’ve been on Iron Chef, Top Chef Masters, and Chopped: All Stars. Which show resulted in the most recognition on the street?

A: Top Chef Masters, certainly. It’s a longer show and it keeps rerunning. Oddly, Chopped seems to be more the focus in the South.

Q: You were the first woman chef invited by the White House to cook a State Dinner. What was that like?

A: It was humbling, and awe-inspiring, and perhaps the biggest honor of my career. Everyone at the White House was so warm and hospitable.

Q: If you could prepare a meal for any rock-and-roll band, who would it be and what would you make?

A: I’ve been lucky to be able to cook for some of my rock heroes here at Annisa. I worship the Talking Heads, and David Byrne has been in several times. Also the folks from Devo have been in — I was a huge fan when I was little. I got Gerry Casale to sign my picture LP.

A: I don’t watch a lot of food TV but I’ve always loved Bizarre Foods with Andrew Zimmern. I also like Anthony Bourdain’s shows. Food-as-culture shows interest me.

Q: Your work is currently featured in the “Sour, Sweet, Bitter, Spicy” exhibition at Museum of Chinese in America*. What recipe did you select for the accompanying cookbook and why?

A: I gave them a recipe for Steak Tartare with Bulghur, Cinnamon and Sesame-Tofu Sauce. It was a dish my chef de cuisine and I created for a charity cookbook that was focused on melding two cuisines — ours were Chinese and Lebanese. Annisa is contemporary American so we bring in influences from all over the planet, but I wanted to give them something that had some Chinese influence.

Q: You’re co-hosting a charitable event on April 4th for the No Kid Hungry campaign. What can you tell us about that? How can others get involved?

A: Yes, I am the culinary co-chair along with Bryce Shuman for Share Our Strength’s annual fundraiser, Night Out for No Kid Hungry**. 15 chefs from all over the country will be cooking for two tables of 10 guests each. For tickets, go to nokidhungry.org.

*The “Sour, Sweet, Bitter, Spicy” exhibition at the Museum of Chinese in America has been extended through Sep. 10, 2017. Visit mocanyc.org for more details.

**No Kid Hungry is the name of Share Our Strength’s campaign to end child hunger in the USA by getting needy kids nutritious meals and teaching families healthy cooking on a budget.