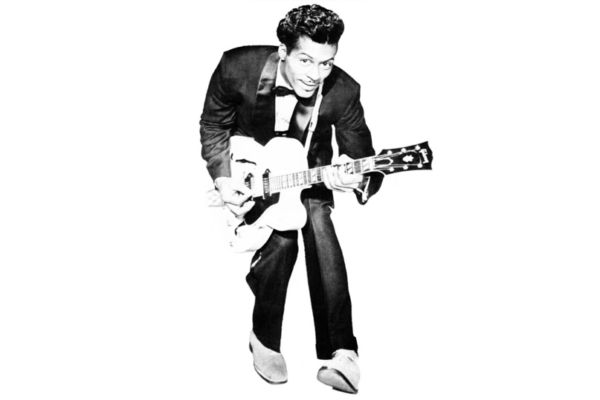 Richards has a point: simply turn to your copy of The Rolling Stones (1964) to hear that influence blaring from the incendiary riffs. The same could be said for George Harrison, who either sang Berry songs (“Roll Over Beethoven,”) or channeled the guitar player on The Beatles’ rollicking compositions (“I Saw Her Standing There”). What swiftly emerges from these records is a great love for a consummate professional, who was wise enough to let his instrument do the talking.

This brings us to the recently-released Live From Blueberry Hill, a compilation of performances recorded between 2004 and 2006. Sure, his voice had cracked, but that was never the point of his work, and more importantly, the guitar licks bellow loudly, and with great gusto. “It’s my show. I gotta pull it outta the gutter,” Berry chuckles, but no one (not even George Harrison) would dare call their hero undeserving of the attention. Happily, the performances stand up, and while they don’t recall the glorious records of the sixties, they don’t sully the legacy either.

“Johnny B. Goode” gets a run-through, enjoying a second life as a heavy metal tentpole, thanks in part to Marty McFly’s searing performance in Back To The Future. Yet it’s “Roll Over Beethoven” that proves worthy of our attention, and Berry’s vocal slyly salutes the buoyancy of The Beatles version. There’s plenty of thunder heard in the bellowing riff to “Let It Rock”, which only grows more ecstatic with every passing chord. And then there’s the jolly whimsy of “Little Queenie,” the throwaway rocker that holds up in the canon of rock choruses. Behind Berry sits pianist Robert Lohr, who offers a series of barrelling piano patterns.

It’s clear from the concert that St.Louis held great memories for the musician, yet he musters equal comfort from the cheers from the audiences, who hoot to the iconic solos and poses. In almost punk-like fashion, he keeps the performances short, sticking to mainstream, radio-like run lengths. The live album revels in this feeling of urgency, making it one of the few live albums that doesn’t feel taxing but offers listeners the chance to dive back into the pool of riffs and rock collages.

At this point, Berry was seventy-odd years old, and he would have been forgiven for taking it easy. But like Paul McCartney, he shows there’s no need to slow down with age. Better still, he sounds like he’s having fun, which he’d long earned at this point of his trajectory, and while some of his fans might favor a more somber set, the guitar player more than deserved the right to rock out as he wished. It’s to his great credit that Berry kept performing until the day he couldn’t, every lick positioned, every vocal delivered with truth.

Berry died at the age of ninety, having outlived disciples Harrison, John Lennon, and Brian Jones. In many ways, his death closed an era in rock. He was one of the last of its founding members, and if there is a Mount Rushmore for rock players, his face should certainly be up there, alongside Elvis Presley, Buddy Holly, and  Fats Domino. A high bar, sure, but it’s one Keith Richards would definitely argue for.