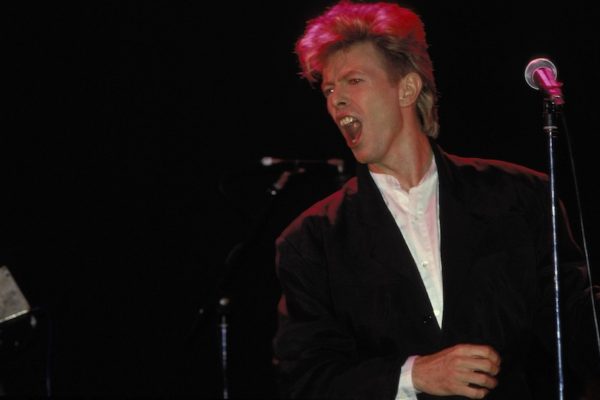 The massive success of his 1983 album Let’s Dance and the accompanying Serious Moonlight Tour transformed David Bowie into an international superstar. Coming after more than a decade as a cult-hero who sometimes had big hits, the transition presented Bowie with commercial pressures he’d largely avoided prior to that point. In particular, this meant pressure from his record company for an immediate follow-up. Despite his reservations and a lack of new material due to an inability to write while on tour, the singer returned to the studio in April of 1984, leading to the September 1984 release of Tonight.

Strictly by the numbers – over a million copies sold and the top-ten chart performance of the single “Blue Jean” – Tonight would be one of Bowie’s most successful releases. However, even in the wake of Let’s Dance, sales were not his key criteria. Despite winning a Grammy Award for the video “Jazzin’ for Blue Jean,” he later described the album as “a desperate mistake.” Fans and critics alike largely shared this assessment, a consensus reflected by Tonight’s regular appearances near the bottom of lists ranking his albums. Whether Tonight actually deserves this unfortunate distinction is a separate matter.

Considered solely as a follow-up to Let’s Dance – a record that expertly balanced Bowie’s commercial and artistic impulses – Tonight can’t help but feel somewhat disappointing. The songs aren’t as catchy, the playing and production lacks its predecessor’s sparkle and the less said about the singer’s rendition of the Beach Boys’ “God Only Knows” the better. Still, it’s hard to shake the sense that audience reaction had nearly as much to do with their expectations as the record’s actual content. Tonight may not be a classic David Bowie album, but it nonetheless shares one defining trait with his other work. Not only does the record not sound like the rest of the pop music of its time, it doesn’t sound much like his other albums either.

The majestic opener, “Loving the Alien”, could hardly sound more different than “Modern Love, or the lead-off tracks from the albums before or after and remains an undeniable gem. Two decades later, Bowie performed a radically reworked version of the song on his final tour, suggesting in his introduction that this remarkably spare rendition might be “the way it should always have been done.” Combined with his late-80s comments about how much better his demo version was, that 2003 assessment says more about the blind spots great artists often have about the quality of their work than the quality of the version released on Tonight.

“Don’t Look Down,” the album’s next song, is rather more low key but ties to an element that dominates the album. Recorded by Iggy Pop for his 1979 album New Values, it’s one of five songs on Tonight co-written and/or performed with the punk icon. The affecting title song (sung here with Tina Turner) and “Neighborhood Threat” both date back to the duo’s 1977 collaboration Lust For Life, while the others were newly written and recorded for Tonight. Collectively they make the album a unique snapshot of one of Bowie’s most significant musical relationships.

Bowie sometimes referred to his mid-80s work as his “Phil Collins years”, a period where he had the attention of a fan-base whose tastes he didn’t necessarily understand and they reciprocated the feeling. This is one of the many factors that make Tonight somewhat tentative in a way few of his records ever felt. However, tentative is not the same as worthless. Many artists would make Faustian pacts to have a “desperate mistake” this richly rewarding.