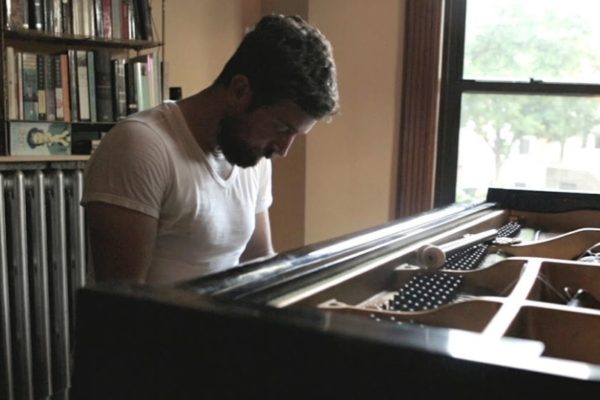 Most people are familiar with film composers Danny Elfman, John Williams, and Hans Zimmer. If they’re film geeks to boot, they know about Ennio Morricone and Bernard Hermann, too. And everyone knows Quincy Jones. But what about the next generation of film composers? Those whose credits on IMDb are restricted to the 21st century? What new names might we add to the pantheon? One candidate is definitely David Cieri, a composer who not only scored major television events by Ken Burns but has also been the subject of a short documentary himself by The Ewers brothers: Unstuck. Clearly, this guy is resonating with the times. What’s going on in his head when he’s soundtracking zeitgeists for screens big and small? Well, we asked him.

Q: You’ve worked with Ken Burns a few times before: Baseball, Prohibition, The Roosevelts… but The Vietnam War docu-series is probably the longest. How did the show’s epic length impact your role?

A: The Vietnam War project did require a different approach on my part, in that I had to get specific and clear about what kind of room I would be playing in. In other words, what would be the music that surrounded my compositions? Although this is true of any film with source music, in this case, the music that was sourced — Zeppelin, The Beatles, etc. — is so alive in the collective consciousness, that I had to think about ways to effectively differentiate myself (while still remaining part of the family) from these rock and roll and country monoliths that seem emblazoned onto our thoughts and feelings about the era. In addition, the quantity of this wonderful music from the era is quite enormous — as you mentioned length — so trying to find creative ways to navigate this amount of rock from the ‘60s and ‘70s in a relatively short amount of time was an interesting and welcome challenge. How to not be redundant in my sounds while I stitched my compositions into this abundantly familiar music… how to go where this music wasn’t already occupying aural space and still be of the same thread.

Q: You were in college at the University of Colorado/Boulder when Timothy McVeigh bombed a federal building in 1995. Did any personal memories come into play when you were scoring the Emmy-nominated doc Oklahoma City?

A: We are such an image obsessed and visually-laden culture, and it seems that this started to gain unprecedented momentum right around these years when the internet crashed the party in the ‘90s. It will take us maybe 50 years from now to be able to look back and see whether this unanticipated guest is really contributing to our humanity — but at that time I did have, of course, a very deep-seated and visceral reaction to the eviscerated face of the Federal Building in Oklahoma City. So when I confronted the images again as I started to score the film, those anchored roots became exposed and raw again. You can hear this vulnerability and fear in the music written for the film — fear of course in having to deal with the menace that McVeigh was, but fear also in the idea that, as Ernest Becker reports in his The Denial of Death, if we cannot create like gods, we will destroy like gods. Those angels and those devils are in the music as well, and I surely felt them during this time in 1995.

Q: You’ve composed for over 50 film/television projects over the last ten years yet you still have found time to put out a jazz album in 2017. How did you manage that? Is jazz your escape from the serious nature of many of the projects with which you’re affiliated?

A: I have great amounts of energy for the things that give my life meaning and music in all of its forms and manifestations is at the center of this meaning so the time it takes to do things never feels like it’s not enough. Time to do what you love makes 48 hours in one day. Also, the records and the film music are all of a piece. None of it is a game, yet all of it is very fun — serious/fun I suppose. Jazz, or improvised playing, is never an escape for me as it is a music designed to deal with problems by going toward them rather than moving away from them. That’s what gives the music its burrs, its edge, its beautifully unsettled and painful feeling. In all of the music I make, there are things in the way and sometimes I put things in the way, and that raises questions, and it’s in the confrontation with these questions that the music emerges. What I like to do to escape is watch Game of Thrones.

Q: You also had a concert at Carnegie Hall this year. Does your mind approach orchestration differently when you’re considering whether the music’s final destination is the concert hall versus the movie screen?

A: The concert hall is a forum in which I can go wide and take up great amounts of space with what I feel like I have to say musically because I can carve the silence in the room any which way. With film music, there are things that the music that I make has to dance with — dialogue, images, and sound effects. So while music being made at Carnegie Hall can take up as much space as it needs, music for film inherently has to have a hole in the middle of it for the other elements to co-exist, and if I’m doing my job right, co-exist with a better quality of life. Mark Twain said that the difference between the right word and the almost right word is the difference between lightning and a lightning bug. If I am writing for film effectively, I am writing in a way that makes 1+1=3, by making all of the considered elements combust more effectively.

Q: Your output as a film composer has been almost entirely documentaries and shorts. Is there a short with which you’re affiliated that you feel like deserves a larger audience?

A: There is a short I just completed with Tony Gerber and Lynn Nottage as part of her recent event titled This is Reading, which is about the town of Reading, PA. This is a short that I hope finds a wide audience as it feels so incredibly important right now.

Q: Who is your favorite living film composer?

A: Johnny Greenwood. He lives and understands the prickly sides of being alive and in no way is eager to make friends with his sounds. His music is free to be — take it or leave it, and as a result my imagination is drawn in because I can hear that I am getting the unfiltered and uninhibited ideas and sounds — wide-ranging perceptiveness and honesty has a certain ring all its own. He brings more of a 20th century “modern classical” (ouch — I loathe this label but it’s useful to some degree) approach to the music which is a side of the vocabulary I hear very few composers bringing to their film scores, so the music has great shards in it which graciously needle my ears every time.

A: Carl Theodor Dreyer’s Joan of Arc. The film is a masterpiece of visual quiet and inner meditation. Renee Jeane Falconetti (Joan of Arc) leaves scars she is so good. It would be an incredible challenge because the film works very well already without any music at all, which just may end up being the most excellent scoring work done yet. In an age where film music, by and large, is trying to bash our ears in with its “more is more” assaults, the incandescent quietude in this film from 1928 far outdoes the seemingly powerful sounds coming from so many mainstream movies today.