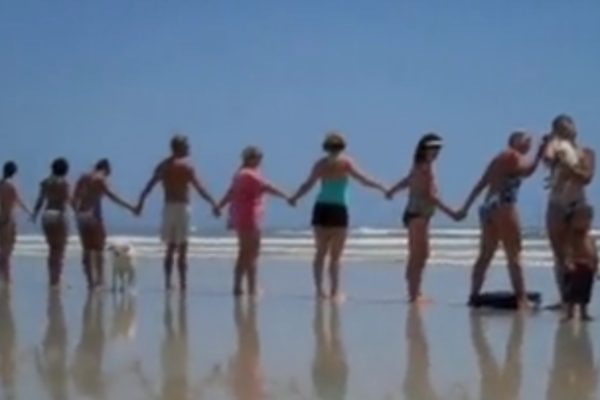 David Gaz‘s documentary Kindness Is Contagious was inspired by a scientific study by that discovered that “if you do one good deed, they do a good deed for four other people and so on and so on.” Now more than ever, that seems an important phenomenon to remember (and put into practice). With heartwarming stories from athletes, artists, police officers, and soup kitchen volunteers, Gaz’s film is a welcome reminder of the importance of generosity in our quests for meaningful lives. (There’s also evidence to support the notion that it’s better for health and longevity as well.) Check out our interview with the director below then watch the film here.

[amazon template=right aligned image&asin=B014BIB3TI]Q: The documentary is narrated by novelist-screenwriter Catherine Ryan Hyde (Pay It Forward) who certainly shares your credo. How did she become involved?

A: Catherine became involved later in the production after we started to have some clout in the kindness community. Once we had many notable interviews under our belt, it became much easier to contact people. Also, my producer, Sara Glaser, has that rare quality of relentless perseverance, and exceptional charm so she managed to get pretty much anyone I wanted to interview excited about the film. Then, once I had interviewed Catherine, I was captivated by the power of her voice and asked her if she would narrate it. That was the icing on the cake. I can’t imagine a better narrator.

Q: How did the making of this film affect your approach to your own career outside of filmmaking? Has it affected your work in advertising and photography?

A: It has affected my work and my career profoundly. Shortly after making the film, I left my day job as a partner in a digital ad agency with Fortune 500 and Big Brand clients to found an agency (called the Bureau of Small Projects) that repurposes all the tricks we used to make these companies rich, to help non-profits and small meaningful businesses make a lot of money and get a lot of donations. On a more selfish side, the film also brought in a lot of new clients which, having an affinity to the film’s message, are some of the nicest and most interesting people I have ever met. Now rather than being surrounded by aggressive MBAs with a chip on their shoulder, I’m surrounded by highly successful entrepreneurs who are changing the world. And let me tell you there isn’t a better crowd to be part of.

Q: Your previous documentary I Sold My Soul to Satan concerns real-life occult practitioners. Was Kindness Is Contagious a reaction to having made that earlier film? What is the relationship between the two movies?

Q: Ralph Waldo Emerson once wrote “You cannot do a kindness too soon, for you never know how soon it will be too late.” Can you share any anecdotes regarding how a shift towards kindness — inspired by your film — directly and quickly impacted someone’s life?

A: Well one of the nicest ones came from a woman who organized a screening of the film. She was working for a non-profit called Charter For Compassion in Florida. She got the executive director of Charter For Compassion to host a screening because one of the residents told her that their community was one of the meanest places they had ever lived. Then shortly after the screening, she told me that she had been offered a job as executive director of another non-profit.

Q: Do you have a favorite quote about kindness yourself?

A: I like this one by Dr. David Rand. “Nice and generous people are more successful than mean and selfish people because of the principal of reciprocity, basically what you put out in the world comes back to you.”

PS. You may also be interested in our posts Do You Have To Be An Asshole To Succeed?, What Does It Take to Be Happy?, and Rewire Me: Happiness and Wellness Online.