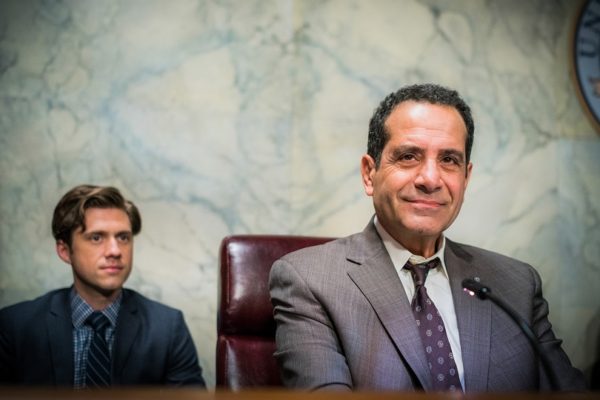 As America struggles to recover from a presidential election filled with rancor, distrust, confusion and angst, you may ask yourself, “why can’t we all just get along”? One simple explanation may be that space bugs are eating our brains. CBS’s satirical horror-comedy, BrainDead, is the brainchild of Michelle and Robert King, superstar creators of The Good Wife. The show traces the arrival of flesh-eating insects from outer space and their path to making a permanent home inside the human head. Gross, you may say? Sounds awful? Yes, to both, but with witty writing and a top-notch cast, it works. Frankly, we’re actually furious that it hasn’t been picked up for a second season.

But back to those bugs. They were delivered to earth in a massive meteor housed at the Smithsonian. They spawn in cherry blossoms so, naturally, their host organisms are largely politicians. Those infected become political zombies whose partisan leanings are magnified to the point of antagonistic polarization. Very few people know about this because the parasites are clever. They have no political agenda; they are party neutral. But they’re ultimately a mixed blessing as their only goal is to keep everyone fighting to distract them from the fact that their brains are disappearing to make room for the 6-legged squatters. With that premise, it goes without saying that hilarity ensues.

BrainDead has a great ensemble cast led by the delightful Tony Shalhoub as Senator Red Wheatus (R), a conniving politician and leader of the pestilence pack and Danny Pino (Cold Case, Law & Order SVU) as his bug-free nemesis, Senator Luke Healy (D). The star of the show is the sparkling, Natalie Wood doppelganger, Mary Elizabeth Winstead (Fargo), Luke’s sister/congressional aide, who leads a small, covert band of misfits in the fight against the insect invasion. BrainDead is fun and funny with a charmingly clever musical recap opening each episode. Sure it’s left CBS, but you can stream it on Amazon. Consider it a miniseries (as it wraps up fairly nicely by the finale).

On a more high-minded note, ABC’s ambitious new drama series, Designated Survivor, stands above the fray with an unmistakable nod to both House of Cards and Homeland. The show stars Kiefer Sutherland as the understated Tom Kirkman, an idealistic Secretary of HUD who sits out the State of the Union address as the “designated survivor” from the president’s cabinet. In a surreal sequence of events, he assumes the presidency after a catastrophic terrorist attack on the Capitol during the President’s speech to Congress kills everyone else in the line of succession.

In these turbulent times, the fantasy of a decent, unassuming accidental president’s earnest attempts to unite the country and do the right thing is a panacea. The fact that there is only one remaining member of Congress, the other designated survivor, is the cherry on top. A political thriller filled with conspiratorial intrigue, Designated Survivor has the makings of a blockbuster.

0 comments on “What’s Eating Washington? “Braindead” Had a Theory…But “Designated Survivor” Has Ideals”