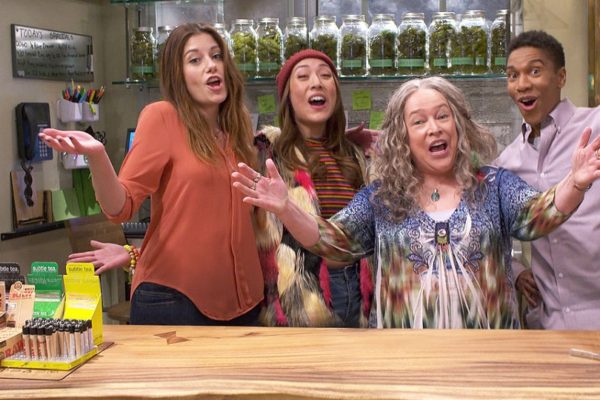 As a child of the ‘70s and ‘80s, I’m a bit of a sitcom snob. I was raised on shows like All in the Family, Good Times, Taxi, Happy Days, and Diff’rent Strokes. These were shows driven by masterful ensemble casts, and characters with rich — and plausible — backstories. Actors waited out laughs from the studio audience, creating the real-time tension of a live theater experience. And storylines might suddenly turn dark and dramatic as characters you loved could die in a car crash, be kidnapped, or pursued by a killer shark during a water skiing competition (points for identifying in which of the aforementioned shows each of these events took place).

Netflix’s great new comedy Disjointed is the first sitcom I’ve seen in ages to even approach the imagination, style, and courage of the shows I grew up with. But it doesn’t simply hark back to sitcoms of the past; Disjointed pushes the envelope with its storylines, character development, and even the sitcom format itself to create a show that is positively date-stamped for today, right now.

The show centers around Ruth Whitefeather Feldman (Kathy Bates), a 60-something “cannabis activist” who runs a weed dispensary — called Ruth’s Alternative Caring — with her MBA-holding, biracial son Travis (Aaron Moten). The shop is staffed by three “budtenders”: grower Pete (Dougie Baldwin) who talks to his pot plants; Jenny, the self-described “tokin’ Asian” (Elizabeth Ho) who has dropped out of med school unbeknownst to her mother; and Olivia (Elizabeth Alderfer), whose ambivalence about weed stems from the meth epidemic ruining her hometown. Security guard Carter (Tone Bell) is an Iraq war vet, whose PTSD symptoms lead his co-workers to offer up some herbal assistance. Comic relief comes in the form of a nutty stoner couple named Dank and Dabby (Chris Redd and Betsy Sodaro, respectively) who host their own pot-themed YouTube channel.

Much has been made about Disjointed’s marijuana-themed premise, and weed jokes do abound here. But make no mistake: Disjointed succeeds on the strength of rock-solid comedy writing and performances, with or without the pot jokes. For Ruth, pot is not just an escape or indulgence. She has made this lifestyle choice because she believes in the natural healing properties of cannabis, and Bates’ sympathetic performance shows us that Ruth’s motives are sincere. The other characters all have varying degrees of commitment to “the cause,” but their shared desire to make sense of their lives in a rapidly-changing world is palpable.

It’s too easy to call the show “edgy,” although it’s never self-consciously so. Yes, there’s a healthy dose of “Hey, we’re on Netflix” profanity and there’s plenty of drug humor, but topics like racism, PTSD, the legal system, parenting, and addiction are also tackled with the perfect balance of humor and gravitas. It’s clear which “side” the show’s creators and writers are generally on, but any attempts at social commentary and/or debate are subtle, and never heavy-handed.

The real fun starts when Disjointed tinkers with the sitcom format itself. Episodes are broken up with fake “commercials” for pot and pot-related products. Carter’s PTSD is evoked with trippy and imaginative animation sequences which tell his story better than any expositional monologue ever could. (Viewers may also find these sequences enhanced by their own favorite herbal products…so I hear.) There are ten episodes of Disjointed currently available on Netflix, and without giving anything away the story unfolds in ways that you wouldn’t expect. One hopes for at least ten more episodes for the show to truly find its footing; Disjointed is not perfect, but for sitcom snobs like myself, it’s a breath of fresh air!

2 comments on ““Disjointed”: A New High in Sitcoms”