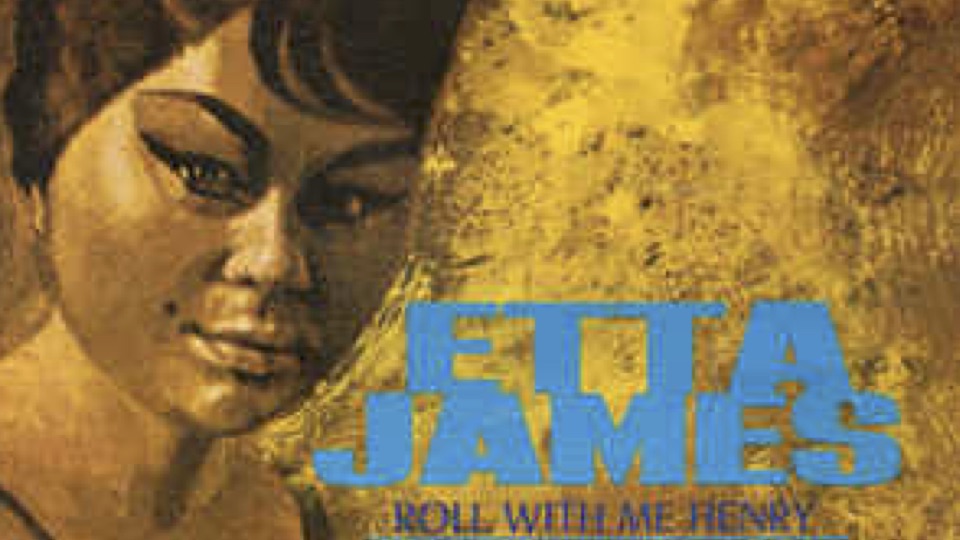 It started as an “answer record,” but transformed into an anthem of sexuality and female empowerment. Etta James’ 1955 hit “The Wallflower (Roll with Me Henry)” contributed to the creation of rock and roll with its taboo-busting lyrics and James’ robust vocals. In addition, “The Wallflower” combines elements of gospel and blues that formulated the early rock sound.

In 1954, early rock pioneer Hank Ballard wrote and recorded the track “Work with Me, Annie,” his take on another bawdy record: “Sixty Minute Man” by the Dominoes. Featuring explicit lyrics for its time (“Annie, please don’t cheat / Give me all my meat”), “Work with Me Annie” was initially rejected by the FCC. Its massive success on the R&B charts and crossover appeal to white audiences resulted in the organization lifting the ban on the song. Meanwhile, a 17-year-old singer named Etta James penned a response tune: “Roll with Me Henry,” a track matching Ballard’s original in frank sexuality. Famed bandleader Johnny Otis heard James perform the track with her then-group the Creolettes; impressed, he signed the act to Modern Records.

Now credited to songwriters James, Otis, and Ballard, “Roll with Me Henry” became the subtitle, with “The Wallflower” serving as the primary title. James’ backing vocalists were redubbed “Peaches,” and it featured an uncredited Richard Berry, composer and singer of the original “Louie Louie.” While playing a subsidiary role to James, he portrayed the titular Henry and served as a foil for James’ brash voice. To avoid the FCC’s wrath, the song was retitled “The Wallflower” in order to initially disguise its true meaning (although the words never appear in the lyrics).

In the cold open, Berry begs the narrator: “Hey baby, what do I have to do / To make you love me too.” Instead of the man being in charge, here the woman sets the rules: “you’ve got to roll with me Henry,” James commands, engaging in call and response with Berry. As the lyrics progress, James further asserts her sensuality and sexual confidence: “You better stop your stallin’ / It’s intermission in a minute / So you better get with it.” Traveling to the bridge, it’s evident James remains unimpressed with her would-be lover, complaining that “you ain’t movin’ me.” The final verse apparently refers to dancing, but when James bellows “If you want romancin’ / You better learn some dancin,’” she implies that if he can move on the dance floor, he may prove talented in bed.

The Peaches not only provide additional vocals but also act as supporters for the narrator. They harmonize on the bridge and provide an “uh-ooh” backing during the chorus, underscoring the narrator’s desire and tacitly approving her assertiveness. The band contributes a relatively straightforward accompaniment, with a lusty saxophone solo emphasizing the bawdy theme. During the introduction, however, the band follows the traditional blues format of punctuating sentences with short blasts of music. For example, after the narrator sings “hey baby” a cappella, the band blares out one note; the narrator sings the next line, followed by another blast.

Similar to Big Mama Thornton’s original version of “Hound Dog,” James’ sexy vocals and her unapologetic frankness prevented the record from pop radio airplay. Sensing the song’s crossover hit potential, pop vocalist Georgia Gibbs covered the track, rechristening it “Dance with Me Henry.” The 1955 single featured revised lyrics underplaying its original sexual context. Gibbs asks the man to “dance,” “rock,” and “talk to” her, adding that “you better dance while the music goes on” rather than “you better roll it while the rollin’ is on.” This sanitized version became an even bigger hit, reaching number one on the Billboard Hot 100. Interestingly James would cover this version herself, releasing her uptempo take in 1958.

Despite Gibbs’ bigger success with the record, James’ “The Wallflower” is now considered an essential recording in music history. James was one of the earliest artists to bridge the gap between blues and rock, her strident voice easily accommodating both genres. The call-and-response sections reveal the gospel roots of blues, R&B, and rock. In addition, forthright sexuality would become a rock and roll hallmark (further reflected in the music genre’s name). James became a feminist figure, her confident delivery and versatility inspiring artists from Tina Turner to Beyoncé. It even found renewed interest in 1985, when the track was included on the Back to the Future soundtrack. “The Wallflower (Roll with Me Henry)” was inducted into the Grammy Hall of Fame in 2008; indeed, its pioneering subject matter and synthesis of several genres stands as a building block for rock history.

Image from sleeve for Etta James’ “Roll With Me Henry”

0 comments on “Etta James and “Roll With Me Henry””