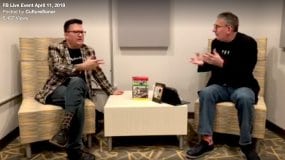 When it comes to Beatle experts, you won’t find people more schooled on all things Fab Four than Ken Womack and Scott Freiman. Ken has a shelf full of books to his credit: Maximum Volume: The Life of Beatles Producer George Martin, The Beatles, Sgt. Pepper, and the Summer of Love, and The Beatles Encyclopedia: Everything Fab Four to name a few.

For his part, Scott not only taught a Beatles course at Yale; he’s also the mastermind behind CultureSonar’s Deconstructing The Beatles documentary series which currently covers Revolver, Rubber Soul, Sgt. Pepper’s Lonely Hearts Club Band, and The White Album (and there are more in the works).

Because we too love the Beatles, we brought these two together for our very first Facebook Live Video. The topic? Producer and “fifth Beatle” George Martin whose contributions to the group’s artistry were absolutely vital. If you missed the live conversation, you can watch it now.