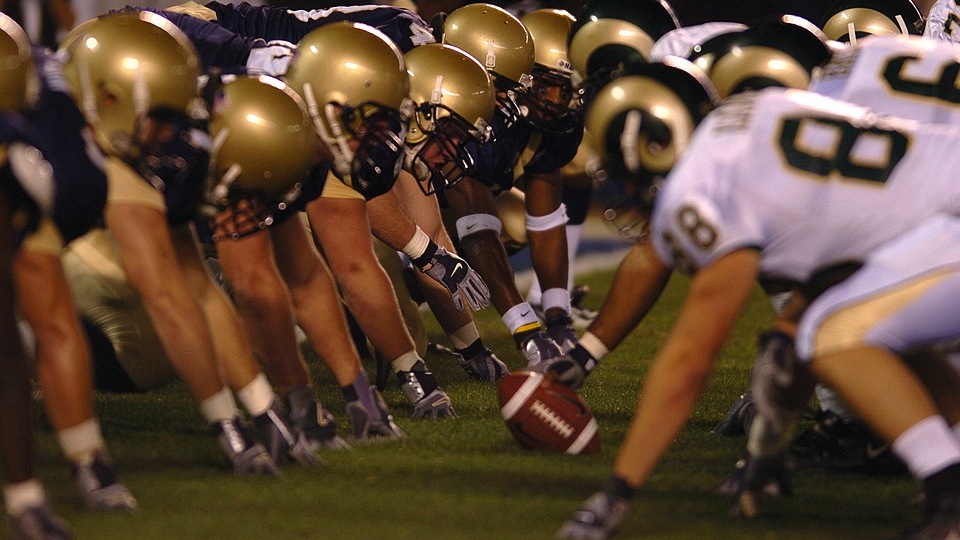 Some things you just can’t avoid. You never thought you’d care, and yet, once you do, you’re never quite the same. That is Fantasy Football. It crept along for years. Quiet. On the fringes. A pastime reserved for uber-fans or sports-nerds with too much free time on their hands. Then it got a little more popular. That guy in my office played. And my uncle — who I considered pretty normal — was in two leagues. Next thing I knew, players were sprouting up like mushrooms in a swamp, like interceptions from Ryan Fitzpatrick. Sheila from HR knew who Terrelle Pryor was and she’s never even been to Cleveland. Finally, inevitably, the gravitational pull of this cultural phenomenon became too much. It was everywhere. I caved. And now it’s your turn. You need SOME way to connect with your fellow humans so here’s your one-way ticket to the Pit Of Despair. I was you four seasons ago, and I am here from the future to warn you of the five stages of Fantasy Football Grief. They’re as ubiquitous and infuriating as a Belichick-Gronk injury update. They are inescapable. So buckle up. Because this is who you are now.

Call it blissful ignorance. It’s pre-season. Anything is possible. Pick a fun name — something with a good, vaguely sexual pun. (The Eifert Towers?) Listen to a few podcasts to prepare. Because this year, you’re going to get ahead of it. This year the glory is yours for the taking. Nothing is newer and shinier than that sweet, sweet feeling of drafting your team. You have plans. You have lists. You have stats. Nothing and no one is going to stand in your way! Look out kiddos! There’s a new Fantasy Sheriff in town and they’re NOTHING like last year.

Maybe it’s post-draft. Maybe it’s Week 3. But things aren’t exactly going according to plan. Because someone (Patrick) keeps poaching your draft picks. Every fantasy football “expert” is a cheat and a charlatan. Also, HOW ‘BOUT YOU TRY COACHING EVERY ONCE IN AWHILE JEFF FISHER TODD GURLEY NEEDS TO GET FREE HE’S NOT A MAGICIAN THEY’RE JUST STACKING THE BOX ALL DAY!!! So you double-down. You fury-read articles and you listen to more podcasts. MOAR opinions! You take the game by brute force. “I will learn everything about fantasy football and it will KNEEL before me!” you scream into the void.

Life is fine. You’re sitting outside the playoff hunt with a 4-4 record. Anything can happen. Chill. Manage your time. You just have to set your lineup during this meeting. You just need one of those late-round fliers or waiver-wire wildcards to pan out into a second-half of season beast-mode game changer. Surely one of them will. Surely your effort has to mean something. It can’t all be blind luck. Patrick can’t coast on Antonio forever. You’ve just gotta pick yourself up, start your studs, and don’t get cute. Rely on those guys that have been consistent. You promise, promise, yourself you will trust the stats and stop benching Michael Crabtree for Brandon Marshall. The season is young! You can do this. The pendulum swings both ways!

WHAT IS THE POINT OF A SPORT WHERE EVERYONE GETS HURT ALL THE TIME?! Why even show up? How is this game even still a THING? Who calls a pass to an offensive lineman when Spencer Ware has been LIGHTING UP THE DEFENSE all game? Why would you do that? WHY? If that’s how it’s gonna be, there’s no point in trying anymore. Nothing you do makes any difference and the world is a dark and roiling mass of unknowable mysteries and you might as well just trade away Jordy Nelson for Brandon LaFell because nothing matters. Plus, it will make Patrick mad.

Hey, this was all supposed to be in good fun. You’ve gotta accept the good games and the bad ones. Make your peace with the proliferating injuries and missed 20-yard field goals. You didn’t start playing to win a bunch of money…Did you? REALLY?! I thought you just wanted to have something to distract you from the real world. A way to connect with your friends. Sure, they could have been a little more active when you sent trade proposals, and you’re a little tired of always being the one to start the fun smack-talk and the jokes. But you love beating your friends, and they are fun even when they’re torturing you. Hell, even your mom started playing and she loves her “little team of losers” that she named “The Puffy Bums” for absolutely no reason. Fantasy made it interesting, and you watched and enjoyed more football than ever. Plus, next year, you’re gonna have all this experience to draw on. You’ll prepare, and you won’t make the same mistakes again. Next year is going to be different!