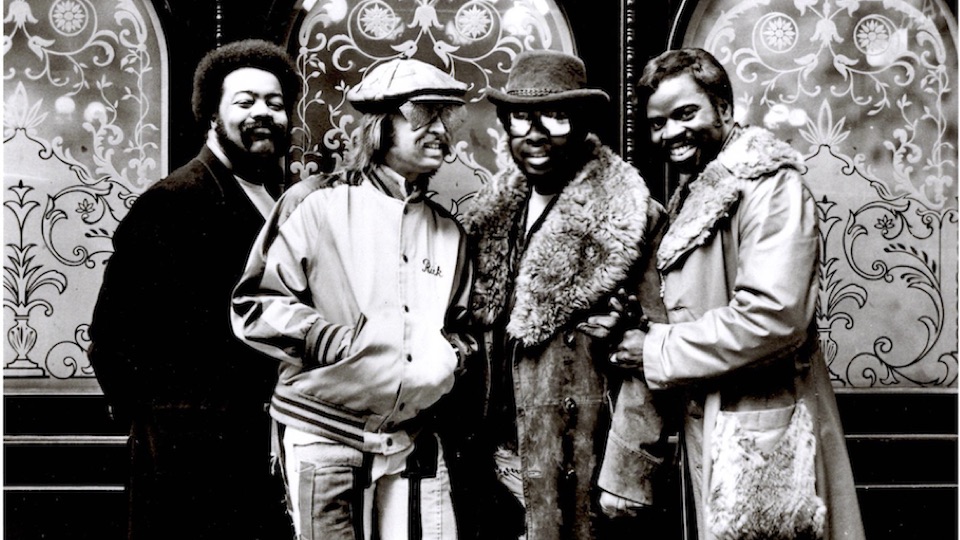 Fresh off directing the historic “Rumble in the Jungle” boxing match and concert between Muhammad Ali and George Foreman, Fred Wesley, musical director for the Godfather of Soul, Mr. James Brown, hides out at the Americana Hotel in NYC.  Mr. Brown and the other members of his band, the JB’s, are completely uninformed of Wesley’s whereabouts. Fred Wesley needed it to be that way. He had reached the end of his rope in terms of his association with Mr. Brown. He could no longer tolerate the Godfather’s dictatorial attitude. At the exact moment Fred thought he had secured absolute solitude, he hears a knock on the door. Looking through the peephole, he sees what he later described as “creatures from outer space.” He would later realize that he wasn’t that far off.

The one person he recognized was former JB’s bassist Bootsy Collins. Upon opening the door, in walk Bootsy, George Clinton, guitarist Garry Shider, keyboardist Bernie Worrell, and bassist Cordell Boogie Mosson. All members of the seminal Funk collective known as Parliament-Funkadelic. After exchanging pleasantries, George breaks out numerous cassettes. They stick one of those cassettes in a tape player that Fred happens to have in the room. The sound emanating from that tape tells a story all its own. Rhythmic instrumental tracks communicating a bold, aggressive, overwhelming groove that immediately got Fred’s attention.

A Blow For Me features a slick back remake of the 1974 Parliament hit Up For The Down Stroke, defined by horn arrangements even more outrageous than the original version. Vocalists Lynn Mabry, Dawn Silva, and Taka Boom serenade the stroke into inner and outer space.

Related: “On the Verge of the Down Stroke”

The true crown jewel of this project is the instrumental Four Play. Anchored by the rock steady bass of Bootsy Collins (the sole bassist on the entire album) and the unassuming rhythm guitar work of P-Funk’s Glenn Goins, Four Play was intended to be released as a single and was featured as the B-side to promo copies of Up For The Down Stroke. Unfortunately, it was withdrawn due to complaints from radio programmers due to its suggestive title.

We Came To Funk Ya opens the album and stands as the most impressive track. Written solely by Bootsy, the jam features minimal lyrics which gives way to sublime solos from both Fred and Maceo. The Brides of Funkenstein and newly recruited singer Jessica Cleaves (formerly from the Friends of Distinction and Earth, Wind, and Fire) lend exquisite vocal support.

Strangely enough, no singles were ever released from this album until 2004 when We Came To Funk Ya appeared in 12” format backed by the full-length version of Four Play.