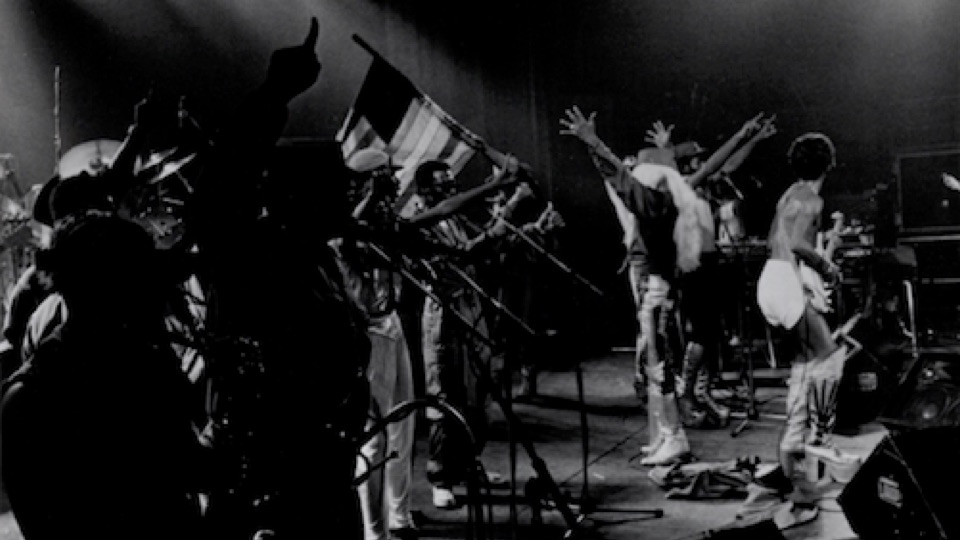 From 1969 to 1976, Funkadelic released a series of groundbreaking albums that expanded the definitions of what Funk-Rock could achieve. Over the span of 8 albums, the U.S. Funk Mob explored an alternative musical universe characterized by lone guitar explorations, blistering yet danceable acid-Rock jams, and X-rated nursery rhymes.

While the band faced little to no restrictions from their label, Westbound Records, they also received little to no promotion. None of the albums produced for the label attained either gold or platinum status.

In 1974, Funkadelic’s alter ego, Parliament, secured a distribution deal with Casablanca Records, led by music visionary Neil Bogart. In less than two years, Parliament would become one of the label’s biggest successes, scoring platinum with the 1975 release Mothership Connection. In an effort to spread the wealth, group leader George Clinton took Funkadelic away from Westbound and signed the band to Warner Bros. Records in 1976. Funkadelic’s presence on the label would prove to be highly successful and also highly tumultuous. The band released four albums for the label, but they would go on to become their biggest successes while generating their own brand of corporate controversy.

Funkadelic’s debut release for the WB coincides with the official start of the Mothership Connection/P-Funk Earth Tour. Hardcore Jollies is “Dedicated to the Guitar Players of the World”, and in that way, the album doesn’t disappoint. “Comin’ Round The Mountain” features searing axe molestation courtesy of original Funkadelic guitarist Eddie Hazel, as well as a ferocious backbeat by guest drummer Buddy Miles of the Band Of Gypsys. Hardcore Jollies also features a live version of “Cosmic Slop,” recorded at Stewart’s Airfield in Newburgh, NY (the same rehearsal space used by the Rolling Stones).

ONE NATION UNDER A GROOVE

Originally titled Throbbasonic Attack, One Nation Under A Groove would prove to be their biggest success. The title track, released a month before the album, spent six weeks at number one on the Billboard Soul singles charts. The longest of any number one single released in that year. The album’s musical identity can be credited to one pivotal figure: Walter “Junie” Morrison, formerly of the Ohio Players (who were also signed to Westbound). He co-writes almost every track on the album. Unfortunately, tensions emerged when WB balked at covering the cost of the extra 45 included with the One Nation album, resulting in Clinton coming out of his own pocket to pay for the inclusion of the 45. It cost Clinton $1.75 per album sold. One Nation sold over a million copies.

Tensions remained between Funkadelic and Warner Bros. while their third album for the label, Uncle Jam Wants You! was released. The company’s indifference with the band’s album art (drawn with wicked and warped passion by P-Funk illustrator Pedro Bell) came to a head when it decided that Uncle Jam would instead feature a photo of thrill sergeant Dr. Funkenstein in Huey Newton/Black Panther mode. Brandishing the Bop Gun on one side and the Flash Light on the other, with the One Nation flag hanging in the background, with Clinton sitting in a wicker peacock chair in army fatigues with a joint dangling from his mouth. Musically, Uncle Jam offers a slightly uneven musical statement, saved mostly by the 15-minute masterstroke “(not just) Knee Deep.” Another Junie Morrison-directed classic that features the “vocal assault & Funkatition team” led by guitarist/vocalist Garry Shider, as well exquisite operatic vocals from former Friends of Distinction singer Jessica Cleaves.

THE ELECTRIC SPANKING OF WAR BABIES

The turbulent dealings between Funkadelic and WB finally comes to an end with the release of the last Funkadelic album for the label. Starting with Clinton’s desire to release Electric Spanking as a double album set sold at a discounted price (double albums by Prince and George Benson would be sold at a discounted price years later). Once again, WB balked at the idea. Trouble with fellow WB artist Roger Troutman also compounded the problems between the two parties. Ironically, one of the tracks originally recorded during the Electric Spanking sessions went on to become George Clinton’s biggest of the 1980s, with the Number One smash “Atomic Dog.” The released single disc signaled a glorious return to Westbound-era musical sensibilities.

From the Junie Morrison-driven title track to the thoroughly X-rated “Icka Prick,” to the Sly Stone-Bootsy Collins-Roger Troutman mash-up “Funk Gets Stronger,” Electric Spanking is, as George himself would brag, “the one for the fans”. While Funkadelic’s tenure at Warner Bros. only lasted five years, it was a period that produced the band’s most celebrated and influential recordings. One Nation Under A Groove was ranked number 177 on Rolling Stone magazine’s list of the 500 greatest albums of all time, while the single “(not just) Knee Deep” has been sampled countless times by artists such as Digital Underground, Bobby Brown, and most notably De La Soul, who in 1989, scored a number one R&B hit with “Me, Myself and I.”