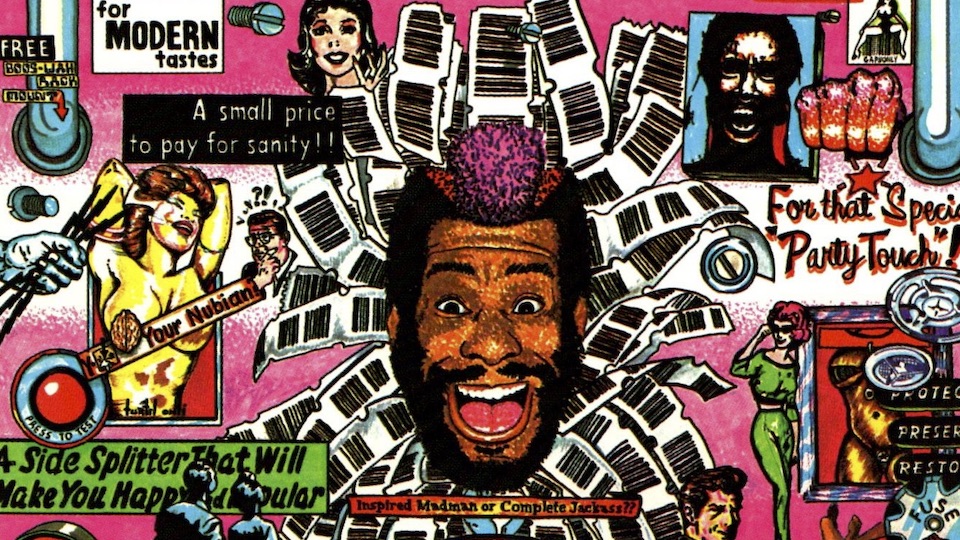 Summer 1982: George Clinton is facing a precarious period in a long-standing and storied career. Both of his bands, Parliament and Funkadelic as well as his various spin-off acts, have been dissolved. After six years of producing the most influential music of his era, he suddenly finds himself a pilot without a Mothership.

Through a series of “field maneuvers” initiated by former P-Funk business associate Nene Montes, Clinton would score yet another record deal. This time with Capitol Records, under the one title he vowed never to use: his own.

Upon arriving at Capitol, George would release four studio albums that would feature most of the prominent members of both Parliament and Funkadelic (now going under the sports-inspired title “P-Funk All-Stars”). All of the album covers would be designed by Pedro Bell, whose twisted, warped vision could be found on the covers of all of the Funkadelic releases from 1973 to 1981. The musical innovation and ferociousness (modified for 1980’s era groove enthusiasts) that defined P-Funk’s 1970s output was on full display during what Clinton called the “Splank Decade.

Kong Your Donkey! Released in the same month as Michael Jackson’s Thriller, Computer Games zeroes in on George’s then-current obsession: arcade video games. The album’s first single, “Loopzilla,” would start the national buzz. But it would be the album’s second single “Atomic Dog” that takes George back to the number one position on the Billboard Black Singles charts (ironically displacing Jackson’s “Billie Jean”). “Atomic Dog” would also establish George’s other obsession: the life of canines. The similarly themed “Man’s Best Friend” and “Get Dressed” would also be released as singles.

Introducing Clint-O-Vision! Appearing in record stores on the same day as the P-Funk All-Stars debut album Urban Dancefloor Guerillas, You Shouldn’t-Nuf-Bit-Fish assumes the role of Funkadelic as opposed to All-Stars adopting a more Parliament-sounding approach. Side one of Bit Fish is so strong and masterful, that all three tracks (“Nubian Nut,” “Quickie” and “Last Dance”) were released as singles. The title track finds George giving his own unique spin on the nuclear arms race. Both albums were supported by an extremely short live tour in 1984.

SOME OF MY BEST JOKES ARE FRIENDS-1985

The Atomic Slam Stereo! George’s third disc for Capitol places him into the world of foreign espionage. Secret agent “Double Oh-Oh” casts a spell on all adversaries who cross her path, usually ending in pleasures of exhaustion. With this release, George finds yet another collaborator to help plot the future of Funk: keyboardist Thomas Dolby. His involvement on the tracks “Thrashin'” and the title track give the music an extremely fresh and innovative feel. Clinton would return the favor by joining Dolby’s short-lived project, cleverly called Dolby’s Cube (which also features singer Lena Lovich).

With just a little more effort, George could be a fine credit to his race! Clinton’s last studio album for Capitol tackles the issue of crossover. Meaning: Black artists altering either their sound and/or their appearance to attain widespread success. In other words, “What to drop to go pop!” For this mission, George recruits an extremely unlikely advocate: formerly dethroned Miss America Vanessa Williams, who lends her very commercial vocals to the album’s second single “Hey Good Lookin.” A month after the album’s release, Clinton led the P-Funk All-Stars in a performance of “Do Fries Go With That Shake?” on NBC’s Saturday Night Live (which also featured an unannounced appearance by Thomas Dolby).

George Clinton finished out his contractual obligations to Capitol with a live album recorded in Houston, Texas on Halloween 1976 and a single-disc greatest hits release that finished out the year. Clinton’s tenure at Capitol proved to be far less controversial than Funkadelic’s time at Warner Bros. While this particular period produced the highly influential and much sampled Atomic Dog, subsequent albums mainly served as “fans only” affairs that kept the P-Funk name in the public eye within an industry that was totally indifferent to the Funk movement Clinton championed in the 1970s.

(And before we forget, HAPPY 80TH TO THE DR. FUNKENSTEIN “HISSELF”, MR. GEORGE CLINTON!!!)

Image from cover of You Shouldn’t Nuf-Bit-Fish