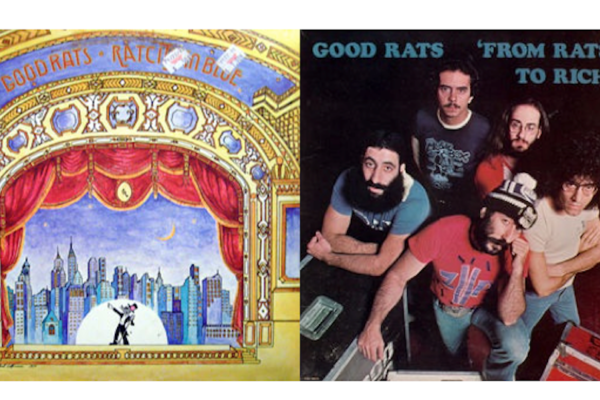 They are one of the great bar bands of all time – and anyone from the New York City area probably remembers them from the ‘70s and ‘80s. We got Michael Olivieri, their manager from back in the day, to share a few memories….

During the ‘70s, I was working in New York, doing promotion for Warner Brothers. Part of that gig involved some live radio concerts on legendary stations WNEW and WLIR. A tape of the Good Rats came over the transom, and I listened. The thing that struck me about the band was how clever their songs were; it wasn’t the usual stuff you were hearing from bands at that time. Then, I saw them at My Father’s Place on Long Island, and was impressed at how the crowd reacted. They were clearly a truly great bar band, and I was hooked.

[amazon template=right aligned image&asin=B0008JGTXA]I had never done any kind of band management, but these guys impressed me and I wanted to help. When their 1974 album, Tasty, was in the works, I knew they were something else – although they weren’t what traditional labels were interested in. This was always an issue, and probably the reason they never quite broke into the big leagues (despite having Long Island fans like future stars Alec Baldwin and Rosie O’Donnell – who weren’t at their peak, but whatever….)

During the ‘70s and early ‘80s, the Rats had the chance to open for folks ranging from Springsteen and Aerosmith, to Kiss and Meatloaf. Meatloaf was one in particular who was aware of their appeal – but after just a few dates, their gig with him was done. They were their own thing and I don’t think he wanted to follow what they did. That’s just how the business goes. Think Little Richard having to follow Jerry Lee Lewis back in the day…

On the flip side, there was another time when we all went to check out Iggy Pop at My Father’s Place. I could tell that the guys were like, “What the hell IS this?” I don’t think the guys liked his act at all – but like I said, in the music business, it can get pretty competitive.

Then again, I remember when they were working on an album called Birth Comes to Us All in London. They used a studio owned by John Entwhistle [of the Who] for some of the tracks. He hung around in the shadows, listening, and although he was quiet and shy, we got the sense that he liked what he was hearing. That was a big rush.

Speaking of London, when we played some shows in the UK, audience members weren’t quite sure what to make of these guys – but the band eventually won them over. Like I said, the Rats were their own thing, different than anything else going on at the time.

One thing fans may not realize is that, besides being a great singer/songwriter, Peppi Marchello was also quite an athlete. This is probably where his trademark “air guitar” using the baseball bat started. Not to mention his beating the hell out of the garbage can that was used as a regular stage prop.

But he would do other things, like picking up guitarist John Gatto on stage. John was pretty small, and it was crazy to see Peppi flipping him around while he was still playing. I mean, really….

I think a big part of the Rats’ appeal was that they were a “people’s band” – a kind of blue-collar unit. When Peppi played air guitar on that baseball bat, he screamed to the fans that he was one of “them.”

During their heyday, the Rats had the chance to open on some big stages: Hammersmith, the Garden, Philly – but truthfully, I think the smaller clubs worked to their advantage. I think they preferred the intimacy and closeness to their fans. It served their whole “shtick.”

We used to go into New York City and buy rubber rats by the gross. Throwing them out into the crowd at the gigs was the thing: people would dive for those rats like they were $100 bills! But it was nice to send audience members home with something to remember.

Some people have asked me about other bands you could compare the Rats to; that’s an almost impossible question. They were so unique, a ballsy bar band that played really well and with a singer who had a big, big voice. But if I had to pick a band, I’d say the Guess Who: I always got the sense that Peppi and Mickey liked what Burton Cummings was up to, and sort of assimilated it.

All these years later, I think what I want people to most remember about the glory days of the Good Rats was the quality of their songwriting and playing. They were so clever – one of my favorites is “Fred Upstairs and Ginger Snappers” [from Tasty]. They were just endlessly inventive. Peppi and his brother Mickey had a real appreciation for classic Tin Pan Alley stuff, and the fans picked up on the wordplay and sense of humor.

And as they once sang, “You all got to be a little twisted if you paid to hear us.”

Photo Credit: Fair use images of two Good Rats albums: Ratcity in Blue and From Rats to Riches.

PS. The Good Rats were among the groups you picked in our post Your 10 Favorite Bar Bands. Read about some other great acts in The Bar Band Hall of Fame.