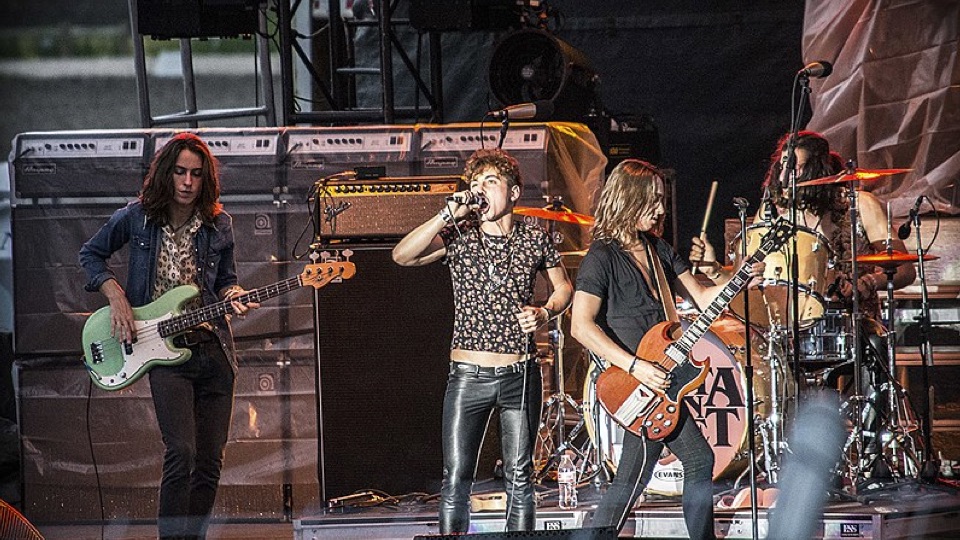 Amongst hip-hop and alt-rock dominated radio, Greta Van Fleet is the band that has garnered attention for capturing the style and sound of early 70s hard rock. On the surface level, the band is any classic rock fan’s dream come to life, and some have gone so far as to name them as the group who will bring back rock n’ roll. Although they’ve gotten praise for reviving the sound for a younger generation, there are two sides to any coin. The Michigan-made band of flower power 20-somethings has also been the subject of significant criticism for all but mimicking one band in particular: Led Zeppelin.

Greta Van Fleet has a sound that is both refreshing yet familiar. Although the band has listed the group as a large influence for them amongst other iconic bands, lead vocalist Josh Kiszka has been hesitant about acknowledging the Zeppelin comparisons. This hesitation may come from the fact that much of the criticism and comparison is directed at him, which must be a hard pill to swallow. The most obvious comparison has been Josh’s hard rock banshee scream, which sounds almost exactly like the voice of Led Zeppelin’s Robert Plant. Although he has been quoted as saying that he didn’t know or listen to Led Zeppelin until high school, whether or not Josh’s voice is a forced mirror of Plant’s voice or it’s simply his natural voice is of much debate. Regardless, it’s arguably a welcome deviant to the rock genre of today.

Josh’s twin brother and the band’s guitarist Jake Kiszka has cited his own influences, Pete Townshend and of course Led Zeppelin’s own Jimmy Page, going so far as to have intensely studied his guitar playing over the course of a year as a teenager (to his credit, intensely studying anything at all as a teenager is quite impressive).

In defense of Greta Van Fleet, it’s extremely difficult to be a young creative trying to make something that is uniquely your own without blatantly showing off your initial influences.

When comparing a band of teenagers to one of the most iconic rock bands to ever exist in any context, word gets around fast. In a 2018 interview with Led Zeppelin frontman Robert Plant, he puts to rest any rumored bad blood, but not without poking fun:

“I hate him… yeah, and he borrowed it (Kiszka’s voice) from somebody I know very well! But what are you going to do? That’s okay.” Plants said sarcastically of Greta Van Fleet’s lead singer Josh Kiszka. He also compares their current sound to that of Led Zeppelin’s album Led Zeppelin I, which might be the best compliment a band fresh out of high school could ever receive. The band from Michigan responded a few months later to Plant’s comments:

“It was kind of strange to watch, but it was quite flattering. I think he likes the stuff! That’s good, to kinda get that seal of approval. He’s one of the most fantastic singers ever… there are similarities, and I see it, so it was pretty amazing that he mentioned it.”

As a rock fan, it is admittedly both hilarious and frustrating to watch Greta Van Fleet consistently dodge the Zeppelin comparisons. Fortunately, it seems this classic rock “will they, won’t they” came to an end at the beginning of 2019, when the lead Josh Ksizak again spoke on the topic, calling for everyone to get over it.

“Obviously we hear the similarity… That’s one of the influences of ours. But at this point, it’s like, ‘Okay, we’ve acknowledged that. Let’s move on.’”

Even if you hadn’t heard any of their music, you can tell by their glam-inspired bohemian kimonos, jewelry, open chest shirts and leather pants (that are so painfully early 1970’s Led Zeppelin) that GVF has taken at least some inspiration from the blues-rock legends. Fans of classic rock have never been the most tranquil about their favorite bands, and to have thousands of very “passionate” fans constantly belittling your success must be discouraging, to say the least. Regardless of the accusations that have plagued the band’s career, the band has been an important part in bringing back a sound that was once thought lost. The praise they have received from several icons of the industry should be more than enough to settle any doubt about Greta Van Fleet’s talent.  I must say, for a band of long-haired 20-year-old rock stars, they’re unnaturally humble.

The band is set to release an album before the end of 2019 following their previous projects From the Fires and Anthem of the Peaceful Army.