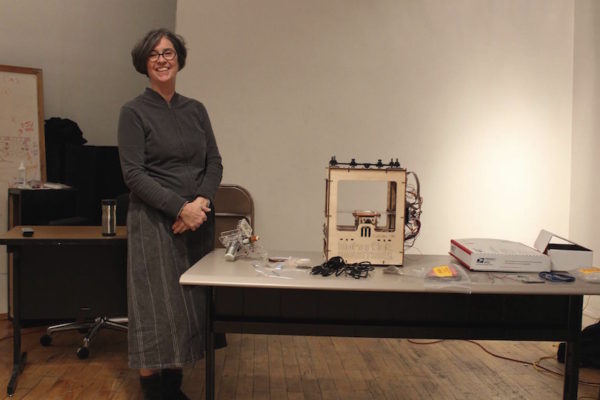 Carol Parkinson didn’t start Harvestworks in 1977 — that was done by electronic music composer Greg Kramer and sound artist Gerald Lindahl — but she was a fan of the organization early on. Her own deep involvement with it really started with TELLUS, the Audio Cassette Magazine that distributed new music, sound art, poetry and drama created by experimental artists in Lower Manhattan in the early ’80s. Now as the current Executive Director of Harvestworks, she’s taking the organization to new places while staying true to its original mission of celebrating new technologies and their applications to the arts.

Q: You just opened a virtual reality lab. Is there a VR experience you’ve seen recently that you’ve especially enjoyed?

A: Our new lab,The Analog to VR Studio, is a special opportunity to experiment with analog control (via analog synthesizers and MAX) of VR objects and environments. Currently we’re in the development of a couple of projects that we’ll present in 2018. Last year was a big year for Augmented Reality. Harvestworks’ Artist in Residence Kristin Lucas completed her AR project, Dance with FlARmingos, that was exhibited at the Engadget Alternate Reality Experience. In our 2017 New York Electronic Art Festival, we exhibited The Flower Matrix, an AR experience created by Claudia Hart. Also, last year’s Creative Technology Week gave us an opportunity to exhibit hacek, a VR experience by Margaret Schedel and Melissa F. Clarke.

A: So far, the Digital Museum of Digital Art by Alfredo Salazar-Caro. Alfredo was an Artist in Residence at Harvestworks, and we helped him to realize DiMoDA 2.0. The DiMoDA VR building is intended as a home for contemporary digital art and an incubator for new ideas. Artists who were exhibited in the DiMoDA 2.0 included Rosa Menkman, Miyö Van Stenis, Theo Triantafyllidis, and Brenna Murphy. The artists change with each version of the DiMoDA. It was conceived in 2013 by Alfredo Salazar-Caro and William Robertson. As the Executive Director of a community-based art center supporting artists working in emerging media,  I love all of Alfredo’s artists!

Q: In 2015, you curated an electronic film festival at the Museum of the Moving Image that involved karaoke, performance installation, and storytelling. Was there a specific experience at that festival that was particularly surprising to you?

A: The whole thing was pretty awesome because MoMI has such a great space; but two outstanding artists were Taiwan artist You-sheng Zhang (a.k.a. Sovietronic) and Hong Kong artist Samson Young. For the Taiwan artist, we were lucky to be able to work with the Taipei Cultural Center and media curator Juliette Yuan. Sovietronic is a no-input noise artist who had great control over his feedback systems. Samson Young and the Mivos Quartet started with Beethoven and, through monitoring the data from the ensemble, Samson turned the movements of the ensemble into a noise composition. We have a video on our YouTube Channel of excerpts from the Samson Young performance. It was great!

Q: You also host an electronic arts festival every summer on Governor’s Island. How does your curating change when you’re programming here vs. at your home base in Soho?

A: It’s great to work on the island. Not only do I get a bit of country on the weekends, but we’re able to exhibit new media and sound art works that need a larger space and longer duration to be fully appreciated. The exhibition is installed in one of the former military quarters in Nolan Park that’s basically a three-bedroom house with a dining room and a parlor. We spotlight works from the Harvestworks Artist in Residence Program, our T.E.A.M. (Technology, Engineering, Art and Music) lab and new works created in our local, national and international community. The challenge for the festival exhibition is to come up with a theme that reflects the character of the works and to present them in a cohesive environment.

It’s also a pleasure to curate it for a family-oriented general audience. That’s an audience we don’t usually see in the Soho space. That one is more geared toward the artist community and those who are curious and avidly interested in their culture. They have technical knowledge to share and they want to be inspired by individuals who are using technology creatively. In Soho, we can exhibit more advanced technical work because we have the resources of our studios and engineers to help during the install process but, because of our limited space, the artwork can only be up for a couple of days.

Q: What do you have coming up at Harvestwork later this season?