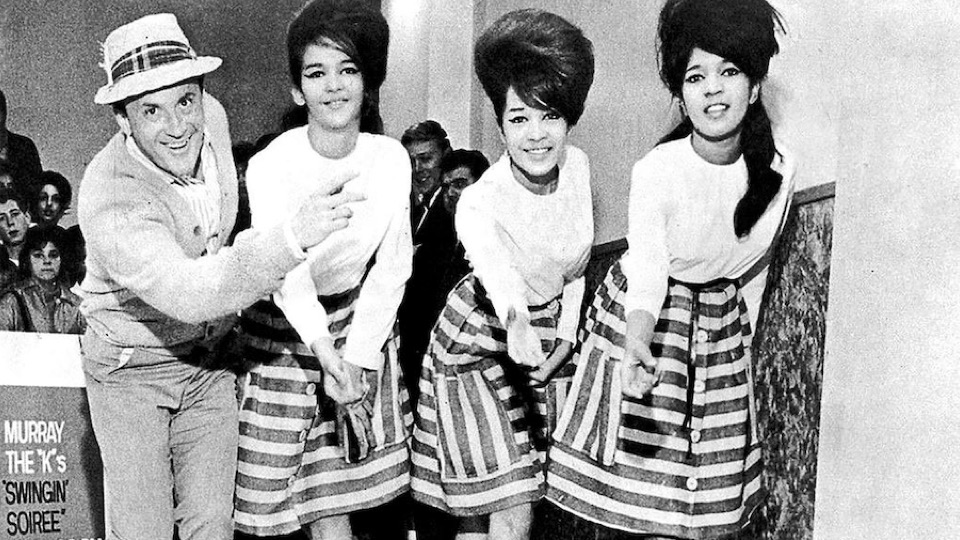 During Murray the K’s reign as the most well-known disc jockey in the 1960s, he may have thought of his monstrous New York City audience the same as the Wooderson character (as portrayed by Matthew McConaughey) in the film Dazed and Confused said of his small Texan audience:

“That’s what I love about these high school chicks, man.  I get older, they stay the same age.”

And in the 1965 TV concert film, It’s What’s Happening, baby!, the then 43-year-old, porkpie hat-wearing Murray “dances” with teens who shimmy and shake around him on the Brooklyn Fox Theater stage.  Then again, he had many reasons to shake his tail feather, thanks to the show’s rockin’ roster:

The Dave Clark Five, Johnny Rivers, Dionne Warwick, The Supremes, The Temptations, Patti LaBelle and the Bluebelles, Jan and Dean, The Drifters, Smokey Robinson and the Miracles, Martha and the Vandellas, the Four Tops, Herman’s Hermits, Ray Charles, Marvin Gaye, Mary Wells, The Ronettes, The Righteous Brothers, Cannibal and the Headhunters and more.

Even Herman Munster (Fred Gwynne) in full Frankenstein make-up pops up, lumbering around a Malibu beach in Kiss-like platform shoes and frightening the bejesus out of fainting teens.

The concert and Murray’s fame wouldn’t have occurred if the New York City-based DJ wasn’t the “Fifth Beatle,” a name George Harrison bestowed on him.

Murray befriended the Mop Tops at one of their first American press conferences in New York.  Mr. K., who was luckily sitting in the first row of the crowded press corps, got in a few questions then a conversation with the lads.  As Murray recalled in his 1966 autobiography, Murray the K Tells it Like It Is, Baby:

“Finally, one CBS news cameraman shouted the now-famous line, ‘Tell Murray the K to cut that crap out.’  Ringo said, ‘Hey Murray.  Cut that…(pause) what he said, OUT.’  Everyone laughed except the cameraman!”  Murray the K’s son, Peter Altschuler, noted that George Harrison broke the tension by saying, “That’s okay.  He’s the fifth Beatle.”

Murray’s high profile with the youth of America caused higher-ups in the government to take notice, namely William C. Haddad, then the Inspector General of Sargent Shriver’s Office of Economic Opportunity.  Sargent, who was the brother-in-law of John F. Kennedy and an originator of the Peace Corps, asked William to see if Murray could subtly sway troubled kids from not dropping out of school by making some radio and TV promotional spots with other popular personalities of the day.  T.J. Lubinsky, a producer at PBS who convinced the network to monetarily back his effort to restore this musical masterpiece, noted that Murray successfully argued to the OEC:

“There’s no better way to connect with young kids than their music.  So I’ll put this great list of artists together and we’ll ask them to be a part of it.”

And there are some parts of the show that will make a viewer text his contact list: “You should’ve seen what I just saw!!!!!!”

Like, The Ronettes in Little Italy, imploring (through song) a disinterested hot dog munching lout to be their baby, only for him to show interest when they show him that they’re holding foot-long Italian subs.

Or, Herman’s Hermits in midtown Manhattan lip-synching “Mrs. Brown, You’ve Got a Lovely Daughter” without one pedestrian bothering them; no doubt because the only way a phone could be stuck in singer Peter Noone’s face back then was if he was standing inside a phone booth.

And then there’s the program’s showstopper, Little Anthony and the Imperials doing mind-bending and knee-bending dancing combined with stunning splits (Editor’s Note: clip is from an earlier Murray the K show).

That caused Paul Williams of the Temptations to admit, “When we looked at the jumps, we looked at each other and said, ‘We better go out there and step.  They are not joking around.  We better dance like we’ve never danced before.”

But leave it to adults who act like they were never kids to denounce that the kids and their music are not all right.

Senator Gordon Allot of Colorado took to the Senate floor the next day to bark that the show was “one of the most shameful and degrading I ever viewed.  The people of this country were insulted and degraded by the kind of program put on by Sargent Shriver and his group.  Every American who saw the film must be sick.  The whole program was tuned to the lowest type of beatnik appeal.”

Unfortunately, the backlash from politicians and the press caused What’s Happening… to never come back on the air—until over fifty years later when T.J. Lubinsky got into the act.  He found that the passing of much time had eroded all entire tapes of the show. Lubinsky also found that Murray’s son, Peter Altschuler, had individual clips of all of the acts which were then restored and recently shown on public television after a 56-year-old hibernation (at this writing, the DVD version is only available as a membership premium).

The show is not only a fascinating time capsule but also stacks up extremely well with another legendary 1960’s concert film, The TAMI Show. Both shows featured an all-star lineup that spent more time on the charts than Murray the K. ever spent with his six wives.

Photo: Murray the K with the Ronettes, 1962 (Wikimedia Commons)