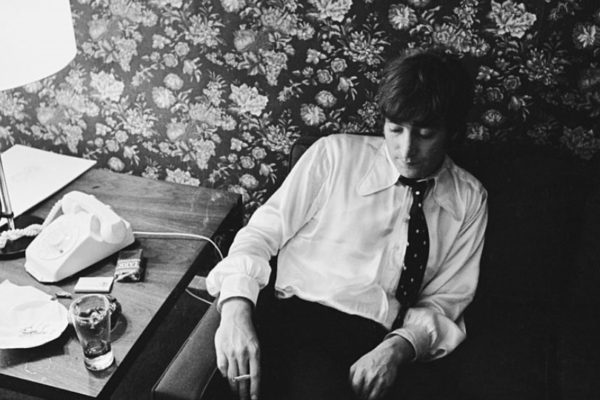 There have been myriad books written about John Lennon, but only three purposefully written by the man himself. Wildly experimental in tone, spangled with his own surreal illustrations, and often best classified as “experimental fiction,” these three idiosyncratic creations are In His Own Write and A Spaniard in the Works from the mid-1960s then Skywriting by Word of Mouth, somewhat of a coda published posthumously in 1986. Naturally, even though this is fiction, Lennon makes a few allusions to the band that made him a household name, but these volumes provide an intriguing glimpse into a man whose wordsmithing and quirkiness extended beyond penning lyrics for a song or two.

In His Own Write (1964)
While The Beatles were peaking as a global entity, Lennon’s early foray into fiction sold briskly from the get-go, thanks in part to the already-iconic status of its author. His head-spinning stories and oddball meditations are hallucinogenic, anarchistic and utterly whimsical in tone. Paul McCartney wrote an affectionate intro for the first edition, essentially encouraging the readers to relax and enjoy the raucousness. Later editions feature a few words from Yoko Ono who welcomes readers to his alternate universe with the salutation, “Hi! My name is Yoko Ono. I’d like you to meet John Lennon.” Throughout, Lennon’s wordplay is downright Joycean with its flights of fancy, musicality, and unapologetic weirdness. This compilation of nonsensical essays, poems, plays, and original drawings showcase an amazing gift of goofy badinage but will frustrate the hell out of anyone who needs a straightforward story. But if you’re not uptight that way, communicative fat growths on people’s heads, wrestling dogs, and James Thurber-esque drawings lie ahead.

A Spaniard in the Works (1965)
This follow-up flight of inspired absurdity may have sold less but Lennon didn’t seem to be overly invested in making any best seller lists. More a deliciously personal experiment, A Spaniard in the Works gets its title from a pun on “a spanner in the works,” which is British slang for one glitch that wrecks an entire plan. Over 18 mini-chapters of cartoons, verse, and tall tales, Lennon gets a tad more scatological this time around. Some politically incorrect language surfaces now and then while poignant bitterness bubbles under the surface. The chapter “Our Dad” deals with the eviction of the patriarch from the family home, and feels incredibly revealing given the real-life reality of Lennon’s abandonment by his own father. But don’t strain too hard to find real-life equivalents. Instead, lean into the crazy with all its linguistic twists and hypnotic landscapesy.

Skywriting by Word of Mouth (1986)
This one didn’t hit the bookstores until six years after Lennon’s murder, even though it was written throughout the 1970s. As Yoko states in her affectionate afterword, “John wrote Skywriting at a time when the world was wondering whatever had happened to him. Why wasn’t he writing songs anymore? Well, this is what he was busy doing.” Fans eager to devour these formerly private thoughts of the cataclysmic break-up of The Beatles will find only snippets of the harsh times. The opening chapter “The Ballad of John and Yoko” gives a truncated account of those painful days, and doesn’t shy away from noting the racist and sexist treatment that Yoko underwent by the press at that time. But Lennon hardly seems mired in the past. He touches lightly on the final “divorce” of The Beatles. And states succinctly: “I started the band. I disbanded it.” Skywriting… is meatier than its predecessors, but it’s also just as irreverent. Where else would you encounter a character named Dr. Winston O. Boogie?

0 comments on “The Literary Wonderlands of John Lennon”