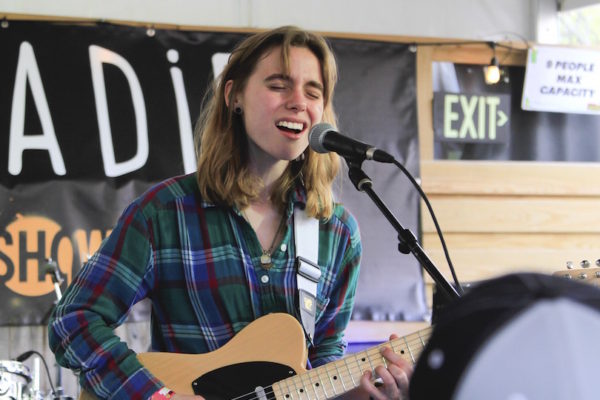 The haunting instrumental “Over,” the first track on Julien Baker’s latest CD Turn Out the Lights, starts with a door closing, maybe opening, thereby setting the tone for rest of an album that addresses the raw emotions of troubled relationships, domestic abuse, and an un-settled sense of self. Throughout this release, musical accompaniment is minimal with Baker on keyboards and guitar with occasional strings added on several of the songs. In interviews, Baker has said she grew up Christian in Memphis but her religious references are raw and sometimes akin to those of a fallen angel: “It’s not that I think I’m good, I know that I’m evil.” These are views are way more aligned with Patti Smith’s Horses than your typical pop evangelist. And, though the sparse arrangements allow you to focus on the lyrics, you also can’t help but wonder what it would be like to hear Baker with a full-blown rock band.

The material is not for the faint of heart and an artist of lesser talents would’ve sounded self-pitying. But Baker’s brutally honest wordsmithing and compelling vocals make for quite a revelatory experience. Consider “Appointments,” her song referencing missed therapy session,s but with something weightier as the crux of the song. Backed by DIY guitar and piano, Baker creates an intense mood as she reveals her dark emotional state while trying to stay positive despite a bleak outlook. And while her voice starts out small, she eventually breaks out with a surprising force towards the end as if demanding attention. You also get a sense of isolation from the title track in which Baker harmonizes with herself, which frankly magnifies the sense of aloneness. As with “Appointments” the song builds to a crescendo as solitude turns into loneliness: “I just wanted to go to sleep, when I turned out the lights there’s no one left between myself and me.”

Not everything is simply self-reflective. “Televangelist,” for instance, springboards from internal realities to a larger world embodied by its titular subject as the very personal first line “my heart is going to eat itself, I don’t need anybody’s help” eventually evolves into the much more dramatic query: “Am I a masochist screaming televangelist, clutching my crucifix?” And pain is definitely in the spotlight here. Even a song like “Hurt Less” — constructed more like a traditional ballad with its gentle melody woven around acoustic piano and strings — which expresses hope that relationships can be comforting, also gives you the sense of someone nursing their wounds.

Perhaps that ability to look at both sides of the coin is what makes Turn Out the Lights so effective. In “Even,” the self-hate generated by domestic violence comes disturbingly to the fore while in “Claws in My Back, the CD’s final track, she concludes that the resolution to her turmoil may be not in overcoming her demons but instead coming to terms with them. It’s here that she lets us in on a secret: her demons and her saints are the same. That’s not a simple truth by any means.

0 comments on “Julien Baker’s Unsettled Self In Song”