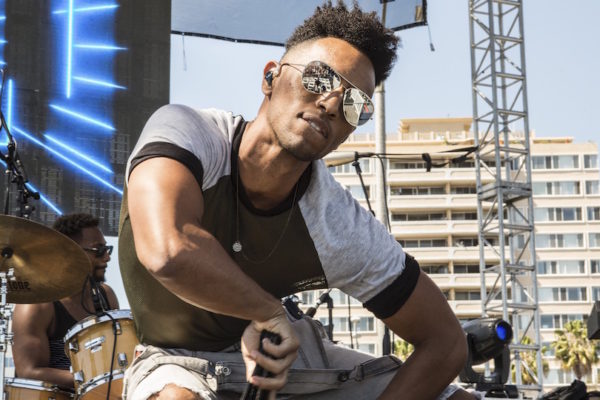 A relative newcomer to the pop music scene, Justin Michael Williams certainly arrived in fine style (and with quite a bit of fanfare): His debut album Metamorphosis premiered in the top 20 of iTunes pop chart and he’s playing at this year’s SXSW. Billboard has labeled his music as “intoxicating”; the NewNowNext, as “haunting.” That he’s easy on the eyes doesn’t hurt either. What’s the key to his success? What’s he got coming up? And what music does he listen to before he goes on a date? Answers to all these questions and more lie ahead.

Q: Meditation has been an instrumental part of your career. Can you tell us a bit more about your work in this area?

A: If it weren’t for meditation, I would not be the artist I am today. Three years ago I had never even set foot in a recording studio, and today I have an iTunes Top 20 album. (I still can barely believe it when I say that!) I attribute this success to meditation — it has taken me on the express elevator to my dreams and goals of becoming a recording artist. I’ve been meditating for over ten years now and was called to start teaching meditation to urban millennials a few years ago when I realized that there were so many people who didn’t have a teacher who looked like them, sounded like them, or understood their problems. Meditation is different when you grow up gay or black or in a marginalized community. There are a different set of problems and circumstances that we face — so the toolkit needs to be different.

Q: If you were to put together a mix-tape of pop music for meditation, what are some songs that might be on it and why?

A: Oh, I love this question! A lot of people think that in order to meditate with music you need to listen to OM-ing, chanting, and gongs. Don’t get me wrong, I love that stuff too — but pop music can be great for meditation in the right circumstances.

Turn the music on and let yourself dance, breathe, flow, and allow the waves of emotion (joy, excitement, anxiety, fear, sadness) to come up and pass through you. Then turn the song off and sit and breathe in silence for two to three minutes. It’s magic.

Q: Your recent mini-medley “Stay Woke” draws from Beyoncé, Kendrick Lamar, and Michael Jackson. But what song might you cover if you were pulling from the Beatles songbook?

A: “Come Together” would definitely be the track. It says everything I wanted to say as a part of this movement.

Q: You’ve teamed up with the It Gets Better Project in the past. Can you share a bit more about this?

A: I teamed up with the It Gets Better Project for the launch of my Divas Medley Mini-Movie that I created to celebrate PRIDE month. I was able to join forces with some of the most recognized names in drag and trans culture to recreate the most iconic scenes in pop culture. This video is still my most viral video to date and was an honor to use the video as a way to raise awareness for the It Gets Better project.

Q: At this year’s SXSW, you’re performing at a Presbyterian Church. Any chance you’ll include anything spiritual in your setlist?

A: Absolutely! Most people say that my shows are a bit of a “spiritual experience” so this couldn’t be more of a perfect venue. I always do a bit of talking and storytelling during my shows, and I plan to take that even further during my SXSW showcase.

Q: Metamorphosis, your debut album in 2016, premiered in the top 20 of iTunes Pop Chart. When might we expect your next album?

A: I’m in the studio working on new music right now. The success of my first album was a dream come true, but I’m still a relatively “new” artist so I’m spending time this year collaborating with other artists and producers to expand my artistic horizons. I love collaborating because there’s always something completely new and unexpected that’s birthed through the process. I’m not planning on releasing another full album this year, but you can expect a lot of singles from me in 2018.

0 comments on “Justin Michael Williams Wants People to “Come Together””