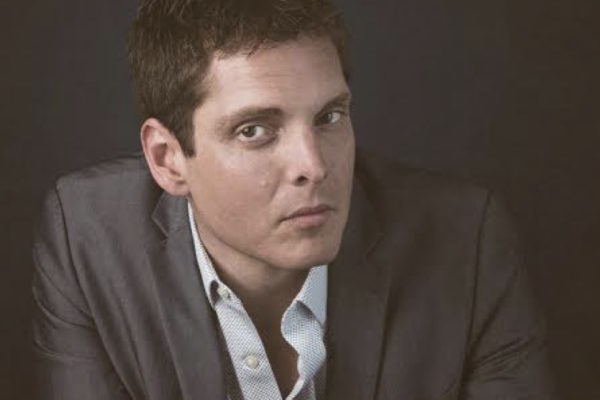 As the leader of Seattle-based band Red Jacket Mine, Lincoln Barr has made several albums that marry power-pop infectiousness with an almost Steely Dan-inflected sophistication. But on his first solo album, Trembling Frames, singer, songwriter, and guitarist Barr has taken a drastic detour on just about every level. In place of his band’s driving, pop-savvy sound are acoustic-based arrangements of fragile ballads filled with jazzy harmonic structures. And while Red Jacket Mine‘s songs were always loaded with vivid lyrical imagery, the tunes on Trembling Frames are coming from a much more personal place — one that requires more than a bit of bravery to document with this degree of honesty. More from Barr himself follows below.

Q: What made you shift to such a different style for this album?

A: As a pop music appreciator, I’ve always been drawn to jazzier, more “sophisticated” fare, be that Bacharach, Steely Dan, or Prefab Sprout. So naturally, as I began to unlock some of the harmonic mysteries that lay within those songs — a lifelong process, I assure you — my attention was drawn to the so-called Great American Songbook. I started to get more curious, and began slowly chipping away at learning a few standards for my own amusement.

Q: Why was it a solo project instead of a Red Jacket Mine record?

A: My wife and I moved from Seattle, our home of 12 years, to central Washington so she could attend medical school. This physically separated me from the rest of my band, so while I didn’t necessarily set out to write and release a solo album, the idea certainly had a practical appeal when it arose. The songs were the real driver behind my decision to release Trembling Frames as a Lincoln Barr album. I found myself speaking, sometimes quite plainly, about deeply personal and painful experiences — some of them ongoing, some buried deeply in my past — all of which I’d glossed over with a clever pop facade when writing for Red Jacket Mine. It’s not that I chose not to write about these things with the band; I didn’t know I needed to, and I wouldn’t have known how. When I realized what was happening, I knew I had to stand behind these songs with my own name.

Q: Can you talk a little about the experiences that inspired these songs?

A: I am a survivor of child abuse, and unfortunately, I’m not the only one out there. When you grow up in that environment, you’re told over and over: don’t tell anyone this happened. That vigilance, that secrecy becomes part of your personality. I didn’t recognize this as a story worth telling for 30 years, and it took several more before I knew how to begin. Talking about it, let alone singing about it onstage or on record, still feels deeply transgressive. But it’s also led to some truly amazing experiences — cathartic and dare I say healing, at least for me.

Q: Given the intensely personal nature of these songs, is it an emotional challenge to perform them live?

A: Learning to present these songs in a live context has been one of the greatest challenges of my career. Writing and recording them was easy by comparison. In over a decade fronting Red Jacket Mine, I’d developed a kind of “surly court jester” persona — a defense mechanism, to be sure, but great fun and complementary to the wry tone of the music, in most cases. I found out quickly that presenting these songs with that type of between-song banter simply would not work. I needed to find a way to be forthright and sincere, without being over-earnest or pathetic, or pretending to be someone I’m not. It’s a balance I’m still refining.

Q: What can you say about the idea behind the opening track, “Admit You’re a Monster”?

A: With the name-checked Jake LaMotta having recently passed, I kept thinking of that prison scene in Raging Bull… the torment, the desperation. I re-watched it recently, and I really felt for him. He’s driven by forces not fully in his control, and I can relate to that. This song is also about taking ownership of your own wounds, though, and calling out your tormentors. It’s an important step, I think, to realize you can feel empathy and pity while also saying, “Hey, you did this to me, and it was wrong.” This is a first take, live to tape. Levon Henry’s clarinet was the only overdub, and it’s a real good one.

A: “Tell it to the Judge” isn’t as playful as “Admit You’re a Monster,” but they’re cut from the same cloth. They’re angry, and they know they have a right to be. They’re not particularly interested in excuses or rationalization, not right now. I love playing this song live… the tempo is so languid, and there’s so much space. [Calexico drummer John] Convertino’s brushed triplets on the snare during the guitar solo kill me every time. I’m also pretty sure it’s the only instance of the word “peristaltic” being used in a pop song.

Q: You’ve said that “How To Escape” is the song that started all this. How so?

A: After a long drought following Red Jacket Mine’s Pure Delight EP, when I couldn’t come up with anything that didn’t feel derivative and dull, this song just fell out one day in late 2014. The harmonic language and mood were drastically different — I don’t think I’d written a minor-key song for Red Jacket Mine in years — and the lyrics were an act of self-revelation. The couplet “I used to think resistance made us strong / I only could believe that for so long” could’ve ended up on my headstone, but I’m glad it didn’t.

Q: Do you have any plans for working with Red Jacket Mine again?

A: We’re all close friends, and that door is absolutely open, but for mostly practical reasons, I don’t think there will be a new Red Jacket Mine album very soon. We’re all very busy and more geographically distributed than ever. Who knows, though? I’m trying not to plan too far ahead these days.

Q: What do you want listeners to take away from Trembling Frames?

A: It’s a story of survival, if not quite triumph. It’s about human frailty and fragility, but also resilience. Honestly, I’m still figuring it out, but what I do know is, I’m still here — and that could very well have not been the case.

Trembling Frames is out now on Showpony Records.

Photo courtesy of the artist