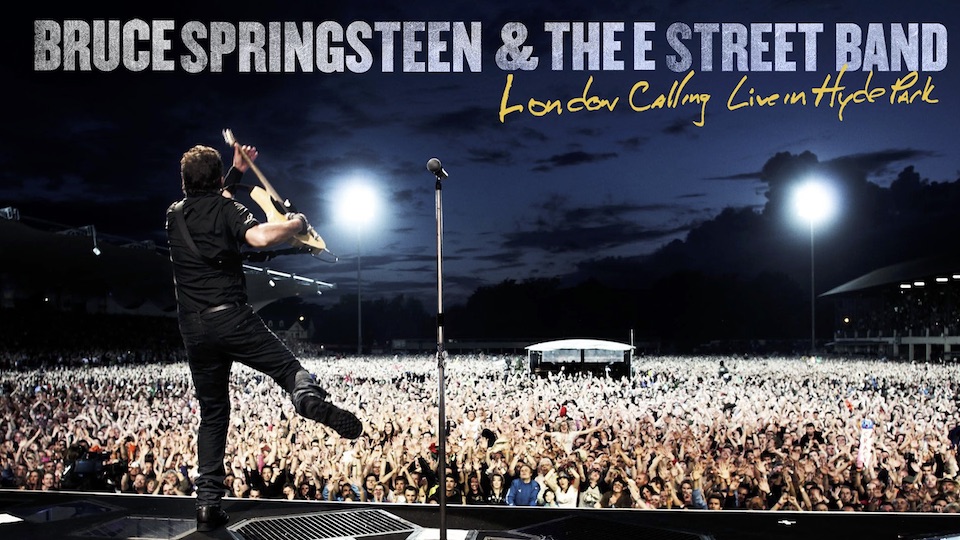 It’s getting harder to find the energy, the will or the imagination to discover new ways of entertaining ourselves. Luckily Bruce Springsteen, a tent-pole of generosity dating back to the seventies, has made the rampant boredom a bit easier to swallow. Springsteen just posted his 2009 Hyde Park show onto YouTube and Apple Music, proving that this is a boss who truly cares for those in need. It’s a fiery concert, one sure to pump you up at this time of social distancing. The original film was directed by Thom Zimney and Chris Hilson before it was released on Blu-ray/DVD in 2010. The film sold well, but this is its first digital release. Lucky us!

The band gathers on the London stage, tipping their hat to the English capital with a cover of The Clash’s galloping “London Calling.” From then on, the covers stop, the band charging into a thirty-year setlist that’s almost as impressive as Paul McCartney’s.

The drums lead into the Darkness on The Edge of Town standout “Badlands,” as a wave of hands throws their phones and cameras in the band’s direction. A master of performance art, Springsteen swings into his guitar with Townshend-like swirl. He bellows “She’s The One” with the trademark holler that takes its listeners all the way back to the seventies. Between these two songs, Clarence Clemons belts out “Night”‘s exultant saxophone riff. Springsteen is armed with a fine bunch of musicians who play for nearly three hours, which makes their endurance comparable to those characters in Peter Jackson’s The Fellowship of The Ring.

Guitarists Nils Lofgren and Stevie Van Zandt provide their vocalist with added backbone, but Springsteen tackles many of the lead parts himself. He plunges headfirst into the punchy “Working On a Dream” lick, while pianist Roy Bittan supports with some boogie-woogie backing. Drummer Max Weinberg is as reliable and steady as ever, while vocalist Brian Fallon helps with the intricate harmonies.

Incredibly, the show feels mildly dated. In the ten years that have elapsed, music has focused less on the chorus and more on the verses. This stadium swagger, then contemporary with The Killers and The Strokes, now seems a little overdone. Yet it’s still exhilarating in all of its spectacle. Regardless of era or decade, Springsteen is in fine voice and his band in perfect synergy.

The pop-oriented “Waitin’ On A Sunny Day” is met with a joyous cheer along from the crowds, the riff-heavy “Radio Nowhere” with greater joy still. “No Surrender” is sung as if Springsteen’s life depends entirely on it, his face bursting under the song’s tremendous weight. Fallon takes over the verses, matching his co-lead’s commitment and intent. If the gig can claim a standout moment, this is it!

The magnetic “Jungleland” maintains its audience for ten protracted minutes, as the sun fades down behind them. Bassist Garry Tallent chugs through “Dancing In The Dark” with particular flair, as Springsteen smiles in the knowledge that the crowd knows the lyrics better than he does. One person holds up a “Now I Wish I Was Courteney Cox” banner and the atmosphere is one of total joy.

Without some of our usual fun to revel in, there’s no shame in enjoying others jiving to The Boss. It makes for rollicking viewing, with Springsteen’s voice in impeccable form. There’s glamour to the footage, not least as the credits close with the opulent “Raise Your Hand.” We don’t need to work on our dreams; Springsteen’s brought the dream to our living rooms.