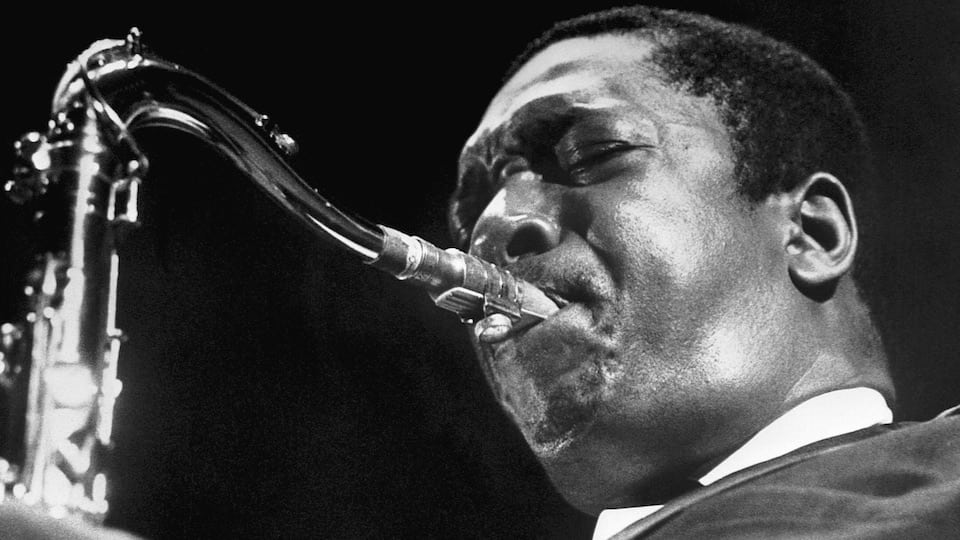 When saxophonist John Coltrane left this earth in 1967, he joined the infinite dimension from which his revolutionary music originated. Having expanded the vocabulary and conceptual possibilities of jazz possibly more than any other musician of his generation, the mythology and fascination with Trane continues to grow as the decades pass. So when it was revealed that the tapes for a “lost” John Coltrane album had been unearthed, the phrase “historically significant” was the understatement of the year. But what makes Both Directions at Once: The Lost Album such an exciting work is the time and context in which it was recorded, one of profound transition for Trane and his “Classic Quartet” featuring pianist McCoy Tyner, bassist Jimmy Garrison, and drummer Elvin Jones. No exaggeration: It’s the jazz equivalent of a lost Beatles album recorded in between Revolver and Sgt Pepper.

In 1963 Trane was a jazz superstar: highly respected among critics and his peers, while enjoying commercial success with his soprano-fueled recording of “My Favorite Things.” Impulse Records was eager to maintain his commercial viability, while still allowing Trane to continue expanding his artistic boundaries. But as his popularity soared, his previous record labels — Prestige and Atlantic — flooded the marketplace with their own years-old Trane recordings that were out of date with his forward-thinking innovations. Trane and Impulse needed to work quickly and strategically to stay ahead, and so began a flurry of exploratory activity. The music on Both Directions at Once was recorded during a five-hour session at Rudy Van Gelder’s legendary studio in Englewood Cliffs, New Jersey on the afternoon of Mar. 6, 1963; that night the group drove to Manhattan to play the final gig of a two-week run at Birdland, and the next morning they were back at Van Gelder’s for the session that produced the seminal John Coltrane and Johnny Hartman album.

Fortunately, the John Coltrane Quartet was one of the strongest, most malleable bands in the history of jazz. Both Directions at Once is just that: the quartet in their prime, solidly in the pocket of traditionally hard-swinging bebop, while further exploring the wider, expansive approach to improvisation that would come to redefine jazz for generations to come. The album opens with “Untitled Original 11383,” a fierce uptempo minor blues with a striking and chromatic melody; it should have been a Trane standard like “Naima” or “Giant Steps,” covered by countless jazz artists and woodshedded by aspiring musicians in practice rooms worldwide. On “Untitled Original 11386” Trane and his soprano waste no time reaching for the stars, but just as he leaves the earth’s atmosphere pianist Tyner stops playing and leaves Trane to float through the cosmos on his own for a while! The interplay between Trane and Tyner is especially compelling on this set; more than once he lays out to allow the saxophonist to “stroll,” but for the most part he provides Trane with a gorgeous harmonic net to fall into and/or bounce off of. (Sonny Rollins, himself a master proponent of the piano-less “strolling” technique, aptly compares hearing Both Directions at Once to “finding a new room in the great pyramid.”) Trane also “strolls” through the first half of “Slow Blues,” with Garrison and Jones providing a persistent soft pulse underneath that gives the impression of Trane tap dancing on the surface of the moon. Tyner then enters with his own soulful solo to keep the group from burning up on reentry, before Trane returns to lead the whole band through a double-time victory lap.

Adding to the mystery of this music is the fact that it survived at all. The master tapes having been destroyed years ago, the audio comes from a 1/4 inch mono “reference” tape taken home by Trane at the end of the session. Despite being a rough mix never intended for release, it is surprisingly present and full-sounding. Trane’s tenor and soprano leap out of the speakers, Garrison’s bass and Jones’ thundering drums fill the room and there’s plenty of sparkle from Jones’ cymbals and Tyner’s piano, all in glorious mono. Ashley Kahn’s liner notes augment this astounding set with detailed historical context, and the deluxe edition contains a second disc of extra outtakes that further complete the compelling story of this work. The lingering questions as to why this music was put away and never released are to be answered elsewhere, but the seeds that Trane and the band planted that afternoon in 1963 would be in bloom less than two years later on A Love Supreme. (You do own a copy of Love Supreme, don’t you? Because I can’t be your friend if you don’t.) Both Directions at Once: The Lost Album is the urgent sound of a visionary musician boldly taking huge strides into the unknown, but confident that he’ll know what to do when he gets there. Whether you’re a frequent guest or a new visitor to the great pyramid of John Coltrane, you’d do well to step into this new room.

0 comments on “Lost John Coltrane Album Is a Fiery Revelation”