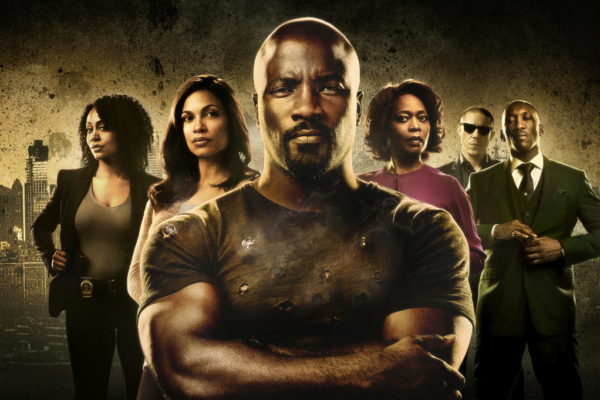 We understand that some of the recent comic book movies have not been “all that” but that’s no excuse for not watching the new superhero series that recently maxed out the internet. What show is that you ask? No, it’s not Legends of Tomorrow or Supergirl or Jessica Jones. It’s Luke Cage, the latest cultural phenomenon to emerge from the Marvel Universe. The anticipation for Luke Cage has been great and fans were hardly disappointed with the final result when it showed up on Netflix at the end of September because it delivered exactly what every comic book geek wants from a live-action series: a strong story, believably complex characters, and plenty of action. Even more remarkable perhaps was that, in the same year when #OscarsSoWhite trended as a hashtag, this Netflix newbie defied prevalent Hollywood logic by achieving a quick and decisive success without having a white male lead (or even a sidekick).

Instead, its eponymous protagonist Luke (Mike Colter) is a well-spoken, intellectually curious black man with brains that match his brawn. His “Alfred,” to speak in Batman terms, is Pops (Frankie Faison), also black and gifted with an elder’s worldly wisdom without falling into the typical “mystical negro” stereotype. Indeed, as a former street gang member, Pops is far from “pure” as he’s revealed at one point to have several mistresses. With whitewashing still an ongoing issue (Ghost in the Shell with Scarlett Johansson; Tilda Swinton in Doctor Strange) and buzzy TV pilots that rely on painful stereotypes (NBC’s mercifully nixed Mail Order Bride), the atypical casting and premise of Luke Cage is a welcome and wonderful thing.

And it’s not just the male leads who captivate us as viewers. Luke Cage‘s villains especially also make for engaging viewing. The excellent Alfre Woodard and Mahershala Ali excel as Councilwoman Mariah Dillard and Cottonmouth respectively, two cousins committed to making their old neighborhood great again at any cost. Their relationship is like something out of The Godfather –a great familial love troubled by a diabolical history that only gets richer as the story progresses. Just when you’re about to write off a character as one-sided, their stories go deeper and the motives get more complicated. Even smaller roles feel very much grounded in NYC realness. Cottonmouth’s henchman Zip (Jaiden Kaine) sneers at Jin (Clem Cheung), “You’ve been in this country how long and you don’t speak English?” Jin snaps back, “My English is just FINE!” And he’s right. This New York is a multicultural city where people of color don’t automatically come with foreign accents. Here’s to coming a long way since a Mickey Rooney in yellowface was shrieking in broken English in Breakfast at Tiffany’s.

Yet if it were just about representation, Luke Cage would hardly be the phenomenon it is. While you might not know it from a show like Lois & Clark, let’s say, comic books have evolved as one of the richest sources for TV and movies ever since their creators stopped underestimating the intelligence of their readers. After awhile the critics and TV producers took notice. Do you think it’s a coincidence that the most popular show on TV is The Walking Dead? That’s something the folks at Netflix noted too. They were smart and Luke Cage does not dumb it down.

0 comments on “Luke Cage Is an Absolute Marvel”