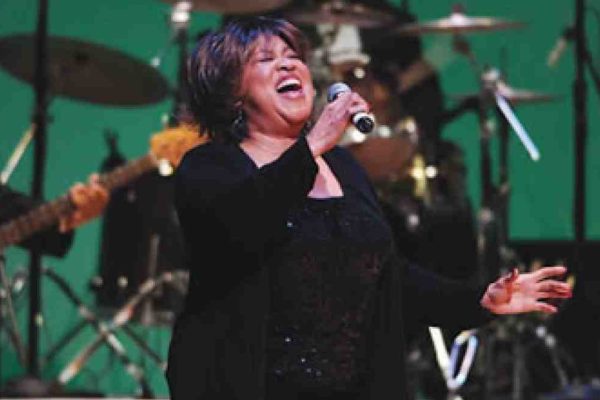 She has one of the most expressive voices ever recorded. She played in a band with her dad for most of her life, fusing gospel, blues and soul into their own unique hybrid. They advanced the cause of civil rights in subtle and profound ways. Oh, and Bob Dylan wanted to marry her. Suffice to say Mavis Staples is having one remarkable career – and she’s still going strong. A new documentary shines a light on this truly remarkable artist. Most of us know Mavis from her ’70s-era hits with The Staples Singers, like I’ll Take You There and Respect Yourself, but the story starts long before and continues long after. The HBO documentary Mavis! does an excellent job tracing the arc of her career, which began in Chicago, surrounded by neighbors like Sam Cooke, Mahalia Jackson, Lou Rawls, and Curtis Mayfield.

Surrounded by music, and church, it’s no surprise that her father, the transcendent musician Roebuck “Pops” Staples, would form a family gospel band. It’s also no surprise that the band totally rocked the South Side. And that’s where things get interesting.

Pops, a wonderful blues guitarist (with a trademark tremolo-drenched tone), hit upon a particular marriage of blues, gospel and soul. While never losing touch with its spiritual side, the band crossed over and became, dare we say, staples on jukeboxes across the country. After Pops met Martin Luther King, the band engaged fully in the struggle for civil rights, with Pop’s Freedom Highway becoming an important part of that soundtrack.

While various family members cycled in and out of the band, Mavis was the cornerstone. Her distinctively deep, pliant, expressive voice anchors decades of recordings. (We particularly love the set piece from The Last Waltz, which shows how easily Mavis made folk and rock totally her own.)

Speaking of decades, Mavis kept at it, cresting first in the ’70s with those huge crossover hits, and plowing ahead ever since, recording with Prince in the 80’s; entering the Rock and Roll Hall of fame in the ’90s; mounting a “comeback” with Wilco’s Jeff Tweedy in 2009 and winning a Grammy in 2010.

Through it all, it seems she’s never lost a sense of her true self. She projects strength, humility, compassion and a restless creative spirit throughout. Her fans — including Bob Dylan, Prince, Bonnie Raitt, Levon Helm, Jeff Tweedy and Chuck D — are more than happy to sing her praises throughout the film.

And, at the risk of putting too fine a point on it, her affirmative, open-hearted message is particularly timely. You can’t help but feel at least a little better after seeing this film.