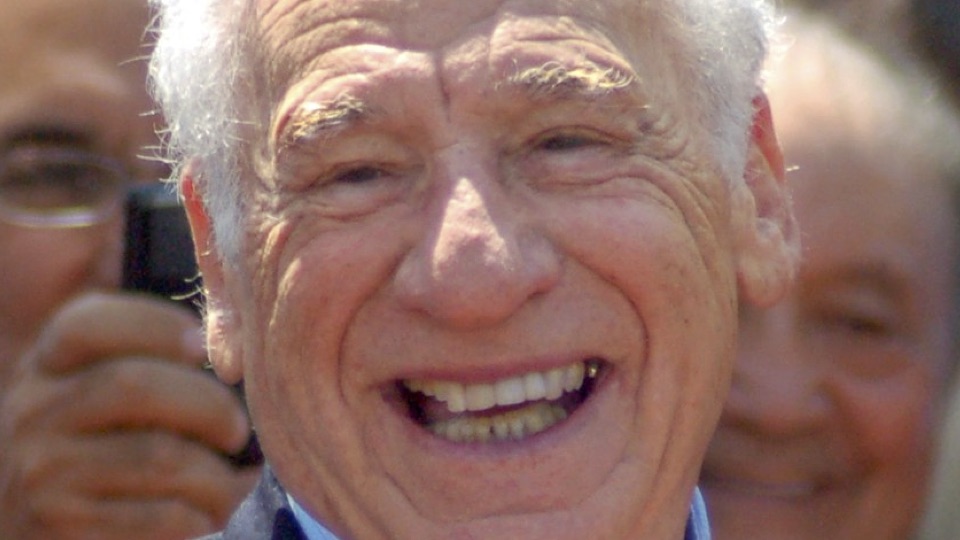 According to Mel Brooks, he’s always been funny. He remembers ribbing camp counselors when he was six years old, earning himself a slap, but more importantly, earning chuckles from fellow campers. He also recalls regularly reducing his best friend to fits of hysterics by singing “Puttin’ on the Ritz” as Boris Karloff and during the summers raking in laughs doing impressions for guests at the Borscht Belt resorts.

But whether it was drastic historical events, anxiety, or the fear of failure, things always threatened to get in the way of the boy from Brooklyn becoming a star. Luckily, however, Brooks’s dream was so strong that he persevered to have a more than seven-decades-long career, which is chronicled in his memoir All About Me!: My Remarkable Life in Show Business.

Released this past November, the 450-page book is a wide-ranging look at the many shows and films Brooks has written, produced, and directed over the years, with plenty of personal anecdotes peppered throughout.

Writing for the most part chronologically, Brooks’ first few chapters focus on his early life in Brooklyn and not only how it shaped his “New York” brand of comedy, but how growing up during the Great Depression with three older brothers and a widowed mother could’ve very easily derailed his path to becoming a comedian. He might’ve become an aviation mechanic if his oldest brother, Irving, recognizing Mel’s knack for comedy, hadn’t ripped up the application and thrown it in the trash. “[Mel’s] different. He has something…He’s not going to be an aviation mechanic. He’s going to college,” Irving Kaminsky told their mother. (Everyone say, “Thank you, Irving Kaminsky”).

Brooks also details his time in the Army during World War II as a combat engineer working to safely unearth landmines and clear booby traps and how, once the war was over, he joined a Special Services unit as a comic in a variety show that toured different Army camps. Even in the direst of circumstances, he cares about making people laugh.

In the later chapters, he takes his career a project at a time, devoting a large chunk to his time as a writer for Sid Caesar on Your Show of Shows. He describes an often-volatile writers’ room—screaming, pencils being thrown, Caesar punching the wall so often “it was bent”—because the writers were passionate about what they did and felt the overwhelming need to be outstanding. The fear of not being able to come up with enough material took a toll on Brooks who started to experience anxiety attacks, throwing up in the parking lot, and needing to attend therapy on and off for three years.

Although the book is mainly a surface-level recounting of how each project came to be and it doesn’t delve deep into Brooks’s personal life, moments like these when he’s vulnerable with his audience do appear. Another example comes when he was drafting the screenplay for The Producers and had the title of the song “Springtime for Hitler,” but thought he needed someone else to write the lyrics. The same fear crept in 34 years later when he was tasked with writing the score for the Broadway adaption of the film; he didn’t know if he’d be able do it. Both times, his beloved wife, actress Anne Bancroft, assured him he could do it, and he was meant to do it.

It’s personal details like these that readers can relate to and say, “Even one of the most accomplished filmmakers in history has struggled with self-doubt.”

Of course, the other major achievements in the life of Mel Brooks receive their own dedications as well. There’s the story of how he and Carl Reiner came up with the idea for “The 2000 Year Old Man” while on a lunch break. There’s his directorial debut, The Producers, and how he filmed commercials for Frito-Lay to gain experience before hopping behind the camera. He touches on 1974, the year that both Blazing Saddles and Young Frankenstein were released, and how for the former he offered John Wayne the part that would end up going to Gene Wilder. (Wayne thanked him, but said the script was too dirty).

The idea for Young Frankenstein came from Wilder, who, after developing the storyline with Brooks, wrote it all down in pencil on legal pads. The only fight Brooks and Wilder had while making the film was over the inclusion of the scene where Dr. Frankenstein and the monster perform “Puttin’ on the Ritz.” It was Wilder’s idea and obviously a good one, so Brooks says he’s glad he relented.

Towards the book’s closing, Brooks would be remiss if he didn’t discuss The Producers on Broadway, a comeback that earned him 12 Tony Awards, the most ever won by a musical in history, and a full-circle moment for his lifelong love affair with Broadway.

As expected, the comedy icon imbues each chapter with his trademark humor, the cause for a laugh-out-loud reading experience. He’s not always humble about his accomplishments (he’s Mel Brooks, he doesn’t have to be), but he constantly heaps praise on all the actors, writers, directors, crew, and producers who’ve had an impact on him and helped make his career possible.

The book’s also an insight into the creative mind of an ardent student of cinema, one who just flips that cinema on its head. He details the choice to employ Hitchcockian tropes in his parody High Anxiety, and why he kept scenes where the camera shakes in Young Frankenstein to mimic the James Whale films he was drawing inspiration from.

This isn’t to say he doesn’t expound upon his own vast industry knowledge. To preserve the longevity of a comedy, he writes, “there’s a secret you must follow: you have to have an engine driving it. In Blazing Saddles, there’s a very serious backstory. Racial prejudice is the engine that really drives the film and helps make it work.”

While die-hard Brooks fans might not learn much that they didn’t already know about the comedy legend in All About Me!, the memoir’s still a valuable addition to any Brooks lover’s collection as it chronicles his entire illustrious career in one place.

And from being the creator of some of the most revered comedies ever, to winning numerous awards—including achieving EGOT status—Brooks has been handsomely lauded for his contributions to the art canon. But from reading the book, one gets the sense that even at 95, in his heart he’s still that little kid from Brooklyn who wants to make people laugh. Because even with all the hardships he’s endured, including now outliving many of his friends, loved ones, and peers that he graciously thanks in this book, he has found the key to helping both himself and others get through anything life throws at them. “Comedy is a very powerful component of life. It has the most to say about the human condition because if you laugh you can get by. You can struggle when things are bad if you have a sense of humor,” he says. “Laughter is a protest scream against death, against the long goodbye. It’s a defense against unhappiness and depression.”

0 comments on “Mel Brooks: A Life of Laughter”