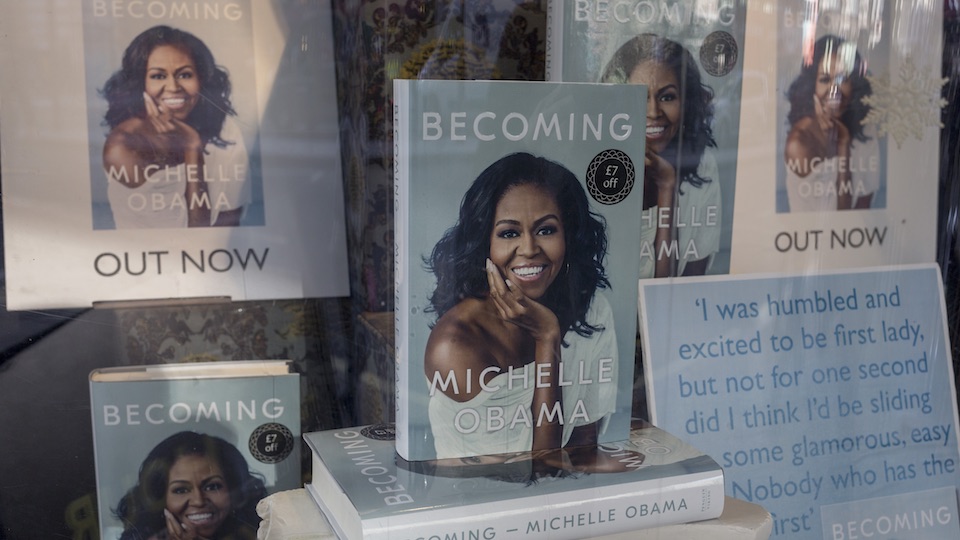 The first thing to know if you’re thinking about reading Michelle Obama’s Becoming is that you shouldn’t let its bulky, doorstop appearance deter you. I reserved it at my library when I had more time to read than I do now. When it became available two months later, I thought I’d read the preface and dip into it here and there. But that’s not what happened.

Her story is so rich, and the writing so heartfelt, she draws you in and you don’t want to leave. I think I read the four-hundred twenty-eight book over four days. I slowed down as I got towards the end and savored the last few sections. Like many other readers have said, I didn’t want the book to end. I wanted to spend more time with her.

Unlike autobiographers who offer a sequence of events but little reflection along the way, Michelle is deeply introspective and the writing is journal-like at times. By sharing her decision-making processes and her thoughtful evaluations of the outcomes of those decisions, we see how her mind – and heart – work.

Related: “Walk the Walk, Sing the Song, Write the Book”

Her voice comes through clearly, with honesty, integrity, wisdom, humor, and the self-doubt that plagues so many women in their personal and professional lives. “Am I good enough?” she often wondered. That question is more complicated for women of color, and she shows us the moments that brought her to the understanding that “good enough” had to be better.

Becoming is so much more than an autobiography. It’s a love story that models what a successful marriage looks like in the twenty-first century. Michelle never claims to be offering advice and there’s absolutely no preachy vibe. Yet her wisdom permeates every anecdote and every vignette. Michelle and Barack’s unlikely story, filled with serendipity yet often seeming destined, exemplifies two people in love, living as a team, with values and goals in alignment, committed to bringing out the best in each other.

Michelle, like many women before her and since, made compromises for her husband’s career, some of which required a bit of mental gymnastics. But her love for Barack and her verified belief in his power to do so much good tempered the feelings of resentment that brought them to couples therapy. Her expectations about that first therapy session will resonate with the millions of couples who’ve been through it.

Becoming is also implicitly a parenting manual. With profound common sense – and again, no preachiness – she shows the outcome of conscientious parenting across two generations. She shares vivid memories of her childhood and adolescence, showing how her loving parents and ever-present extended family gave her confidence and a strong sense of self.

She shows readers the inner workings of a black middle-class family and shatters lingering stereotypes along the way. Discrimination limited the opportunities of grandparents and other and family members. But her parents worked to create every possible opportunity for their children, instilling the drive to seize those opportunities and give their all.

Becoming also a story about race in America, and ever-present feelings of otherness. When the guidance counselor at her magnet school for high achievers (where she met and became lifelong friends with Jesse Jackson’s daughter Santita) told her she’d never get into Princeton, she had an epiphany.

The Robinsons’ daughter was not going to allow anyone to limit her horizons and she became even more determined to follow her brother to Princeton. The unique blend of fortitude, grace, and sense of purpose she displayed on the world stage for a decade was already part of who she was back in high school.

Becoming is also about the American Dream. Having never stepped foot on a college campus before, she arrived at Princeton and continued to wonder if she was good enough. Her overwhelmingly white classmates drove cars and lived in homes even more grand than those her family admired on their out-of-neighborhood drives in her Dad’s beloved Buick while she sat in the back taking it all in.

After years of commitment, hard work and focus, she was a young lawyer, making enough money to, what the hell, buy a Saab. She expresses pride in her accomplishments and gratitude for her opportunities. But she soon realized she needed work that could make a positive difference in people’s lives. Barack showed up for an internship at her law firm and, literally and metaphorically, spoke to this need in her.

Once at the White House, her story becomes a primer on how to deal with haters and others who want to see you fail. A garden? Initiatives to address childhood obesity? Bare arms? How dare she! We saw all this from the outside, but here she lets us in to see from the inside how she found her groove as First Lady.

It’s no surprise that readers didn’t want the book to end. We know what happened after. Spending time with Michelle is a sweet, uplifting break from the chaos that has erupted since.

Photo Credit: A display of books in the window of Waterstones in Piccadilly, for ‘Becoming’ by the former First Lady of the United States, Michelle Obama, before her December publicity tour of the UK, on 13th November 2018, in London, England. (Photo by Richard Baker / In Pictures via Getty Images)