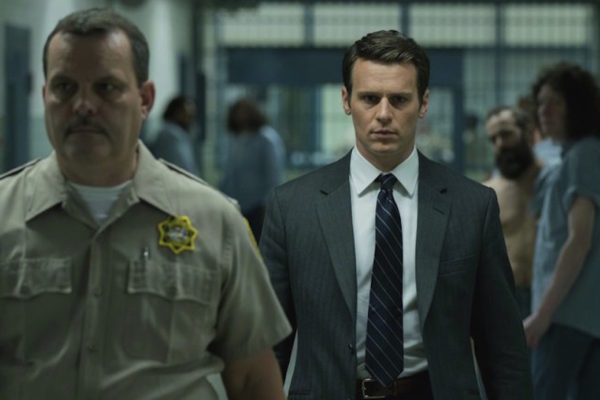 Ages ago, back in the 1970s, the FBI had a reputation for being a “just the facts, ma’am” type of organization. Dressed in dark suits with simple ties, agents then had an air of cold professionalism, so when they showed up at a crime scene, you knew things were going down. Yet while J. Edgar Hoover’s investigative team proved very good at “finding their man,” men like Charles Manson, co-ed killer Edmund Kemper and townhouse massacre’s Richard Speck committed such shocking violently crimes that the agency turned its attention to identifying potential murderers as a form of prevention.

MindHunter, based on the best-selling 1995 true-crime book by John E. Douglas and Mark Olshaker, is the story of Holden Ford (Jonathan Groff), a young FBI agent whose primary job is teaching agents how to handle dangerous hostage situations. After an initial negotiation goes terribly wrong, Holden begins pondering what drives some men to go off the rails. Soon enough, Ford’s teaching cohort Bill Tench (Holt McCallany) has him including his newly gathered insights as part of their cross-country FBI hostage-management classes. As part of their research, the two begin interviewing notable killers at prisons along their teaching routes.

Increasingly enlightened, Ford and Tench are able to solve certain crimes based on what they’re learning. Their boss (Cotter Smith) may initially scoff at their efforts, but eventually he provides them a basement office and a modicum of moral support. Eventually, the group grows to include psych professor Wendy Carr (Anna Torv) and another agent, Gregg Smith (Joe Tuttle).

The series’ most compelling episodes are those in which Ford and Tench interview the convicted killers. The almost-calm, jarringly whimsical way some describe their crimes is both entertaining and unsettling. Some may be in denial; some may be insane; but all will give you the willies. To make things creepier, the dialogue during these sessions is taken from actual transcripts. And so we watch the FBI’s questioning techniques improve. Their methods are different — Carr wants structure, Ford less so – but their objectives are the same.

To its credit, most of the series focuses on the techniques that are developed on-the-fly and the resulting friction. Dr. Carr is pushing to develop a reproducible process which creates tensions for a team impatient to get to the core of these twisted psyches. Additionally, the intensity of their encounters is affecting the personal lives of the FBI participants, in particular Ford, whose relationship with his girlfriend (Hanna Gross) is impacted by the unrelenting misogyny to which he’s exposed. To be clear, this show’s first season is very much about violence against women, often rooted in each killer’s disturbing relationship with his mother.

For this reason among others, the show can often make for uncomfortable viewing. Yet why shouldn’t a show unsettle you? Mindhunter has already been renewed for a second season, so clearly people are not only watching but some are hooked. Guilty as charged.

PS. Some other true crime shows worth checking out.  Plus, Jack the Ripper is perhaps the most famous serial killer — and he’s inspired a ton of musicians.