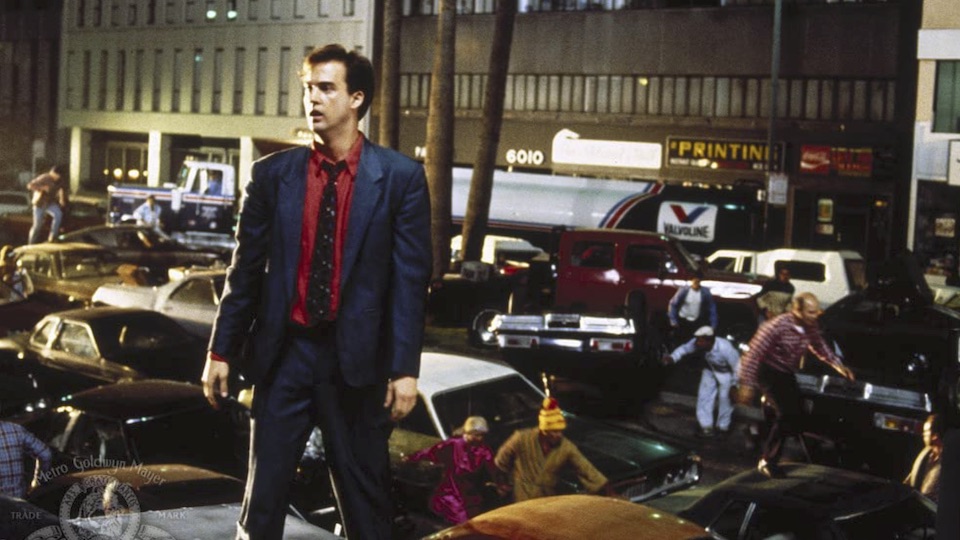 In the movies and on TV, there are many obstacles that get in the way of true love. But it’s not too often that what prevents a couple from getting together is an impending nuclear apocalypse. That’s the premise of Miracle Mile, an offbeat 1988 film where a budding romance is complicated by the End of The World. Anthony Edwards stars as Harry, a Los Angeles-based musician, who meets Julie (Mare Winningham) while visiting the La Brea Tar Pits. In true romantic drama/comedy fashion, the pair quickly hit it off and end up spending the afternoon together. Harry is smitten, and the couple makes a plan to get together later that evening, after the end of Julie’s shift at a local diner. Fate intervenes when a power failure in Harry’s building causes him to oversleep, and he misses their date. By the time he gets to the diner, Julie’s left for the night. She’s under the impression that Harry stood her up.

Harry goes outside to use the payphone (it is the 1980s, after all) and tries to reach Julie, but ends up leaving her a message. As he walks away from the phone, it rings and he picks it up. A frenzied voice at the other end believes that he’s reached his Dad. It turns out the caller works at a military base and is trying to warn his family about an imminent nuclear attack. Before Harry can confirm the caller’s story, he hears gunshots and another voice saying “Forget what you just heard” just before the line goes dead. When a shaken Harry goes back inside the diner and tells everyone what just happened, the reaction of the staff and customers ranges from those who think he’s crazy to others who take him seriously. If what Harry just heard is true, they’ve got very little time to get out of the area. One of the customers is a stock trader, and using her connections, makes some calls. She confirms that something is indeed going on, and everyone is in danger.

The people at the diner band together in order to flee the city, but Harry decides he needs to stay behind, find Julie and get her to safety. Thus begins a frenzied odyssey through the night-time world of Los Angeles as he tries to locate her before time runs out. Miracle Mile is a unique combination of genres. The movie begins as a 1980s “meet cute’ love story, then morphs into a doomsday tale, with elements of a disaster film, action movie, and paranoid thriller along the way. Writer Steven De Jarnatt’s script had been making the rounds in Hollywood circles for years and was a hot property. At one point, it was being developed at Warner Brothers as the basis for Twilight Zone: The Movie. That version of the film never happened, because De Jarnatt balked at changing the story’s ending, and compromising his vision for the movie. He bought back the rights to his script, and Hemdale Films eventually picked up the project, with De Jarnatt onboard as writer and director.

The cool visual style of the film comes courtesy of cinematographer Theo van de Sande, who effectively captures the neon-lit feel of the night-time world of Los Angeles. His excellent work is enhanced by the moody score for the movie, provided by Tangerine Dream. The cast is excellent across the board. Anthony Edwards and Mare Winningham make an appealing couple, and the talented roster of supporting players includes familiar faces such as Denise Crosby, Kurt Fuller, Mykelti Williamson, and Danny De La Paz. The scenes set in the diner evoke the feel of a one-act play. I spoke to Denise Crosby about the film several years ago, and she shared with me that the cast was able to rehearse those scenes before production, which adds to their natural vibe.

De Jarnatt’s strong direction and the appealing characters in this intriguing, genre-hopping story are at the heart of Miracle Mile. There’s a sense of escalating tension and impending doom throughout the film, as Harry tries to rescue his new love before the end of the world. Miracle Mile is one of those under-the-radar movies which has a small but devoted following, most of whom (like myself) caught it during its many airings on cable television back in the 1990s. The film’s unique combination of genres might surprise first-time viewers. If you’re looking for a typical 1980s love story, this is probably not the movie for you. But if you’re open to a little something different in your movie diet, Miracle Mile is a memorable film that will stick with you long after its bleak 1970s style ending.

6 comments on ““Miracle Mile”: An 80s Cult Movie Worth Revisiting”