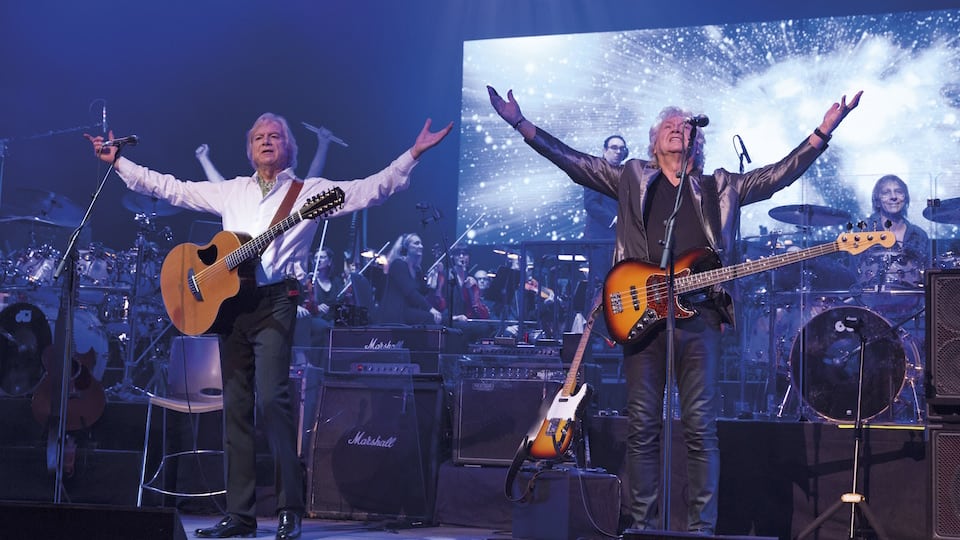 In 2017, The Moody Blues embarked on a summer-long tour to mark the 50th anniversary of their landmark LP Days of Future Passed, during which the venerable English band performed their groundbreaking concept album in its entirety. Eagle Rock Entertainment has documented the show on the recently-released Days of Future Passed Live (DVD, Blu-Ray, and 2CD). It captures The Moodies delivering their timeless music while accompanied by a full orchestra at Toronto’s Sony Centre for The Performing Arts.

The current core Moodies — drummer Graeme Edge, bassist John Lodge and guitarist Justin Hayward — are in their 70s yet still in fine form. Edge, the band’s eldest and sole original member, is particularly fun to watch. He clearly savors his role as the cornerstone of one of the greatest rock bands in history. Hayward’s and Lodge’s voices have mellowed nicely with age, and with few exceptions, they sing these songs in their original keys. The principals are backed by an excellent touring band of drummer Billy Ashbaugh, keyboardist Alan Hewitt, and multi-instrumentalists Norda Mullen and Julie Ragins.

But the star of this show is the music itself. The Moody Blues’ unique blend of romantic harmonies and melodies, warm textures, and lush orchestrations is the link connecting the early ‘60s English “beat groups” (Beatles, Hollies, Kinks), the heady psychedelic Pink Floyd, and the expansive orchestral grandeur of ELO. It’s magical to hear these songs in the present day; they sound and feel as fresh as ever, illustrating why The Moody Blues have endured for five decades.

Days of Future Passed Live looks spectacular as well, beautifully filmed and edited. Besides showcasing the band, director David Barnard captured the show’s tasteful lighting design and rear-projected visuals in a way that perfectly complements the music. The orchestra joining them for the full-length DOFP is an exhilarating addition to an already excellent program.

The DVD also contains a bonus featurette, in which Edge, Hayward, and Lodge share recollections about the making of the album. Their memories are sharp and evocative of a crucial moment in the band’s history. Days of Future Passed Live is a must-have for any die-hard Moody Blues fan and a great starting point for anyone discovering them for the first time.