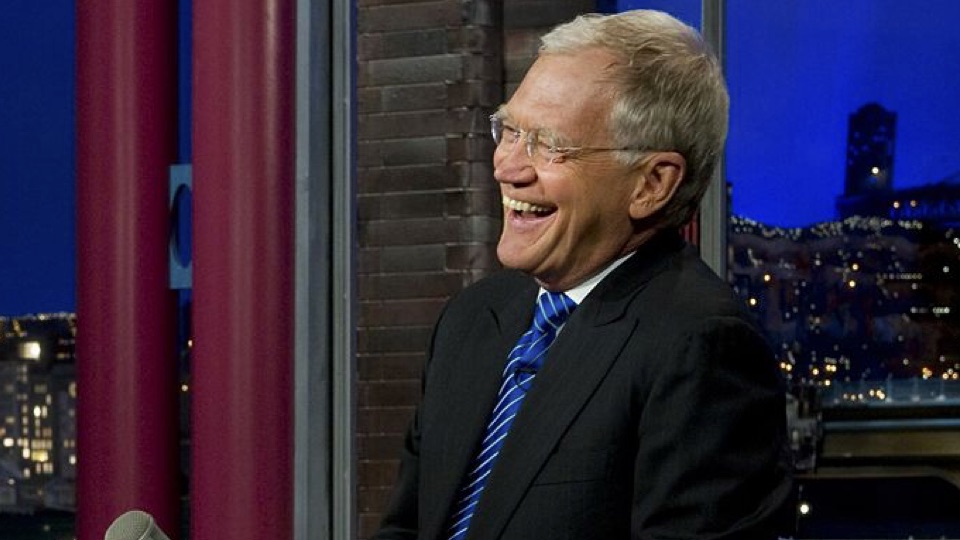 If you’re of a certain age, the only late-night host that matters is David Letterman. Forget Jay Leno, Johnny Carson – and those short-timers Chevy Chase, Pat Sajak – even Arsenio Hall. No one did late (and late late) night like Letterman.  And though he retired from the nightly circuit in May 2015, he’s continued to turn his interviewing skills into quality entertainment.

Letterman began on-air as a weatherman in Indianapolis, which he turned into a platform for his zany humor including predicting hail as large as “canned hams” and describing weather in fictitious cities. Soon enough, his then-wife convinced him to move to Los Angeles and try his hand as a comedy writer. He was able to land a number of gigs writing for otherwise short-term shows and appearing on various sitcoms (Mork and Mindy), variety shows (The Mary Tyler Moore Variety Show) and a number of game shows (The Gong Show, Hollywood Squares, and others).

After appearing as a stand-up comedian guest a few times on the Tonight Show with Johnny Carson, he was asked by Johnny to guest host. Ultimately, he became Carson’s favorite guest substitute host. Letterman was given a very short-lived morning show where he cultivated some skits and segments that would later appear on his late-night show. But while he won two Emmy’s, the morning show canceled after just three months.   After more guest hosting, Letterman was finally given his own show that aired starting February 1982 on NBC at 12:30 am right after The Tonight Show. His show included an outrageously talented group of musicians, nicknamed “The World’s Most Dangerous Band” (Paul Shaffer, Sid McGinnis, Will Lee, and Anton Fig) and became famous for Top Ten Lists, Stupid Human Tricks, and a Monkey Cam. His head writer Chris Elliott played numerous ad hoc characters including a variety of “guys” such as “The Conspiracy Guy”, “The Fugitive Guy”, and the “Guy Under the Seats”. And let’s not forget Larry “Bud” Melman. Along the way, his viewership continued to grow.

When Johnny decided on retiring inn 1992, most figured that Letterman would be his replacement. In fact, Letterman and Carson had grown close, and David had expressed a strong interest in being on-air earlier than his Late Night show. Plenty of books and TV shows explored what happened next, namely that Jay Leno was selected over Letterman. Letterman was crushed.

CBS immediately courted Letterman, offering him a premium salary and him his own show that would air at 11:30 am opposite of Leno’s Tonight Show. Upon Carson’s personal urging, Letterman accepted, essentially competing with Leno’s Tonight Show. Initially Letterman lead in ratings but Leno took over the lead after an infamous Hugh Grant interview. Nonetheless, Letterman had a strong following and a unique style. Over the course of his show, the show was nominated for 67 Emmy’s, winning 12 times.   He renewed his contract with CBS after passing up an offer from ABC to replace Ted Koppel on Nightline and continued to host Late Night until his retirement on May 20, 2015.

In 2012, Letterman was awarded a Kennedy Center Honor as “one of the most influential personalities in the history of television, entertaining an entire generation of late-night viewers with his unconventional wit and charm.” In 2017, he was awarded the “Mark Twain Prize for American Humor.”

Since retiring, along with announced appearances, he accepted a position as a correspondent on the climate change documentary Years of Living Dangerously, gave a moving induction speech for Pearl Jam’s induction into the Rock and Roll Hall of Fame (Letterman and Vetter are close friends), and along with Alec Baldwin introduced a series of movies on Turner Classic Movies.

His latest gig is on Netflix and has gained significant attention, titled My Next Guest Needs No Introduction. The format involves Letterman sitting across from his guest, interacting and interviewing using his biting and obligatory self-deprecating humor. The guest list for the show includes such notables as Barack Obama, Malala Yousafzai, Howard Stern and Melinda Gates. During various episodes, Letterman walked across the bridge in Selma while discussing civil rights with Congressman John Lewis.   He parked and watched planes landing at LAX with Clooney while snacking on fast food, and ate fried chicken with musician Buddy Guy. It’s definitely entertaining – and reassuring that Letterman still has his quick wit and warm compassion.

So the good news for us is that unlike Carson, who retired and never had another stint, Letterman continues to find ways to entertain us in his inimitable and quirky ways.

1 comment on “My Next Guest Needs No Introduction, Because It’s David Letterman”