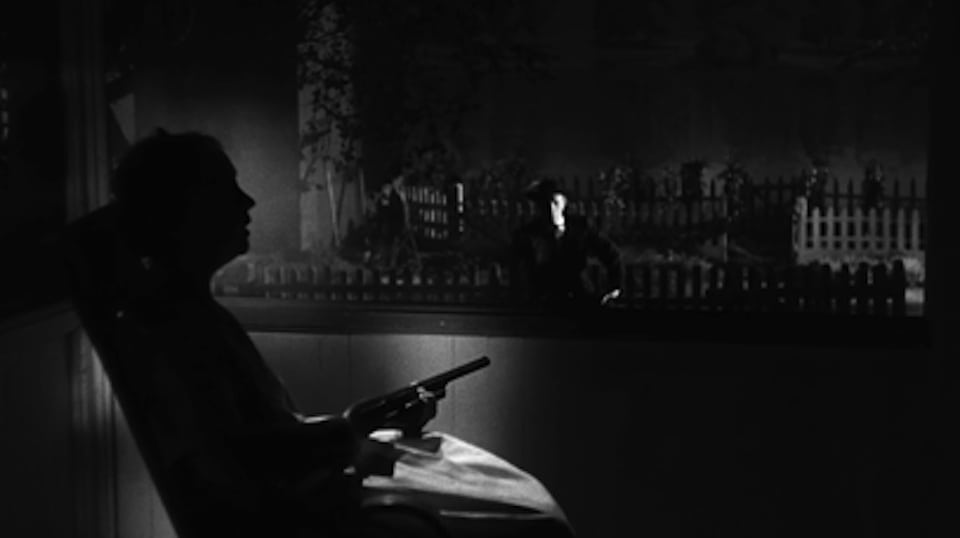 The other night, TCM was playing one of my newly-discovered favorite movies again. And if you haven’t discovered it, you need to.

The Night of the Hunter (1955) was the one and only directorial effort by actor Charles Laughton. And it remains one of the great nightmarish films, the kind that somehow burrows into the back of your brain and calls up every fear you ever had as a kid.

The plot centers around a phony (and murderous) preacher, “Harry Powell,” played with horrific glee by Robert Mitchum (he seemed to specialize in creepy wackos during that period, going on to play “Max Cady” in Cape Fear a few years later).

While doing a stint in prison, he learns that his cellmate Ben Harper (Peter Graves) has stashed a wad of money stolen in a bank heist. He sets out on a single-minded mission to find it.

His journey takes him to Harper’s widow (a young, pretty, pre-Poseidon Adventure Shelley Winters) and her two children. Right off the bat, young John Harper smells a rat and is determined to keep his father’s secret as to where the money is hidden.

The conflict between John and Harry escalates, but no one can see what the young boy sees behind Powell’s phony piety (Mitchum famously wears the words “love” and “hate” tattooed across his knuckles). The adults in John’s world are blind to the danger that he knows is there, and as a kid, he’s powerless. The frustration is palpable.

Ultimately, John and his (annoying) little sister Pearl make an escape – and the sequence is one of the most visually stunning things ever filmed. Floating in a boat down a river at night, creatures stalk them from the shore – much as Harry stalks them.

The children are finally rescued by feisty widow “Rachel Cooper” who takes in stray or unwanted children. Lillian Gish plays this role; even at 62, she has lost none of the luminous qualities that made her a huge silent film star.

Even with her strict, no-nonsense ways, Rachel is the only adult who understands and believes John’s story about Powell. When the phony preacher comes a-calling, she stands guard with a shotgun. As to the rest? You’ll have to watch for yourself.

The Night of the Hunter is not technically a horror movie; it leans more towards film noir. But watching two children trying to get away from a literal monster, as the adults who are supposed to protect them befriend that monster – well, who hasn’t had that kind of nightmare?

When it was released, the movie was a critical and commercial flop; Laughton never directed another one. Over the years, there’s been a greater appreciation for its stunning visual style; Mitchum also said that it was his favorite project.

So if you’ve yet to see The Night of the Hunter, put it on your list. But you might want to leave the lights on when you watch it.

Photo Credit: Fair use image of The Night of the Hunter

0 comments on “An Underappreciated Nightmare: The Night of the Hunter”