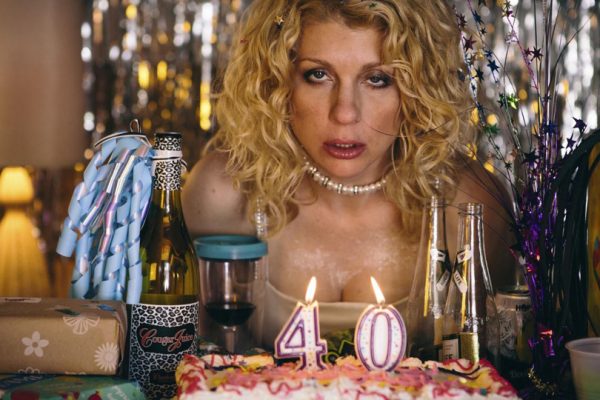 Somebody, somewhere once said that humans are meant to go through life two-by-two. That may or may not be true; but finding a partner – for life or even sometimes a lot less – sure does take up a lot of our time. So let’s talk today about an unusual film, and an edgy web series, that each has a very particular take on … coupling. You can either read on or hear all about it in our weekly radio segment.

Those of you with a sense of cinematic adventure have probably heard about The Lobster, even if it hasn’t made it to your local arthouse theatre yet. After scoring, big-time, at May’s Cannes Film Festival, the film’s been steadily building momentum — and shows no signs of slowing down.

It’s been particularly popular among Gen X-ers, and once you hear a bit more, you’ll understand why.

First off there’s the drawing power of The Lobster’s two leads – Colin Farrell and Rachel Weisz – who can be seen on alternate posters, each embracing a blank space shaped like the other. The posters call it an “an unconventional love story,” which is definitely the case.

The premise is that we’re now living in a world where every citizen must take a hard line on their relationship status. (Facebook update, anyone?) Either you’re a member of a couple, linked by particular physical traits like a lisp, great hair, or a tendency toward nosebleeds, or you’re a “loner,” rejected from society and left to scrape out an existence on the fringe.

When we meet the near-sighted David, played by Farrell, he’s being rejected by his similarly short-sighted wife, who’s leaving him for another short-sighted man. In order to find a new partner, David checks into a matchmaking hotel where guests are given 45 days to find a suitable mate. Those who don’t are turned into an animal. Just to be sure we don’t miss the point, David is accompanied by his dog — who is actually his brother who was unable to complete the program.

Outlandish facts like these are presented simply, casually; as if they’re no big deal. So the question is — how far would you go to find a mate if your life depended on it? For example, a Limping Man bashes his own face to court Nosebleed Woman. The other examples are a bit too PG-13 to mention here.

Sure, this can all be kinda depressing. But our reviewer, Alexis Rhiannon, also found herself laughing out loud – mostly because it really is a dark comedy.

As odd – ok, weird – as it can be, The Lobster has earned its attention. It’s inventive, tragic, comic and totally thought provoking. If you’ve ever felt the pressure to pair off, this will definitely strike a chord.

On the other end of the spectrum is the new web series, The Benefits of Gusbandry. It’s somewhere between a totally updated Will and Grace and a cruder, edgier, gayer Portlandia.

Our correspondent Maitland McDonagh thinks of it as a comedy of politically-correct errors set among the hipster set. But unlike Portlandia’s Carrie and Fred, this web series’ main characters Jackie and River are all about sex…even if they’re not having it with each other.

We first meet Jackie enduring her bawdy 40th birthday party where the slightly younger River is texting a potential sex-app hook-up while handing Jackie a surprisingly nice box of chocolates. The two connect pretty quickly thereafter, and continue flirting despite figuring out they’re really not compatible in, well, that way.

This razor-sharp series isn’t really the new Will & Grace, with the usual sitcom structure and predictable character beats. And it’s not an alt Modern Family, either, where gay daddies focus on the PTA and children’s parties instead of more … adult pursuits.

The Benefits of Gusbandry portrays a goofier, looser series of neurosis. Hey, it IS Portland, after all, where the only way to guarantee you won’t run into an ex is to boycott friends’ parties, the legal-weed emporium, local coffee bars, and some truly odd performance art. In this life, you have to suck it up and step out.

Jackie and River aren’t old, but they aren’t kids, either. They’ve got some miles on them, but they don’t whine about it. Those old jokes women make about boyfriends who are just gay enough (to like show tunes, to look sharp, to cook more than Kraft mac ‘n’ cheese) are a different kind of funny when said boyfriend turns out to be only gay enough to be, well, gay.

And Gusbandry doesn’t stop there; if it did, it would be just another comedy about a woman, fed up with what jerks men are, bonding with a “sister” of the opposite sex. Truth is, River’s flailing too: He knows his way around those hook-up apps but when a burly gent at a bar sends drinks and meaningful glances to the table he’s sharing with Jackie, they’re equally clueless as to who’s cruising who. The answer—”why, both of you”—is enough to send them both running for a pint of ice cream and a cozy besties cuddle.

As Jackie’s sweet and vaguely clueless dad puts it: “Gay has changed so much from when I was a kid.”

In both cases, we’ve come long, long way from I Love Lucy, no?

0 comments on “Odd Mating Rituals and Other Insights”