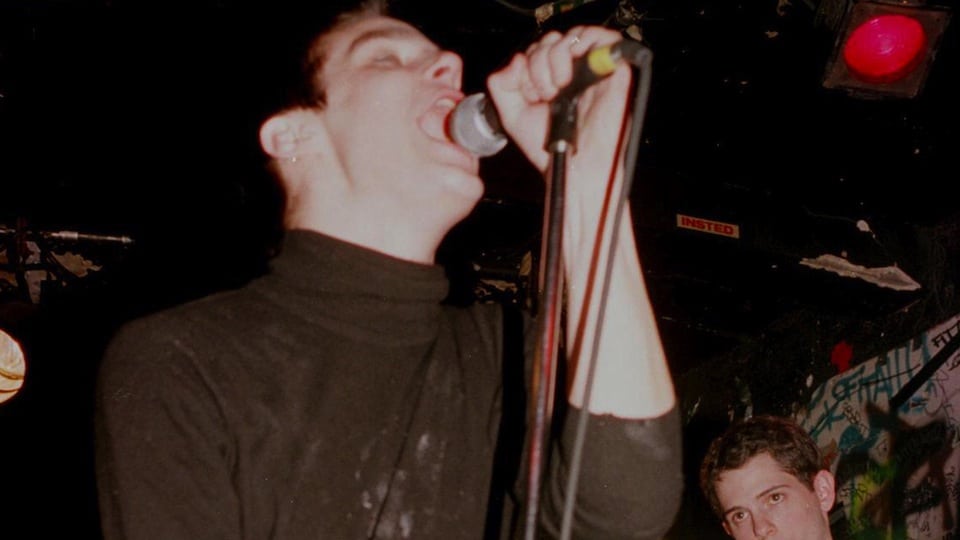 The higher the flight, the harder the fall. Sounds good anyway and it’s a pithy enough way to step into Jonathan Fire*Eater, a band whose brief, weird ride through the last days of the music industry distracted from some damn good songs. The recent passing of lead singer Stewart Lupton spawned a brief series of nostalgic reminiscences with headlines like “Last of the Shoulda-Been Rock Stars” but here’s a more personal one in case you missed the earlier posthumous paeans. The group began as a junior high ska band at the swanky St. Albans in Washington, D.C. — an origin story so “not punk” that it actually is. In 1993, after high school, they moved to NYC, more specifically the Lower East Side, even more specifically, the apartment downstairs from mine. Eventually, a friend introduced me to Stewart.

And so our friendship began. Sometimes, after I got off of work at midnight, he’d come tapping on my door, asking if I was busy and I’d shrug that, nah, I wasn’t. We’d sit around smoking cigarettes, drinking whatever was cheap, talking and playing records. (I still have a Cupid Car Club 45 he left behind in an effort to convince me of the genius of Ian Svevoinus. I remain unconvinced.)

He and the rest of Jonathan Fire*Eater were sharing a tiny apartment full of ashtrays and bunk beds, all of ‘em four or five years younger than me. Teenagers, really. Sometimes I’d contemplate whether Stewart was the cute boy you’d gaze at in study hall (because he had blue eyes and wrote poetry) or the creepy kid you’d avoid on the playground (because his hands were always damp and he would laugh to himself in this weird way). They moved out before I came to a decision. In truth, the answer was actually both. I didn’t know the rest of the guys that well — enough to exchange pleasantries at most; one of them let me occasionally mind his Dachshund at the bar.

Their first self-titled album came out in 1995 on the obscure Third World Underground label, a noisy set of odd, off-kilter songs. “The Oven, the Gas, the Dreams” lurching, distorted guitar and megaphone vocals was reminiscent of the Butthole Surfers or some other pre-’90s skronk, while “Lemonade” was a swinging chunk of garage rock evoking the Sonics. Most bands whose members haven’t hit drinking age are struggling to find a distinctive sound, but Jonathan Fire*Eater had that box checked. And it wasn’t just the Eddie Munster haircuts.

Stewart’s stage persona was a little like Montgomery Clift doing his best Andy Kaufman impersonation, but his lyrics were the more interesting contribution, sharply evoking a character or setting with a few half-focused details — ”my hands in my lap like two dead birds” or “the night coming down on crutches.” The throwback organ of Walter Martin was another distinctive aspect of their music, barreling through like a creepy carnival, while Paul Maroon’s jagged, noisy guitar worked more with broken riffs and distortion than melody.

In 1996, the EP Tremble Under Boom Lights was released and suddenly they were hot sh*t, launching a fleet of feature articles and record label expense accounts. I myself had hesitated to go see them because I was afraid they might suck and I didn’t want to have to throw the kids that side-eye one gives otherwise likable people who make lame art. But, when I did finally show, the hype was not unfounded. The concert was solid and the songs could have played in the background of a ‘60s Warhol movie, onstage at a downtown club in the ‘70s, or on college radio a decade later. “The Search for Cherry Red” caught me with a minimal, distorted guitar hook that sticks over a churning rhythm section; “Give Me Daughters” kicked an opening of white noise into a martial beat and lyrical swagger.

I’d run into Stewart in a bar or on a sidewalk — the guy had an aversion to permanent addresses — and he’d gamely listen to me rant about how “Voi Che Sapete” from Mozart’s Marriage of Figaro was a truly great pop song (“Well… what is she saying?”) or how some douchebag had just offered me a buck to ride the mechanical pony outside of Max Fish. (“You should have asked him for a hundred.”) I recall once sitting in that bar’s front booth, Stu and I alternately flirting with each other and the guy from DreamWorks or Interscope or Universal who had brought his own cocktail parasol and a line of overdone flattery and half-baked promises. There seemed to be a fleet of these guys perpetually hovering, whisking the lads off to the Marmont or the Niko or the Avalon.

Remember: This was back when the music industry was rolling high — you could make a f*ck of a lot of your own money and spend a f*ck of a lot of someone else’s. I recall crashing a Universal Grammy after-party where they rented out the entire Museum of Natural History and filled it with stilt walkers, 20-foot-long ice sculptures, 15-foot-high dessert displays, and open bars that were nothing but top shelf. You’d go to a show in a dive bar and half the audience seemed to be on a corporate expense account, I had a half-dozen friends with album advances. We rolled around the neighborhood like it was Paris in the ‘30s or Vegas in the ‘50s or London in the ‘60s and no one had any idea it would all be gone within a few years.

Like Tremble Under Boom Lights, the recording of the album (DreamWorks won the bidding war) was done at Greene Street Recording, a SoHo basement where I knew a handful of engineers, employees, and other musicians well enough that I would sometimes just drop by to hang out for an hour, be amusing and ornamental, maybe beat one of the Ween brothers at Tekken 3. However, the recording of Wolf Songs for Lambs was fraught and protracted. ”How’s it going over there?” was usually greeted with a rolled eye or furrowed brow. Occasionally friends would inform me of some twist of fate or lapse in judgment that had befallen Stu, which could be relied upon to produce an expression of “silent movie heroine in distress.”

A good set of signs emerged from all that angst and expense, though. “No Love Like That” was likely the closest thing to a single, with surf guitar and carnival organ, like a woozy Coney Island ride; “Station Coffee” came across as a delirious freight train with a siren-call guitar plus Stewart’s punk rock ranting like a polished version of the first album’s experimental attempts; “The Shape of Things That Never Came” sounded like a reverb-heavy tale of ruined parties and collapsed starlets with Island of Dr. Moreau atmospherics. Some critic were complimentary — I recall beaming proudly as a co-worker read out the bit in the Village Voice that compared them to the Rolling Stones — but others, not so much. The Los Angeles Times dismissed them as “hype,” part of which rang as a bit of the old LA vs. NYC rivalry. But then again, some of the band’s gigs were indeed not going well at all: a case of Stu vs. everyone else. No one was much in the mood to be supportive as the high-rolling days were about to end and when the buffet closes, everyone’s got a dirty look for the last guy with a full plate.

I’d still run into Stewart. I recall winding up hanging out on my couch, smoking and drinking again — a different apartment across the street yet with the same wacky-cracky landlord. Stewart had gone from fretting about third-billed gigs at the Continental to complaining about being tired after opening for Blur’s European tour. At least now he could afford to pitch in for the vodka. Meanwhile, I had gotten a job as music editor at a website and even though everyone shrugged off the internet as a flash-in-the-pan thing, they’d put me on the guest list anyway. He asked how I managed to keep my sh*t together and stay away from the worst of our local excesses. I muttered vague platitudes, unable to admit that I did not have my sh*t together at all. I just had a better game face.

And then it all collapsed in July of 1998 after a show in Central Park. (I recall watching one of the guys taking the stairs from the bandshell two at a time with a look of panic on his face, and thinking: Uh-oh.) Jonathan Fire*Eater dissolved from Next Big Thing to Cautionary Tale in the space of a deadline. Paul, Walter, and drummer Matt Barrick broke off to become the Walkmen —I recall seeing one of their first gigs at the old Brownies on Avenue A. After the show, we concluded, after a long sidewalk pause, that it was “fine.” As for bass player Tom Frank, he went into journalism, which is almost as good a place to figure out where cynicism meets idealism as rock n’ roll.

Stewart fled back to D.C., never again to suddenly appear before me in a crowded bar or empty street, he’d be grinning and waving at my obliviousness. He started another band, Childballads, but I had moved across the country by then, as far from that girl who spent a decade closing down Manhattan’s bars in a leopard coat as I could get. I occasionally imagined him off somewhere, writing poetry, playing songs, grown up. But he never really did. Sloughing off your youthful dreams as you get older is hard, even harder when you’ve actually owned them and worn them for the world to see. And because of that, I sometimes I wonder if that kid who used to sit on my couch and dream about recording contracts and European tours would have been better off without achieving that wished for sort of success. We’ll never know.