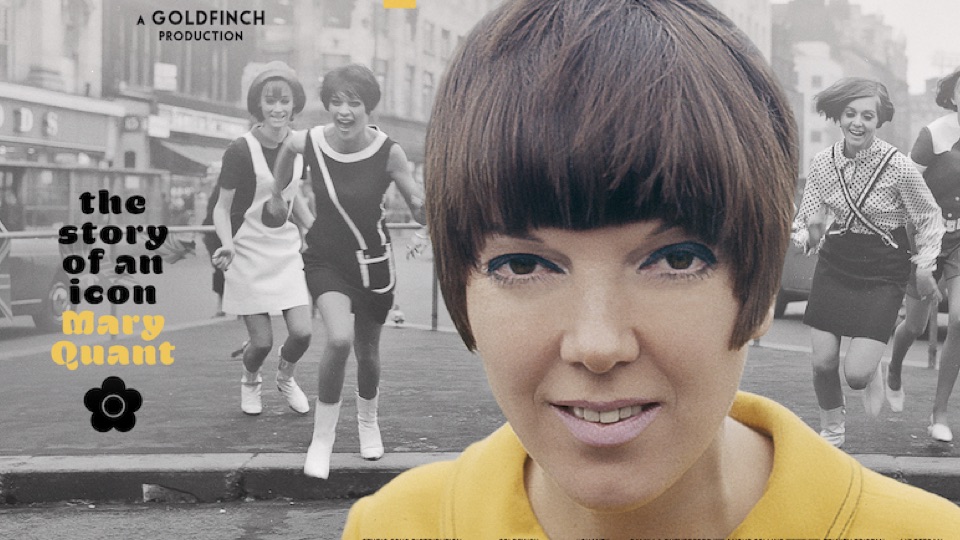 Premiering at this year’s BFI London Film Festival, actor Sadie Frost marks her directorial feature debut with Quant, an engaging documentary focused on legendary British fashion designer Mary Quant, often credited for inventing the mini-skirt. Known for her pioneering fashions and vibrant designs, the film traces Quant’s evolution from a fashion-conscious tomboy living in the Welsh countryside to a daring, avant-garde designer who raised eyebrows as well as hemlines.

Less about the titular designer’s personal life than it is a tribute to her legacy, Quant explores the impact that this trailblazing designer had on 1960s counterculture, the way that she revolutionized womenswear and her lasting footprint on today’s runways.

Through talking heads, archive footage, and dramatized scenes featuring actor Camilla Rutherford as Quant, we’re transported back to the Swinging Sixties in spectacular style. The dramatizations are particularly striking, shot in short segments that feel less like an interview and more like a fashion shoot, the camera zooming in on her eyes, mouth, and gestures, the sound often out of sync, reflecting Quant’s own experimental approach to art.

The doc really shines when it offers contextual history around the era, capturing the excitement around the British Invasion with clips of screaming Beatles fans and the hordes of young women trying on Quant’s latest fashions in her King’s Road boutique, Bazaar. We hear, through interviews, Quant explaining the success of her designs; how she understood the desires of young women to break away from their mother’s fashion choices and adopt a freer, more characterful way of self-expression. As the designer remarks in an opening snippet of archive footage, “I think the point of fashion is not to get bored looking at somebody. The point of clothes should be that one, you are noticed, two, that you look sexy, and three, you feel good.”

Through her bold, eye-catching, and undeniably daring designs, Mary Quant empowered her young contemporaries who were beginning to experience true emancipation – thanks in large part to the contraceptive pill that became available in 1961. But far from just being a rebel for rebellion’s sake, Mary Quant’s understanding of the zeitgeist came from her own everyday experiences. As she playfully remarks, “I liked my skirts short because I wanted to run and catch the bus to get to work.”

Given that Mary Quant is 91 and that the documentary was shot during the restrictive backdrop of the Covid-19 pandemic, it’s unsurprising that the designer herself didn’t take part in the film directly. However, versions of her own words are used over archive photography and clips of former interviews are underlaid with a punchy soundtrack courtesy of bands like Manfred Mann, The Kinks, and Florence + The Machine.

Frost also skilfully weaves a portrait of the designer through a collage of audio-only interviewees including model Kate Moss and The Who’s Pete Townshend, as well as to-camera offerings from the likes of  British Vogue editor Edward Enninful, Quant’s designer godson Jasper Conran, fashion designer Zandra Rhodes, and The Kinks’ Dave Davies, among others.

While the documentary’s core is firmly grounded in the sixties, the tail-end of the film transitions into the following decade, touching briefly on Quant’s new era of designs and the expansion into makeup, accessories, and homeware ranges. There’s a brief interview, too, with celebrated punk designer Vivienne Westwood during which she comments on “fast fashion.” Filmed while Westwood is at an outdoor protest, it feels a little out of step with the rest of the film’s gloss and glamour but provides, nonetheless, a heartfelt and pertinent postscript.

Though the film shies away from tackling some of the more difficult details around Quant’s struggle to keep hold of her name and the loss of control of her brand in later years, the director’s passion for her subject radiates throughout. As the co-creator of the fashion label Frost French, Sadie Frost feels expertly placed to tell the iconic designer’s story and brings a sparkling contemporary perspective to Quant’s legacy.

A fun and vibrant snapshot of one of the 20th century’s most evocative decades for fashion, Quant shows that the sixties will never go out of style.

0 comments on ““Quant”: How She Designed the Sixties”