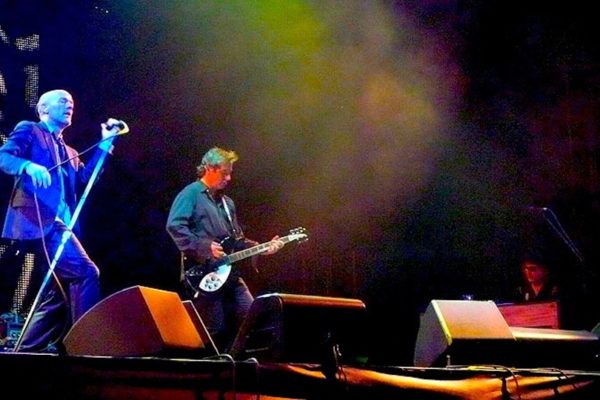 When I headed off to college in 1992, I packed three cassettes. Two were mix tapes made by my high-school best friend. With my sheltered upbringing and her relatively copious worldview, she was the Rayanne Graff to my Angela Chase, and the tapes were her attempt to elaborate upon my woefully truncated musical exposure up until that point. They contained mostly ‘70s-era, singer-songwriter, folk/pop/rock stuff: early Springsteen, Fleetwood Mac, Paul Simon — artists who, thanks to my friend, comprised the soundtrack of my adolescence. But the third album I brought with me was different. It captured how I hoped the future — my future, if not the future of music — might sound. Like how I wanted life to feel.

“Ooh, life. It’s bigger. It’s bigger than you,” Michael Stipe croons on “Losing My Religion,” the lead single off R.E.M.’s 1991 masterpiece Out of Time, which receives a 25th-anniversary reissue on November 18. Taken more or less literally, losing my religion was exactly what I dared to do back then. Yeah, of course I’d stop going to church now that I no longer “had” to, but more urgently, unleashed on a university campus and untethered from parents, suburbia and the role-playing expectations of high-school social strata, I could finally figure out who I wanted to be and what else the world held. To achieve was no longer first and foremost, as it had been during high school. Now, I could also explore.

More than any album I obsessed over in college (happily, my musical horizons expanded to include indie faves like Liz Phair, The Smiths and Sleater-Kinney, among others), Out of Time gave voice to those stuck-out-of-time (hey!) feelings I reveled in during those four years, incubating in the bubble of campus life, yet all the while relishing the idea of finally busting out. These days, R.E.M. may not be at the forefront of conversations about the college-rock heyday of the ’80s and ’90s (when I polled my Facebook friends on this topic, only one mentioned the band), but Out of Time is arguably their most existential album — and thus, quintessentially college rock.

With titles like “Near Wild Heaven,” “Belong” and “Half a World Away,” Out of Time’s track list emanates searching and yearning. (Even when a title does reference an actual and specific place, as in “Texarkana,” it’s one whose very name represents the in-between.) These are not expressly love songs, nor lust songs, nor breakup songs. To my mind, they’re almost panic songs, plaintive (if jangly) wails that leave you feeling compelled to tear out your own stomach and gnaw on it even if you’re not sure why. Collectively, they’re an intense, sincere and intimate rumination from Stipe, whose lyrics, in all but one cut, traffic entirely in first- and second-person I’s and you’s. It’s nearly as if Stipe is experiencing an out-of-body crisis — and yet, his optimism never wanes. “Me in Honey,” featuring vocals from The B-52’s Kate Pierson at her absolute sunniest, is joyful and warm and wonderful. And like “Stand” off R.E.M.’s previous album Green, “Shiny Happy People” (which also boasts Pierson vocals) bears the pearly sheen of a novelty number, but registers more deeply as a big-hearted, even dorky affirmation of bliss.

So why isn’t Out of Time mentioned more frequently among the superlatives of the college-rock canon? Quite possibly because the album committed the genre’s greatest sin: Achieving mainstream success. (Around the time R.E.M. signed with major label Warner Bros. for the 1988 release of Green, drummer Bill Berry remarked in an interview that the group’s fans “think of Warner Bros. as literally like a monster, just something that consumes and spits out.” Foreshadowing of their 1994 album, maybe?) Out of Time not only became R.E.M.’s first #1 album, but “Losing My Religion” remains its biggest-ever hit single. Perhaps not coincidentally, 1991 wasn’t just the year when R.E.M. tipped over from cool-kid darlings to worldwide pop-rock gods; it was also the year when indie as a whole — with a big assist from the arrival of grunge — erupted from the underground to dominate the mainstream.

R.E.M., I’d like to think, knew all of this was coming. The first lyric on the first track of Out of Time finds rapper KRS-One — in a brilliant, ahead-of-its time, cross-genre collaboration — lamenting, “Hey, I can’t find nothing on the radio.” In the very next beat, he instructs the listener, “Yo, turn to that station.” I was one of those new fans out there waiting, looking for a station I could turn to, hunting for a frequency that vibrated in time with my feverish, wide-open heart. R.E.M. may have forsaken college-rock credibility when they chose to go big, but what they offered in return was a chance for even the uncool among us — that’s me in the corner — to belong, belong.

Photo Credit: Public domain image of R.E.M. in Naples circa 2008.