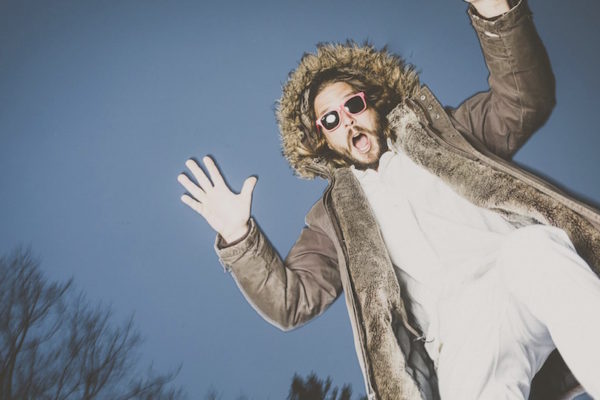 How do you celebrate the 10th anniversary of a cultishly revered, genre-defying, giddily eccentric record like Marco Benevento’s Invisible Baby? Do you release it on vinyl — perhaps in a limited edition of 1000 copies with some cool new cover art that features the work of painter Baptiste Ibar? Sure, you could do that. Or do you simply take the old album on tour and introduce it to a new audience while rounding up its original fans at the same time? Heck, you could do that too! And Marco Benevento is doing all of it… plus interviews. So let’s get right to the questions for this unusually talented musician.

Q: When Invisible Baby was originally released in 2008, it was nominated for an Independent Music Award as Best Jazz Album of the Year. Were you surprised how it was embraced by some in the jazz community? It seems to defy easy categorization.

A: I do remember when the record first came out, I was promoting it in New Orleans on WWOZ and the DJ played the first song “Bus Ride” and within the first 30 seconds someone called in and I thought to myself, “Awesome! Someone wants to know what this is” but it turned out that he was calling to complain about how the music wasn’t “jazz” and the DJ shouldn’t play this crossbreed of rock and jazz. And I thought to myself — “Oh sh*t, right some people are not going to like this and think that it’s not jazz.” To me, Invisible Baby has a heavy rock element but the songs are all instrumental. During that time I was very inspired by Brad Mehldau’s album Largo so, in my mind, it has that sort of vibe…. also both records have the same drummer, Matt Chamberlain.

See Related Article: “Sting’s ‘The Dream of the Blue Turtles’: A Bridge Between Pop & Jazz”

Q: Has the 10th anniversary of Invisible Baby been a prompt for you to go back and revisit the music afresh? What do you think when you listen to it now?

A: Well, a lot has evolved with the band since 2008 so when I listen to the record I am brought back to the days of playing smaller sit-down jazz rooms like Scullers in Boston… or Yoshi’s in Oakland… that music worked perfectly for those rooms and those rooms had well-kept baby grand pianos in them. Now we play rooms like The Bowery Ballroom in NYC and The Independent in San Francisco and the crowds are on their feet dancing. We tour with our own piano that is hot-rodded with guitar pedals and I have foot triggers that play ‘80s drum machine parts; so things have changed slightly (to say the least!) and not to mention I am singing for about half the show now too. I gotta say though, we still play about half the songs on Invisible Baby most every night and they still fit into the set and people really enjoy hearing those “older” tunes like “Atari” and “The Real Morning Party.”

Q: From the get-go, Invisible Baby offers a not-what-you-expect experience. The opening instrumentation of “Bus Ride” — Mellotron then banjo then drums and cymbals — leaves you wondering what the hell might come next. What’s the most unusual instrument on the album?

A: Actually, fun fact about that banjo line; Trey Anastasio (from the band Phish) wrote that part. Back in 2006 we toured for about three weeks together and I was writing a lot of those tunes on that tour and he curiously popped over to my bunk and said “Let me check out what you are up to,” and within a few seconds he was coming up with different ideas left and right. I think you nailed it though—the most unusual instrument might be the banjo! Unless you think a circuit-bent children’s toy is weird, which is what opens the song “Ruby.”

Q: Can you tell us about some of the children’s toys that were converted into instruments for this album? What’s your process here?

A: My friend Tom Stephenson from Chicago has a band called Roth Mobot and they play experimental noise music with modified toys that you buy at thrift stores. Basically, that process of modding those “instruments” is called “circuit bending” and when I first heard these “toys” I freaked out; I loved the sounds they made, was drawn to them and used them as “ear candy” to help me compose. For some musicians that could be interesting and for some maybe not so much, but regardless, I was completely captivated by the weirdness of these sounds and used them to help me compose and perform.

Q: Aside from some laughs on “Ruby,” Invisible Baby is pretty much an instrumental album. That said, is there a tune on the album you can imagine adding lyrics to? You’ve definitely got some hummable melodies in the mix.

A: My friend and musical cohort Charlie Hunter came to a show back in 2009 or so and heard “The Real Morning Party” and actually called me the next day (I wished I saved that voicemail) saying how much he thought that song was basically an instrumental version of a song that had lyrics! So I guess my first choice would be that song. It’s so close to having words without having them! I always felt like “Record Book” would be cool with lyrics too…..who knows, maybe some of those tunes will come back with a singer one of these days.

Q: Will you be touring in support of the re-release? What’s your favorite city to play in?

A: Actually we are currently touring and promoting the re-release of the record. We just did a tour down south (Nashville, New Orleans, Birmingham etc.) and a lot of people scooped up the new vinyl pressing of Invisible Baby on the tour. I gotta say on that particular tour we played at Saturn in Birmingham and that show totally rocked. The house was packed, people were dancing and completely engaged in the music, it was a nice surprise for our very first show in Birmingham AL, so currently, my favorite place is there!! Although I have to mention that back in 2009, we played at Carnegie Hall (opening up for the incredible Jamie Cullum) so that venue is high on the list too.

Editor’s Note: Want to get one of the 1000 vinyl copies of Invisible Baby? Here’s where you can order your own copy.

0 comments on “The Rebirth of Marco Benevento’s “Invisible Baby””