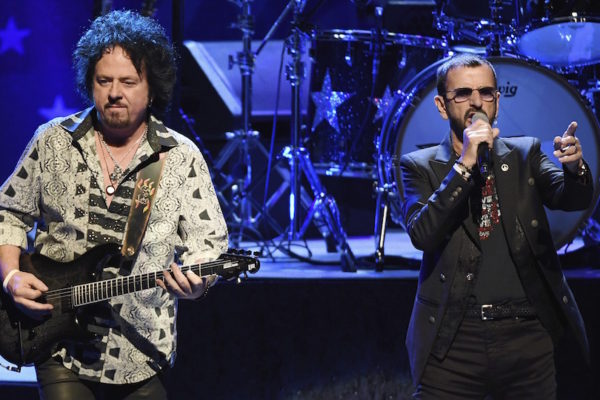 Ringo Starr likes to be in a band. He was never one to park himself behind a drum kit and practice in an empty room. He’s always liked to hear the beat mixed in with the sounds of a guitar and a bass. It’s always been that way. But what do you do when you’re a member of the biggest band in the history of pop music and it all ends by the time you’re 30 years old? Athletes at 30 are halfway through their careers. Musicians at 30 are just getting started. Well, it turns out Ringo was just getting started, too.

After all, Ringo enjoyed a successful solo career, especially from 1971 to 1975. He managed eight top ten hits and two number one singles: “You’re Sixteen” and “Photograph.” But it wasn’t until 1989 that Ringo [amazon template=right aligned image&asin=B0000009O1]Starr formed his “All-Starr” lineup. That supergroup’s first incarnation featured Joe Walsh (his brother-in-law), Dr. John, and Billy Preston among others. Since then, pedigreed musicians such as Dave Edmunds, Randy Bachman, Peter Frampton, Greg Lake, Billy Squier, and John Waite have all toured with the group. Remember, Ringo likes being in a band. And being in a band with the likes of these guys had to be a blast.

Ringo’s twelfth version of his supergroup has remained unchanged since 2012. Nowadays, playing with the former Beatles drummer are Todd Rundgren, Gregg Rolie of Santana, Steve Lukather of Toto, and Richard Page of Mr. Mister, as well as Warren Ham and Gregg Bissonette. After five years on the road, this band’s shows are seamless and eclectic (as if Ringo being a Beatle weren’t reason enough to see him).

Austin’s ACL Moody Theater hosted Ringo & His All Starrs earlier this year on Halloween night. While the merch table may have been all things “Peace, Love, Ringo,” the sounds coming from the stage were much more varied. This is a band with power, and there were plenty of hits in their 24-song set-list that showed just how much power that was. And while Starr might headline the group, he also has no problem sharing the spotlight. In fact, he seems to relish it.

Dual drum kits afford Ringo the opportunity to sing center stage — like most any front man — which he does on tunes such as “It Don’t Come Easy,” “Don’t Pass Me By,” and “Yellow Submarine,” leaving Bissonette to take over on percussion. When other band members like Lukather and Rundgren takes the mic on “Rosanna” and “I Saw the Light” respectively, neither drummer bows out. Instead both men hit the skins with mesmerizing synchronization.

As you can tell, this is not just a lineup of Ringo’s greatest hits. Seeing the All-Starrs means being treated to chart-toppers from Toto (“Africa,” “Hold The Line”), Santana (“Evil Ways,” “Black Magic Woman”), Mr. Mister (“Kyrie,” “Broken Wings”), and Rundgren, too (“Bang the Drum All Day,” “Love Is the Answer”). Rollie and Lukather may not be household names, but you know their songs…by heart. Trust me.

In short, the crowd at the Moody Theater may not have been out trick-or-treating for candy that night but they got their fair share of treats — a couple of them unexpected. Ringo sang “What Goes On”, which bears the distinction of being one of the songs in The Beatles’ catalog with songwriting credits going to Lennon, McCartney, and Starr. (Sorry, Mr. Harrison.) He also served up his own versions of famous Beatles’ covers like “Act Naturally” (Buck Owens) and “Matchbox” (Carl Perkins). If you’ve been keeping count, you’ll have noted that the show featured roughly a half-and-half mix of Ringo songs, and songs from the rest of the All-Starr’s.

Remarkably, Ringo’s voice sounds almost unchanged since his Beatles days. Somehow his admittedly limited vocal range has preserved his sound as a singer. This man is 77-year-old. He‘s a great-grandfather. And yet, he tours with his musical pals because that’s what musicians do. They play. Music fans, not just fans of the Beatles, are all the better for it.

PS. Another look at some of Ringo’s music.  And think of it as our own “merch table” — with fantastic upscale Beatle swag.