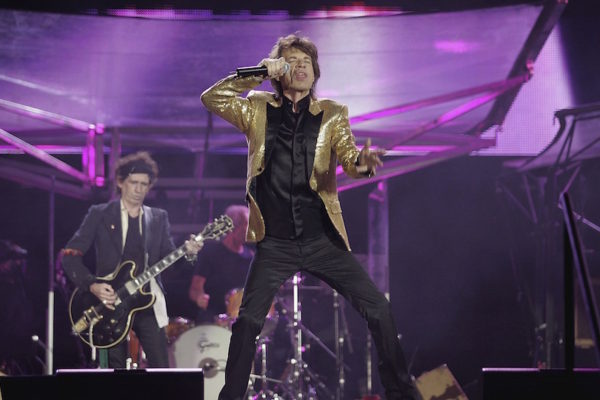 You probably already know that Presidents’ Day occurs on the third Monday of every February. That means no school, no mail, no work (for the lucky), and extra savings on mattresses for all. Plus good old rock n’ roll! Wait, what? Okay, every day is a good day for rock, but especially Presidents’ Day, since it turns out many presidents’ names have been inserted into rock lyrics for quite a few decades. Songs by everyone from The Stones to Sting have mentioned Kennedy and Reagan, as well as Truman and Polk. Check out our small sampling.

The Rolling Stones’ “Sympathy for the Devil” (1968)
Jagger’s lyrics recount some of mankind’s most horrific atrocities, as told by the Devil himself  — which didn’t stop Rolling Stone magazine from ranking this single from Beggars Banquet as the 32nd greatest rock song of all time. This Stones tune reminds us who we are as a people, and it’s not that pretty. “I shouted out, ‘Who killed the Kennedys?’ When after all, it was you and me.” There are quite a few songs that mention JFK — Tori Amos’ “Jackie’s Strength,” the Misfits’ “Bullet” — but this one gets the nod for including brother Bobby, who was assassinated after winning the California presidential primary in 1968.

Crosby, Stills, Nash & Young’s “Ohio” (1970)
Perhaps the greatest protest song ever written, “Ohio” was Neil Young’s reaction to the tragic Kent State shootings of May 4, 1970, when four unarmed college students were gunned down by Ohio National Guard soldiers during a Vietnam War protest. “Tin soldiers and Nixon coming, we’re finally on our own. This summer I hear the drumming, Four dead in Ohio.” Heard 50 years later, “Ohio” remains as shocking and upsetting as ever.

Chicago’s “Harry Truman” (1975)
Another chart-topper, Chicago’s “Harry Truman” climbed all the way to number 13 on Billboard’s Hot 100. Written by Robert Lamm, the tune longs for the days of a straight-talking, honest leader, following the days of a corrupt Nixon presidency that led to that president’s resignation. “America’s calling Harry Truman. Harry, you know what to do.” Yet despite its popularity back in the day, this Chicago hit gets relatively little airplay today. Play it on President’s Day.

Sting’s “Russians” (1985)
Sting’s 1985 solo debut The Dream of the Blue Turtles cemented his superstardom and produced four top 20 hits, “Russians” among them. Sting wrote the song, which peaked at number 16, in order to point out the utter madness fueling the Cold War. Addressing the president of the time, he quips, “Mr. Reagan says ‘We will protect you.’ I don’t subscribe to this point of view,” before decrying the policy of Mutually Assured Destruction and what it means for future generations.

Elvis Costello’s “Eisenhower Blues” (1986)
Blues master J. B. Lenoir wrote this song in the 1950s, but his record company forced him to record it under the title “Tax Paying Blues.” When Costello covered it on his album King of America, he was able to give it its original title again. But ultimately, some things never change. Paying taxes is always a drag, no matter how you sing it.

Billy Joel’s “We Didn’t Start the Fire” (1989)
This number one hit from 1989 chronicles historical events spanning a good part of Joel’s lifetime. Clocking in around four minutes, the lyrics mention Eisenhower, Truman, Reagan, JFK, and Nixon. The music video features some disturbing images but has nevertheless been spoofed repeatedly over the years, most recently by Barry on an episode of ABC’s The Goldbergs.

They Might Be Giants’ “James K. Polk” (1990)
Teacher: “Class, today you will write a song about a U.S. president.” They Might Be Giants: “Hold my beer.” History instructors, rejoice. You now have 3:16 seconds to kick back while your students listen to this oddball tribute to Polk, the eleventh president of the United States of America. Heck, play it twice. This bit of quirkiness is a major hit with the band’s hardcore fans, and why not? It’s not only educational, it’s fun.

PS. Sting’s “The Dream of the Blue Turtles” was a big step forward. And this “Making of the President” doc is eye-opening.

0 comments on “Rock Gets Presidential”