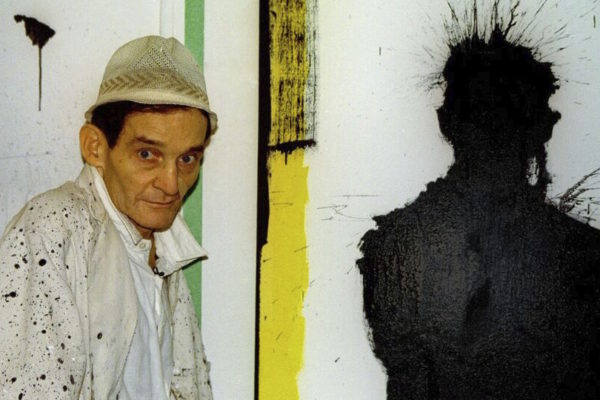 When it comes to street art in 1980s NYC, the big names were Jean-Michel Basquiat, Keith Haring, and Richard Hambleton. That last name might not be as well-known nowadays but back in the day, Hambleton was “painting the town black” as he put it with hundreds of guerilla-style, life-sized silhouettes all over the city, then eventually in London, Paris, Rome, Venice — even on the Berlin Wall. But that’s just one part of his remarkable story. You can learn the rest in Oren Jacoby’s Shadowman, a fascinating (and frankly, heart-wrenching) documentary about this remarkable artist who sadly passed away last month. Jacoby graciously took some time to discuss the film and his muse, among other things.

Q: Richard Hambleton, the subject of your film, actually died earlier this month. Did he get to see the film before he passed away? What was his reaction?

A: I’m so glad that Richard did get to see Shadowman. He came to its premiere at the Tribeca Film Festival. He was a little agitated near the end of the film, when it revisits an episode where he was cheated by an art dealer. So he got up and walked out, a few minutes before the end credits. But when I ran out to check if he was okay, he assured me that he really liked the film. A few days later, he sent me an email — the only one I received from him over the eight years we knew each other — in which he thanked me for making it.

Q: Hambleton painted his street art of black silhouettes literally all over the world — NYC, Venice, Berlin… Do you have a favorite piece? Where is it?

A: Sadly, as far as I know, none of Richard’s black silhouette shadowmen (on the street) have survived, despite the fact that he painted hundreds of them in New York City alone. I’ve never seen any of the others in Europe, though someday I hope to have a look at the section of the Berlin Wall he covered with “shadowmen” which is preserved in the Check Point Charlie Museum.

By far my favorite of his street works (when they still graced lower Manhattan) was a very unusual piece for him. It was a sculpture, in which a group of eight or so life-size men in suits appeared to be marching towards you. They all carried briefcases — each one covered with a mirrored surface — and were holding them flat across their chests so the reflected sunlight seemed to emanate from their bodies. I happened upon this sculpture in 1980, wandering on the sandy beach-like strip that ran along the Hudson River, where Battery Park City and Stuyvesant High School now stand.

Shadowman from Visionaireworld on Vimeo.

Q: This film took over five years to make. How did that length of time influence your creative process?

A: Shadowman actually took over seven years to make. I’d have to say the schedule was dictated more by practical necessities than the creative process. I could only film Richard when he would give me access, which was an intensive burst in the first three to four months and then extremely rarely for a number of years. And I could only work on other aspects of the production when I had funding, which was intermittent and extremely hard to raise.

As many documentary filmmakers in recent years have learned, Time can work against you, but it can also work for you. As a story plays out over an extended period, it can get richer. You also have the opportunity to go deeper into your subject, if you dare. A long schedule can also mean that you have more time to get lucky, which we certainly did, in our discovery and acquisition of extraordinary archival footage.

Q: Some of your previous documentaries have also focused on artists: playwrights Suzan-Lori Parks and Sam Shepard, Benny Goodman… Are there any other artists out there on which you’re itching to make a film?

A: I’ve wanted for a long time to make a film about Chrissie Hynde of The Pretenders. Maybe someday! But I’m always open to new ideas.

Q: Is there a contemporary street artist you discovered while making Shadowman whose work you think deserves a larger audience?

A: I wish more people knew about Angel Ortiz a.k.a. LA II, the brilliant street artist from lower Manhattan. He told us in the interview for Shadowman that in 1980, at the age of 13, he taught 22-year-old Keith Haring how to do graffiti. Over the next several years he collaborated with Haring on hundreds, if not thousands, of artworks. He was promised that his share of profits from the sales were being put in a trust in his name. However, when Haring died, there was no trust and no recognition or royalties for Angel Ortiz, despite the millions in profits over the years, from the work they did together.

Q: In an interview with nofilmschool.com, you mention Fellini as an influence on your work as a documentary filmmaker. Are there other filmmakers (outside the world of documentary) who you feel have impacted the way you work and how so?

A: The lesson from Fellini was to embrace your obstacles, they’ll become your friends and, if you let them, they’ll make your film better. The great anthropologist filmmaker Jean Rouche tried to straddle the separate worlds (or maybe planets) of documentary and fiction filmmaking. He would use cinema verité techniques and have his subjects improvise stories that were inspired by their own lives, in films like Jaguar and Moi, Un Noir (showing in a retrospective at New York’s Film Forum in January.) I tried to do this in my first film, Hometown, and would love to do it again someday! Rouche was my first in greatest inspiration to become a filmmaker. The other was Athol Fugard, known more for his plays than his films. From him, I got the impetus to try and look to the ordinary things around you and the things that are a part of you or deep inside you, for your subjects.

PS. Jacoby hopes to do a doc on this bad-ass rockstar; her bio should provide lots of material.  And how the Tribeca Film Festival can help you find great movies to watch.

0 comments on “Shedding Light on the “Shadowman””