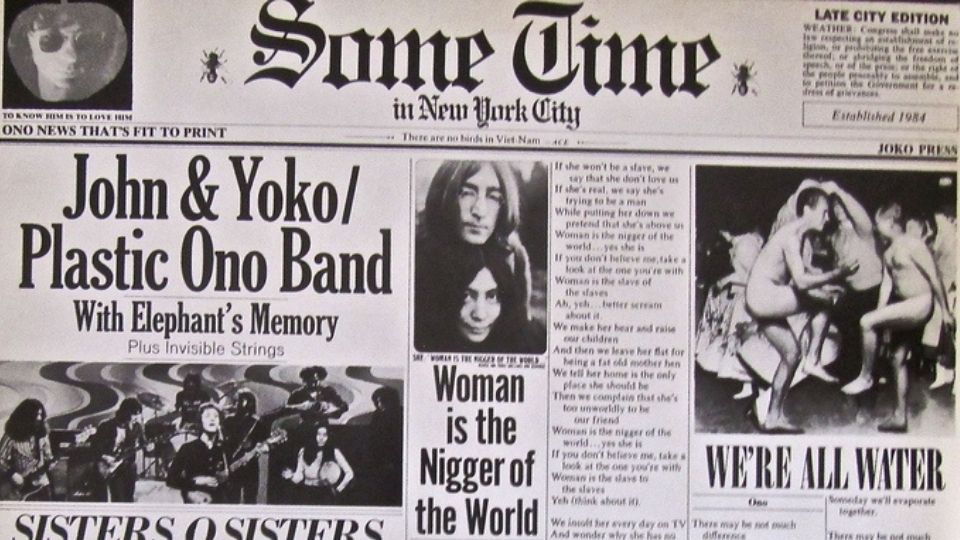 Almost fifty years ago, in 1972, the Plastic Ono Elephants Memory Band — consisting of rhythm guitarist and lead vocalist, John Lennon; occasional organist and lead vocals, Yoko Ono; bass player, Gary Van Scyoc, lead guitarist, Wayne “Tex” Gabriel; organist, Adam Ippolito; saxophonist, Stan Bronstein, and drummer, Rick Frank, Jr. — were in the Record Plant, working madly away on a concept album that was far ahead of its time. Dubbed Some Time in New York City, the LP was to be a musical “front page” of the day’s headlines, wrapped in the Lennon’s hot-off-the-press reactions to “all the news that’s fit to print.” Confronting controversial topics such as women’s rights, marijuana usage, political imprisonment, racism, prison reform, and the perverse occupation of Northern Ireland by England, the Lennons and their no-holds-barred New York City bar band, held nothing back in demanding equality, social justice, and liberation.

When the LP was released, however, it was panned by critics as inappropriately political. And the catchy slogans that John Lennon had created as “ear worms,” designed to inspire change, were labeled “corny.” Today, however, modern criticism is beginning to shift — to recognize this bold, uncensored album was forward-thinking and “woke.” Recently, Jude Southerland Kessler of The John Lennon Series sat down with POEM band bassist, Gary Van Scyoc, to relive those exciting days in which Some Time in New York City was created and to talk about the other exciting projects that the Elephants Memory Band worked on with John and Yoko.

Jude Southerland Kessler: Gary, thanks so much for taking time out to share these great memories with CultureSonar. It’s thrilling to see Some Time in New York City finally get the credit it deserves! It’s a really vital, bold, hard-hitting record, and I know it must have been a thrill to be invited by John Lennon and Yoko Ono to back them on this LP. Give us some background on Elephants Memory Band. Out of all the magnificent groups in the New York City area, why did John choose yours?

Gary Van Scyoc: Thanks, Jude. You know, ’71 was a very political year. Elephant’s Memory was doing a lot of political rallies. That was our “main thing,” really. We did concerts at NYU for voter registration, played live in Washington Square Park and the Loop Center at NYU, and performed at Columbia University was one of our regular gigs. We were the “go-to band” for anything political. We were tied into the Village Voice through Toby Mamis, a popular writer back in that day. He was a good friend and hung out at most of our gigs. We befriended Jerry Rubin – the political activist – and Abbie Hoffman and others from “The Chicago 7.” The Hells Angels in the East Village embraced us and became our protectors.

Toward the end of 1971, we finally got a chance to play a couple of live shows out on Long Island; one of them (with Billy Joel as our opening act, by the way) was at a radio station called WLIR. They set you up in the studio, and you played, and they recorded it on 7-1/2” tape. WLIR made some nice cassettes for you at the end of the gig, and you went on your way. Well, our drummer, Rick Frank, slipped that cassette tape to Jerry Rubin. Jerry played it for John and Yoko. This was probably the third week of December, a little before Christmas, 1971. And John and Yoko got word to us that they loved the tape…felt like we had a lot of soul! We heard that John and Yoko weren’t going to be playing with Eric Clapton anymore. In fact, that whole jet-set thing for them was over. They wanted to get away from that aura and the drugs, and they said we had all the ingredients that they were looking for.

They liked Wayne “Tex” Gabriel a lot. He was an awesome guitarist! He just jumped out of the tape to them, and then, to have somebody like Stan Bronstein in the band. Incredible! Adam Ippolito was a phenomenal keyboard player…like Nicky Hopkins “on steroids,” if you will. And I played on the low-end bass, exactly like Klaus Voormann did, with that same rock R&B sound. John thought it all just clicked! We had everything he needed.

Kessler: So, you got together with John and Yoko in early 1972. Did they tell you that the LP you were going to be making was highly political…that you were going to be singing songs supporting John Sinclair and Angela Davis, and protesting the presence of England in Ireland?

Van Scyoc: (laughing) Not at all! I mean, once we got the drift of where the songs were going…Well, the first song was “Sunday Bloody Sunday” about the occupation of Ireland. Hello?! So, right there we knew how this LP was going to go down. I was innocent to the fact that John might go as far as “Woman is the N***** of the World,” because I hadn’t heard that one yet. That [track] came along in the middle [of production] somewhere, and I remember Adam and I looking at each other in the hallway after we heard the lyrics for the first time and going, “Holy Crap!” (laughing)

Kessler: So, what are your memories of making that really brave, innovative political LP? When you think back, what sticks out in your mind?

Van Scyoc: Just working with John. I really got into it! I loved working with John. And one of my best memories of those studio sessions happened actually at the end of that song, “Woman is the N***** of the World,” when it goes into that part: “We make her paint her face and dance,” that vamp at the end. It’s almost hypnotic and it’s in a weird time signature and there’s a lot of tension in it. John and I were set up in the studio at the Record Plant only about 6, maybe 8 feet apart. He was just right there, you know? And right at the end when we started that big vamp-out, that outro, we just made eye contact and…when you make eye contact and you’re creating [something] like that…we just locked into each other and rode out the end of that whole song. That was my best connection with John during the recording! What a musical moment that we had together! That’s what I’ll always remember.

Kessler: Well, I know that Phil Spector was working with John and Yoko at first, but that was unsuccessful, so John took over the production of the album. How was John as a producer?

Van Scyoc: John was a “take care of business” guy, you know? He was – I don’t want to say a slave driver – I’ve dropped that name a couple of times – but that’s not true. It wasn’t that. John was so serious that I was really impressed. There weren’t hour-long breaks where we were smoking joints and having fun. John’s attitude was, “We’re running this set. This is serious. We’re taking care of business here.”

I liked that structure. I liked that because that’s the way real recording sessions are run, which is what I did all day long [back when I was a professional] studio player, playing jingles…when I would phone in to book daily jobs through a company called Radio Registry. Look, John was also a “take care of business” guy. That’s why the band sounded fairly good, you know.

A lot of people don’t realize that John was thinking about a world tour with us – a tour that he was trying to organize. He had bought about $160,000 worth of gear, had custom road cases made with Apple Records so it would all be ready to fit into aircraft. It was all in place! It just never happened because John never got his green card, and he was afraid that if he left the country, he wouldn’t be able to get back in.

Kessler: Now, Gary, the Plastic Ono Elephants Memory Band did much more with John and Yoko than just make the LP, Some Time in New York City. In fact, POEM (as John liked to call the group) was really busy in 1972, establishing itself as a band and preparing for John’s visionary world tour. Right?

Van Scyoc: Yeah, chronologically, the year began with The Mike Douglas Show, and then, we went into the Record Plant, to record Some Time in New York City. We took maybe a week break after that and went right back into the Record Plant, with John producing us, to record the Elephant’s Memory Apple album. Then, in May, we appeared on The Dick Cavett Show. After that, there was a little bit of a break, because John and Yoko were traveling around everywhere, looking for Yoko’s daughter, Kyoko, who had been taken by her first husband, Tony Cox. But when they returned, we found out that Geraldo Rivera had invited us to perform in August at Madison Square Garden in this huge benefit concert, the “One to One Concert.” So, for a couple of weeks, we rehearsed for that at the Fillmore East, of all places! What a wonderful place to rehearse! It was great! And (laughing) we were just around the corner from our buddies, the Hells Angels, so we became “Kings of the East Side” there for a couple of weeks!

Kessler: You really were riding on top of the world! But then, sadly, several major events conspired to change the entire picture, didn’t they?

Van Scyoc: Yeah, just one disappointment after another, really. The biggest disappointment was that John never got his green card, so we couldn’t tour. But also, none of us anticipated that Some Time in New York City would flop and that John would get panned for it. And then, some of the reviews of our performance at the “One to One” concert weren’t that great. That was deflating. But I guess the final straw was when Nixon won the presidency again, you know?

Kessler: Well Gary, I know it’s been a long time coming, but the critics are starting to see how forward-thinking Some Time in New York City really is. The album speaks out courageously for women’s rights and prison reform and social justice and freedom. It’s very “today.”

Van Scyoc: Well, thank you. I appreciate that! (Laughing) You’ll get no argument from me!

Kessler: I think the album really had two things going against it: 1) In 1972, people were still expecting John Lennon to be “Beatle John” and he wasn’t! And 2) The public criticized Yoko’s singing. But if you go back now and listen to “Luck of the Irish” or “Angela,” you know what? It isn’t so bad!

Van Scyoc: How about John and Yoko singing together on “Angela”? It’s kind of sweet. They did a nice job! They probably worked on it a little bit more than usual at home – getting all the phrasing together. And it paid off. It’s a good song.

Kessler: I agree! And you and I are going to continue this conversation about the album, taking it track-by-track with my friend, Lanea Stagg of the Recipe Records Series (https://www.laneastagg.com). We’re going to look at each song: how it was recorded and what it’s all about. So, Gary, Lanea, and I are inviting all of you to click on this link:

where you’ll hear Gary reveal even more wonderful stories about the magical “time in New York City” that he spent with John and Yoko, a time of political activism so akin to 2021. Gary, thank you for joining us on CultureSonar, and I’ll “see” you on the podcast!

For more information on Gary Van Scyoc and for great photos of the Plastic Ono Elephants Memory Band, go to: https://www.facebook.com/search/top?q=gary%20van%20scyoc%20fan%20page

2 comments on “Some Time in New York City and POEM: 50 Years Later”