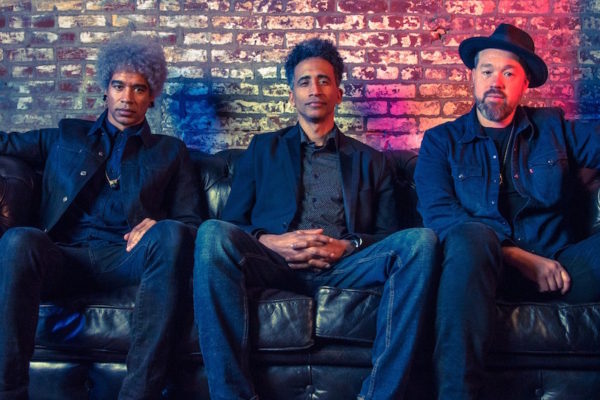 While Soulive has put out albums on well-known labels like Blue Note (Doin’ Something, Next, Steady Groovin’) and Stax (No Place Like Soul), their last half-dozen releases have been on Royal Family Records, an indie label focused on digital distribution and cofounded by members of the band. This switch has allowed the jazz-funk trio to engage in some interesting experiments as evidenced by Rubber Soulive, their LP of Beatles covers, and Cinematics Vol. 1, a recent collection of imagined movie music. CultureSonar reached out to two of the group’s regulars – drummer Alan Evans and guitarist Eric Krasno – to learn more about works past and present.

Q: Soundtracks were made to accompany action. What kind of activities would you like to see people doing when they’re listening to your soundtrack? There’s definitely an upbeat groove throughout the EP.

AE: I guess I look at Cinematics Vol.1 more as a score than a soundtrack. The way I’ve been looking at it is this record is like the score/soundtrack for the movie in the listener’s mind. So this can be adapted to their life and perfect for anything!!

EK: I think people could really be doing anything to this music. Cooking, driving, drinking. The point is you don’t have to think too hard, it’s a perfect backdrop for your day.

Q: Your imagined scores weren’t overly preconceived, but grew naturally out of time in the studio. Because of that, they feel organic and fresh as opposed to overly intellectualized. But now that you’ve put out a Volume One, are there any film genres you’re dying to tackle for Volume Two?

AE: Well Cinematics Vol.1 was recorded and mixed in two days. The concept for the name came towards the end of the first day after we were listening back to one of the tunes. So your observation is correct in that happened organically without overthinking it. We do have plans for more volumes but we won’t be thinking about any film genres. We’re just going to record what comes out naturally.

EK: We haven’t really thought about that yet. The whole idea of this series is that we get together and come up with things in the moment. That seems to work well with Soulive. We know each other well enough that we can work off of each other‘s instincts and create something we like.

Q: You guys have put out over a dozen albums since 1999, all the while working on various projects separately. What keeps drawing you back to collaborate? Is there something you get from Soulive that you’re not finding elsewhere?

AE: Every musical situation is different because of the individuals involved. Some are better than others but with Soulive, we never have to talk about what we want to do or what we want each other to do. It just happens and we have a great time doing it. That makes it really easy to keep playing together.

EK: We just genuinely love playing with each other. We’ve created somewhat of a musical vocabulary amongst us that enables us to improvise well together. Also, Soulive has a lot of material that we’ve written over the years which makes our live shows interesting for us. We don’t have to play the same thing every night.

AE: I can’t say that I’ve been searching out any younger generation film/tv composers on a regular basis but two people who hit me recently are Michael Stein and Kyle Dixon who compose the music for Stranger Things. They knocked it out of the park with that!!

Q: If you could score any silent movie with Soulive what would that be?

AE: It would be really hard to pass up doing Soulive’s score to Metropolis. It’s just such a stunning film. That would be so much fun.

EK: I think part of the reason we ran with this concept is that we would like to see people use this music for their own scenes etc. I’m not sure what kind of film we would make but I have a feeling it would be pretty psychedelic.

Q: Do you have a favorite film score of all time?

AE: There are so many great film scores, but Star Wars would have to be right at the top of my favorites list. A lot of people may not realize this but almost every second of that movie has music. That’s just incredible.

EK: I really like Planet of the Apes, I frequently go through passages from that when coming up with sounds and samples for tracks.

PS. A few takes on modern soul that you should know about. And some of the best Grammy-noted movie songs.

0 comments on “Soulive Brings the Score, You Live the Movie”